Some marketers think the humble banner ad is a thing of the past.

Why are some marketers spending so much? 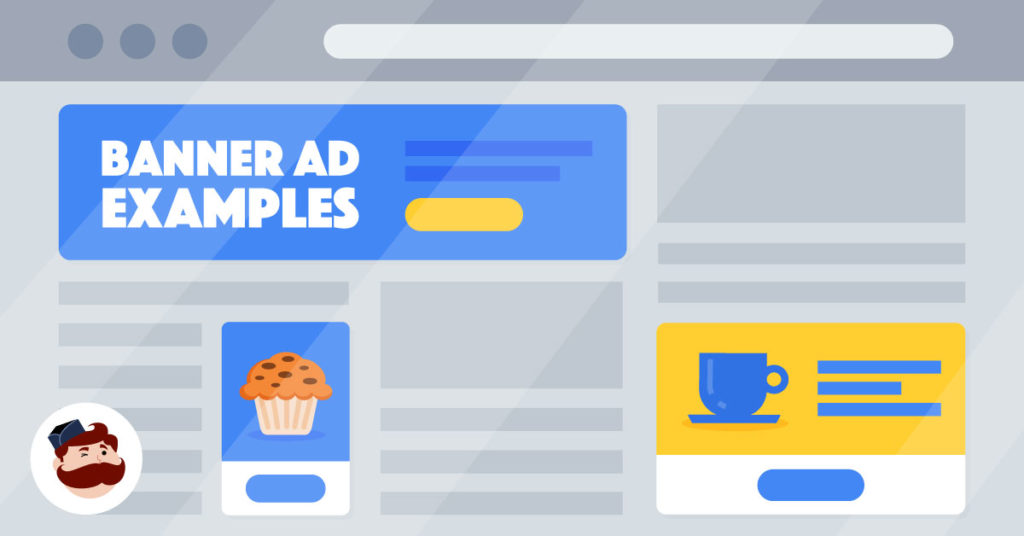 Because with HTML5-powered animation, and better targeting options than ever, banner ads work.

But only if you know how to design a banner ad effectively.

That’s why in this article, we’ll cover 21+ banner ad examples and break down why they work so well (and how your business can do the same).

What Are the Different Types of Banner Ads? 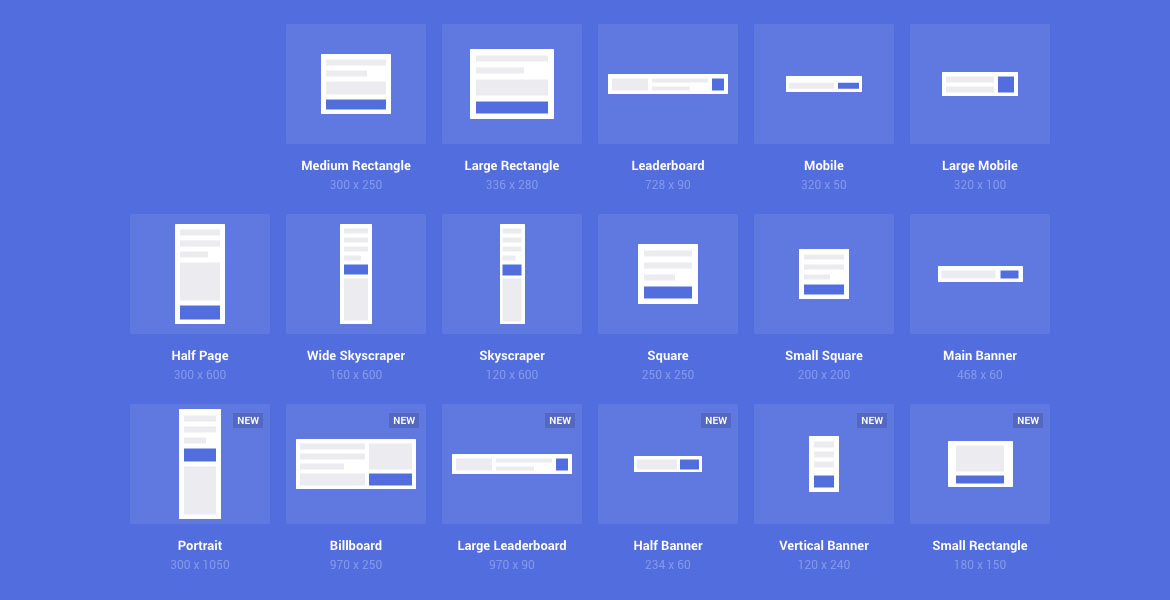 The idea of a good banner design, and how you can target potential customers has changed completely over the years, but the most important formats are still the same.

Large horizontal ad at the top of a page. Often includes more than one clickable image with unique links.

Large vertical ad, typically placed in a sidebar or menu. Often includes more than one clickable image with unique links.

Square ad spread throughout the content, typically used as in-content ads, or in the sidebar.

With banner sizes mostly unchanged, some advertisers in 2020 still bid for the same ad unit they did ten years ago.

In this section, we break down over 21 examples of banner ads that work in 2020.

Let’s jump straight into it. 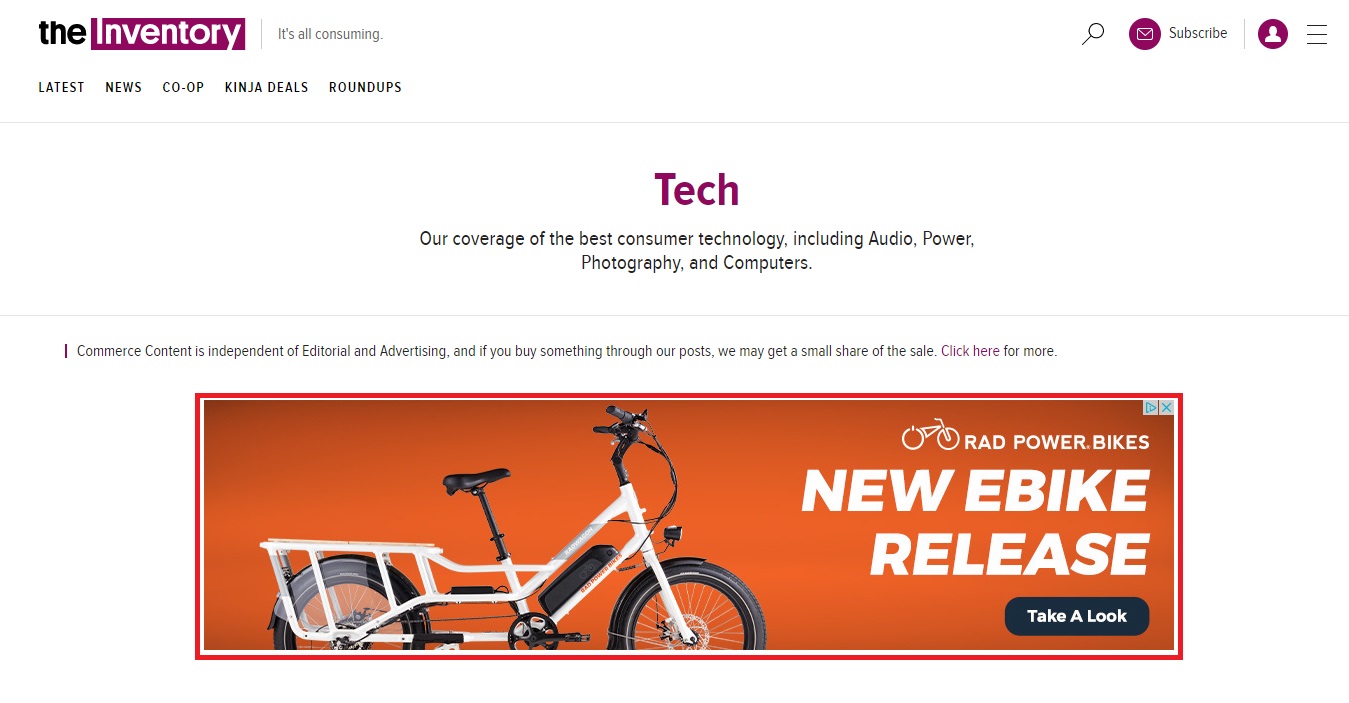 Rad Power Bikes promotes the release of its new e-bike with a sleek banner ad through the Google Display Network.

Firstly, the ad campaign’s targeting is spot on. It targets tech and gadget sites to reach young professionals likely to be interested in a new groundbreaking e-bike.

The ad highlights the product itself against an eye-grabbing orange background. The copy is straight to the point and large and easy to read.

The CTA of “take a look” is a bit weak, but the visuals make it work. 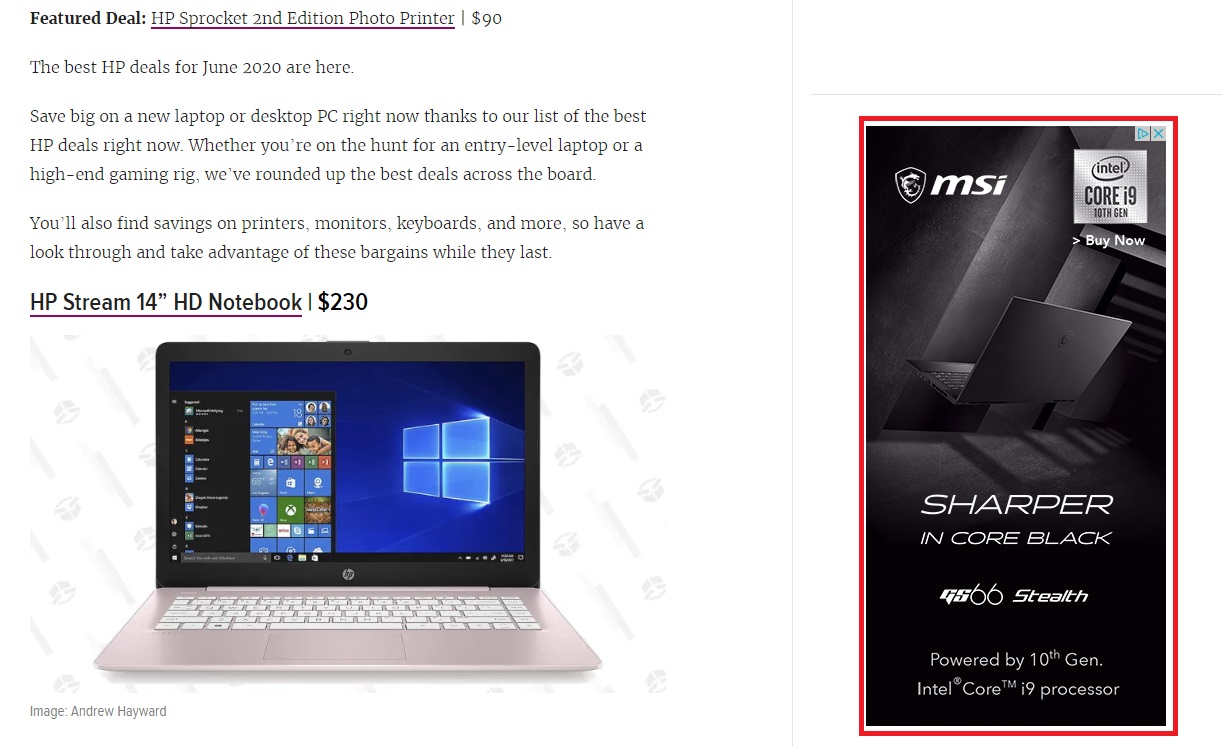 The first thing you should pay attention to is the ad campaign’s targeting. The ad shows up in the middle of an article about laptops from a competitor.

It doesn’t get much better than that.

The visuals are also on point. The entire banner is as sleek as MSI’s laptop — thin, futuristic fonts, and black and silver as the main color scheme.

Here we see a banner from Nanopay, promoting its liquidity management services in the Cloud Innovation top page on Forbes.

Again, targeting is the key to why this banner isn’t a waste of ad dollars. By using Google’s premier DoubleClick network, Nanopay can advertise to an audience of mostly high-level professionals.

The ad itself is simple, with clear and concise copy, and a straightforward CTA.

When the targeting is right, the banner doesn’t need to be complicated.

Here a Pearlfeet ad shows up in the Forbes search results for the term “shoes”.

The targeting is on point.

But more than that, the product itself is front and center. The banner ad perfectly shows a great looking pair of shoes both in use and by itself.

To top it off, it drives action with a 65% off sale as a unique CTA. 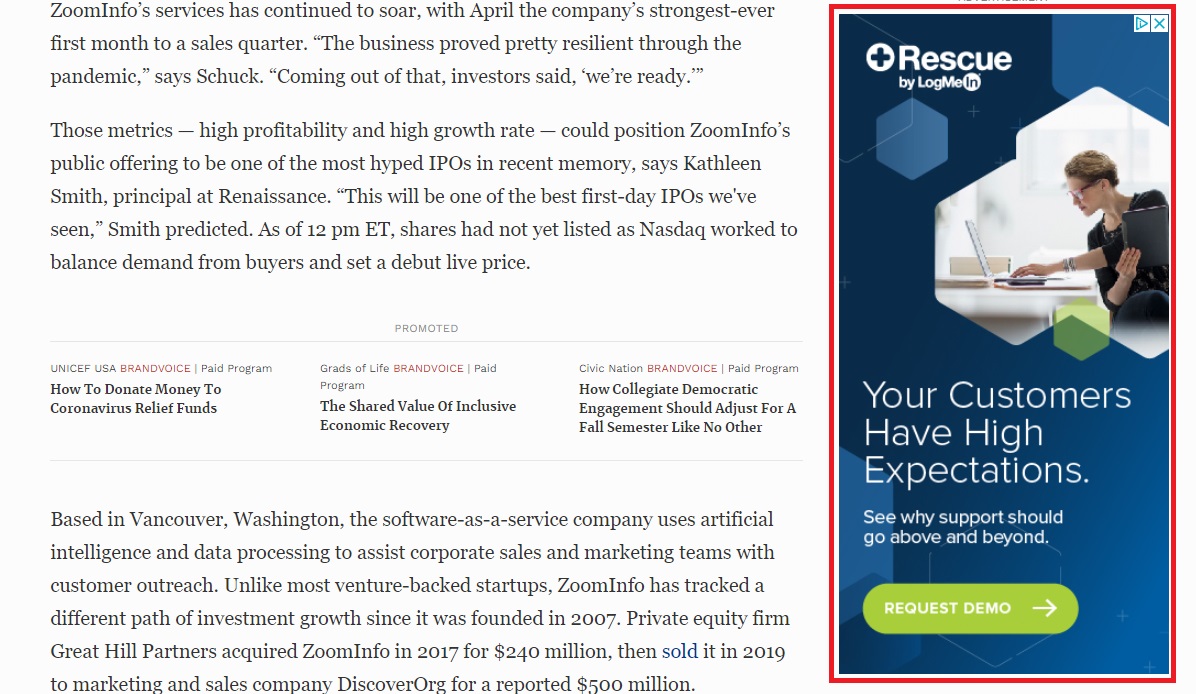 Instead of a bright red or orange to grab attention, it uses dark blues that communicate reliability and enterprise robustness.

The copy also focuses on the target customers and their problems, rather than simply tooting the company’s own horn. 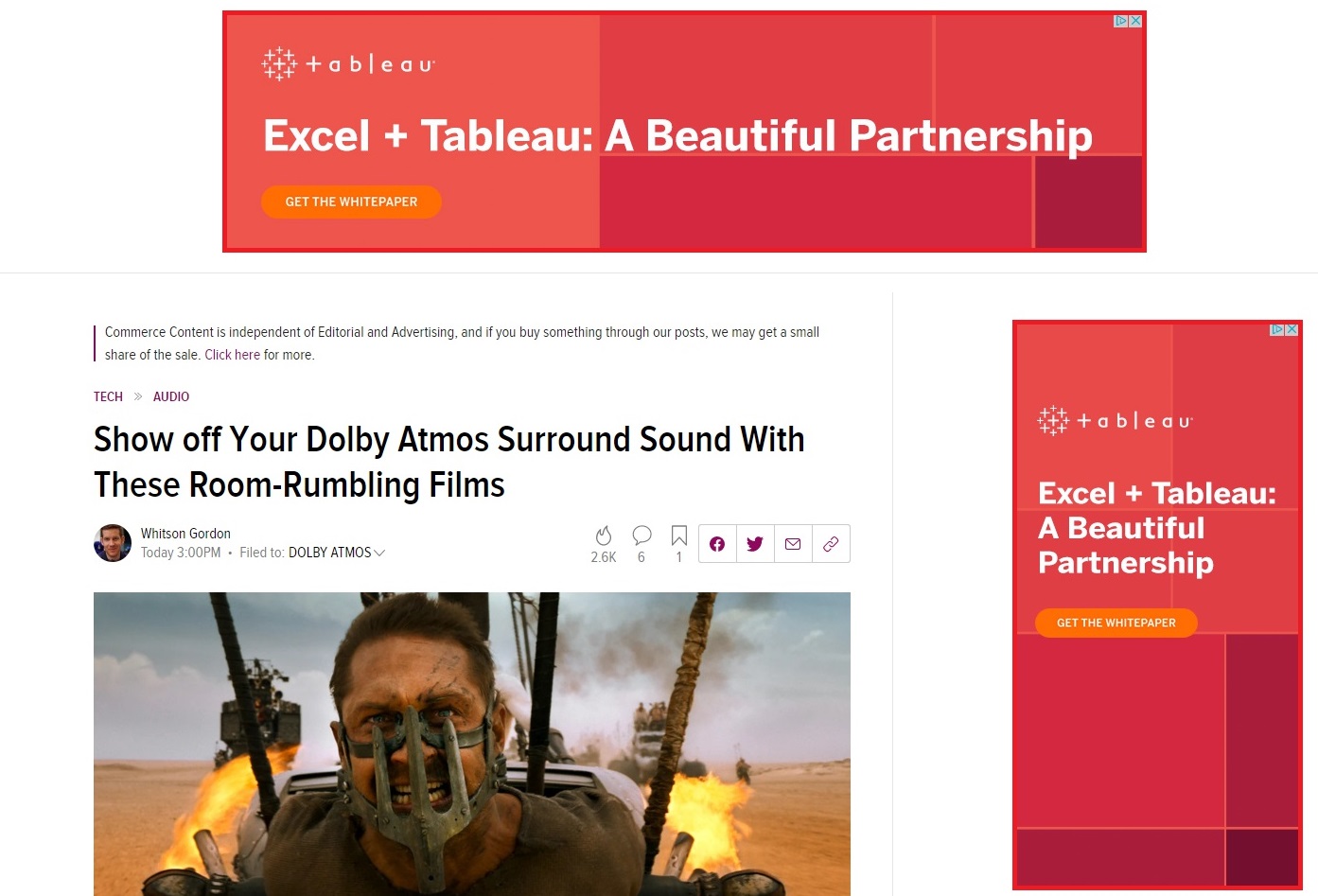 Tableau uses two banner ads to promote its white paper on how combining Excel data with Tableau’s analytics will give you better insights.

Tableau understands that most companies settle for using Excel to visualize their data. These banner ads promote a white paper supporting that their integration leads to more valuable, actionable information.

Not only that, but the banner ads aren’t randomly appearing for gadget-related content. They retarget previous visitors to a relevant page, in this case, me.

Here the Ridge grabs the center stage with a leaderboard ad in the Inventory’s tech section.

With a unique take on the classic before and after ad, the banner grabs the attention of the Ridge’s target audience.

The same ad introduces both the problem, an old clunky wallet that won’t fit in pockets, and the solution, The Ridge.

It also seems to target tech and gadget related websites, which is a perfect match. 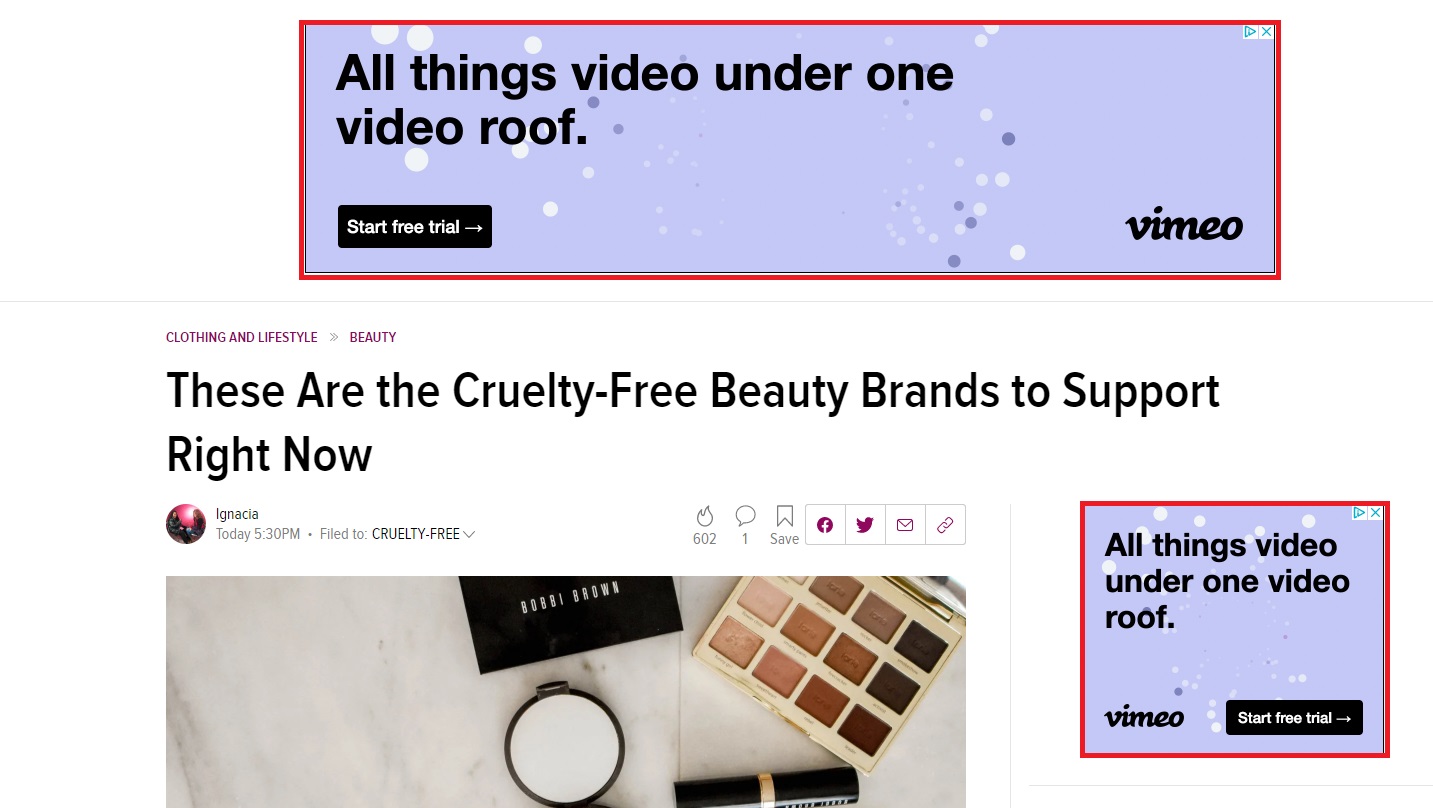 These purple banner ads from Vimeo pack more of a punch than it might seem at first glance.

Rather than screaming at you with color, they grab your attention with sleek animations and transitions.

The use of animation can help you overcome banner blindness and get noticed.

The copy and design are incredibly on-brand, not pushy, informative, and creative. It shows that Vimeo knows its audience, tech-literary creatives who are fed up with dynamic coupons and “special offers.”

This banner from Wikibuy takes a shot at Amazon and tries to win some eCommerce market share.

Cnet is a major publication for tech and gadgets, making the product example a perfect match.

It follows a simple copywriting principle of showing rather than telling.

The ad doesn’t say, “our AI price comparison algorithm will always find the best price.” It shows how a customer could save significantly by making the switch. 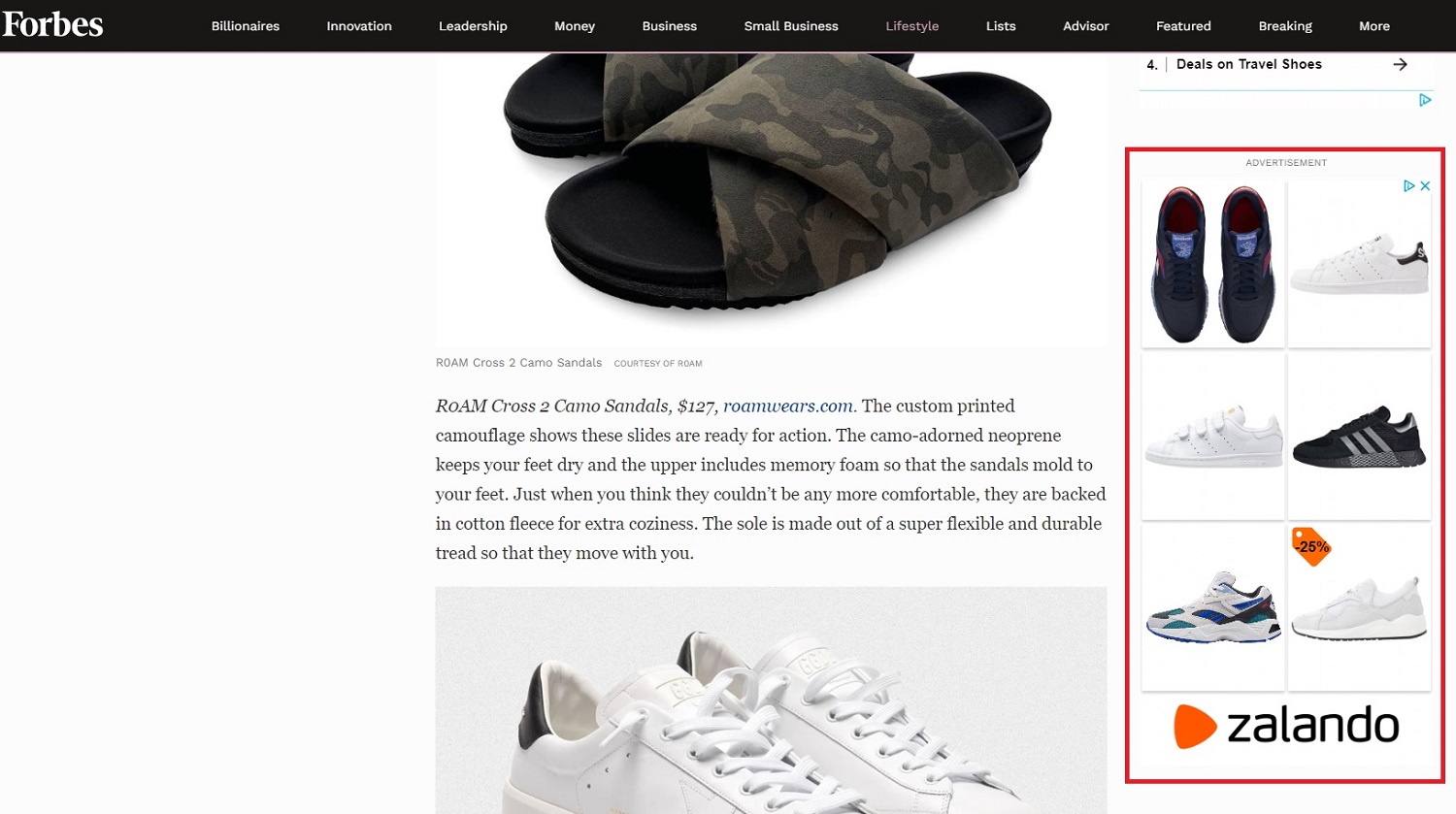 Here Zalando promotes a selection of comfortable shoes in a Forbes article about work-from-home shoes.

Rather than promoting a single pair of shoes, it highlights six different pairs in different shapes and sizes.

This helps appeal to a broader range of Zalando’s target market than a single shoe.

It also drives action with a 25% off coupon tag on one of the shoes. 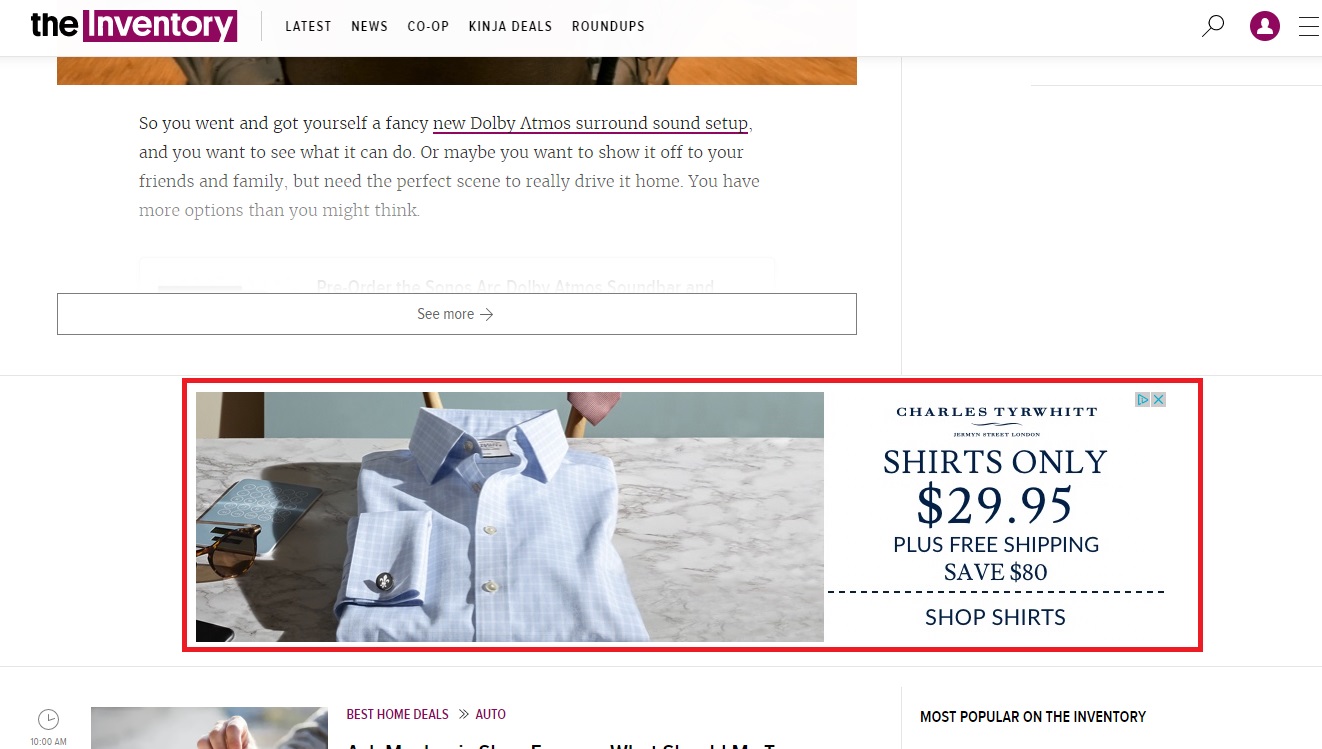 The Google display ad is designed to take the user back to a “classier time”. 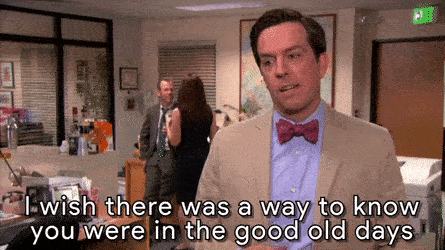 With a matte color palette and an old-school font, it sets the stage for the customer to want to time travel.

Luckily for them, this one-way trip is available for a cool $29.99.

It starts off by touching on a relevant, up-to-date development and business problem — the increase of remote working.

The second frame then swoops in with a promise to secure remote workers around the globe.

The image, a person shrouded in a blanket next to a pet cat, promotes a sense of security and calm. 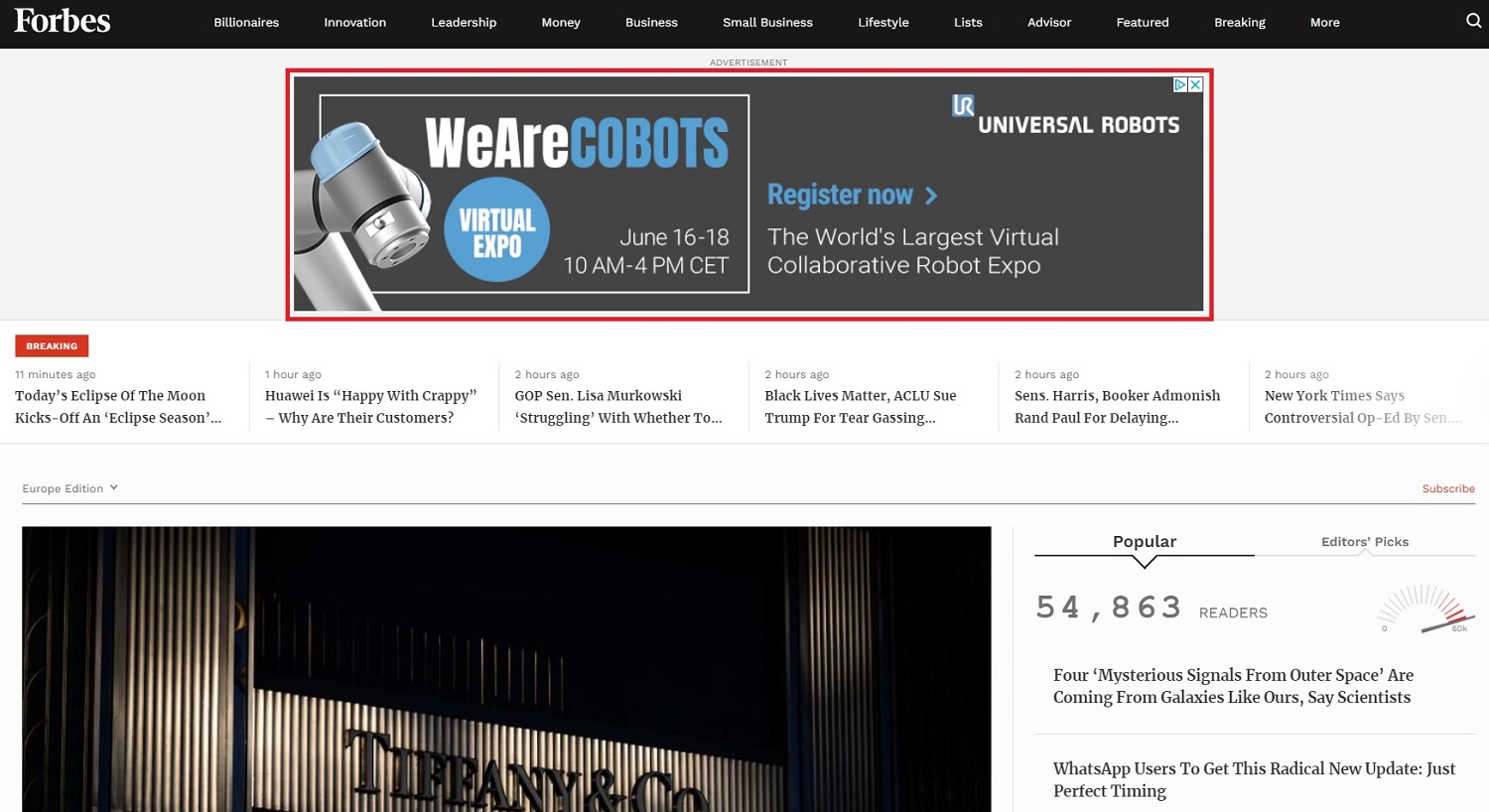 WeAreCobots is a virtual expo on collaborative robots, arranged by Universal Robots.

Instead of trying to promote a product directly with cold traffic from display ads, UR invites interested users to sign up for its virtual expo. 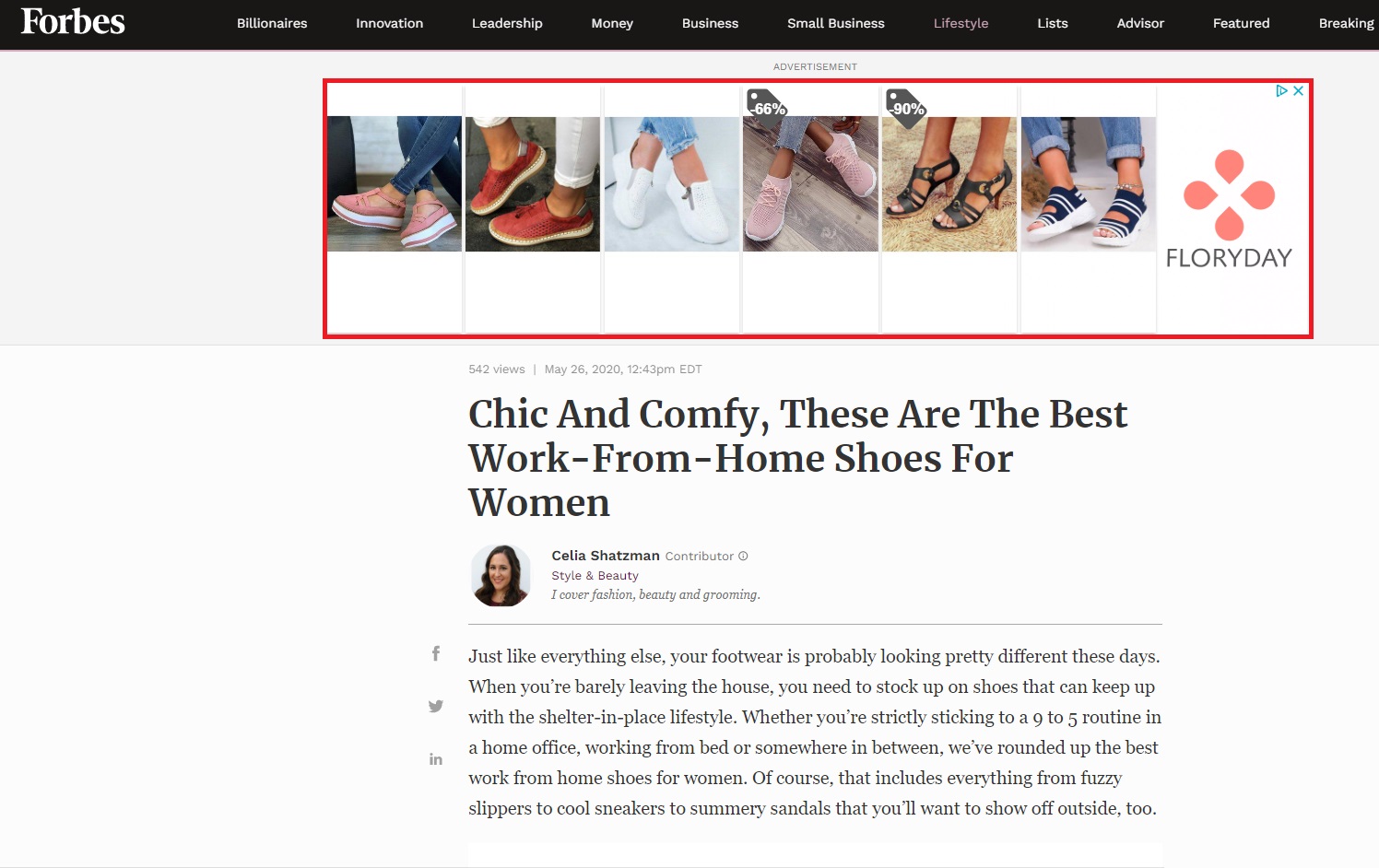 This leaderboard ad from Floryday promotes a selection of different shoes for women.

Floryday likely uses keyword-based targeting, or AI-powered responsive ads, to match the products to the article content. Five out of six pairs definitely fit the bill of chic and comfy. 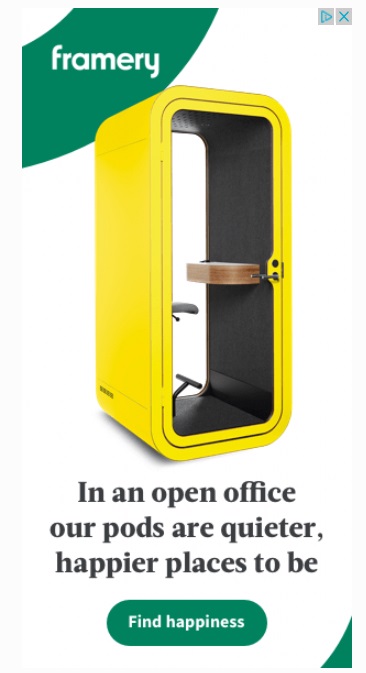 It uses the product front and center, in a unique color to grab attention. (Do you really think most office booths are yellow? The standard color is white.)

The copy indirectly points out the problems of open offices and suggests Framery pods as the solution.

The CTA “Find Happiness” is a nice creative touch; completing the loop opened by the main copy. 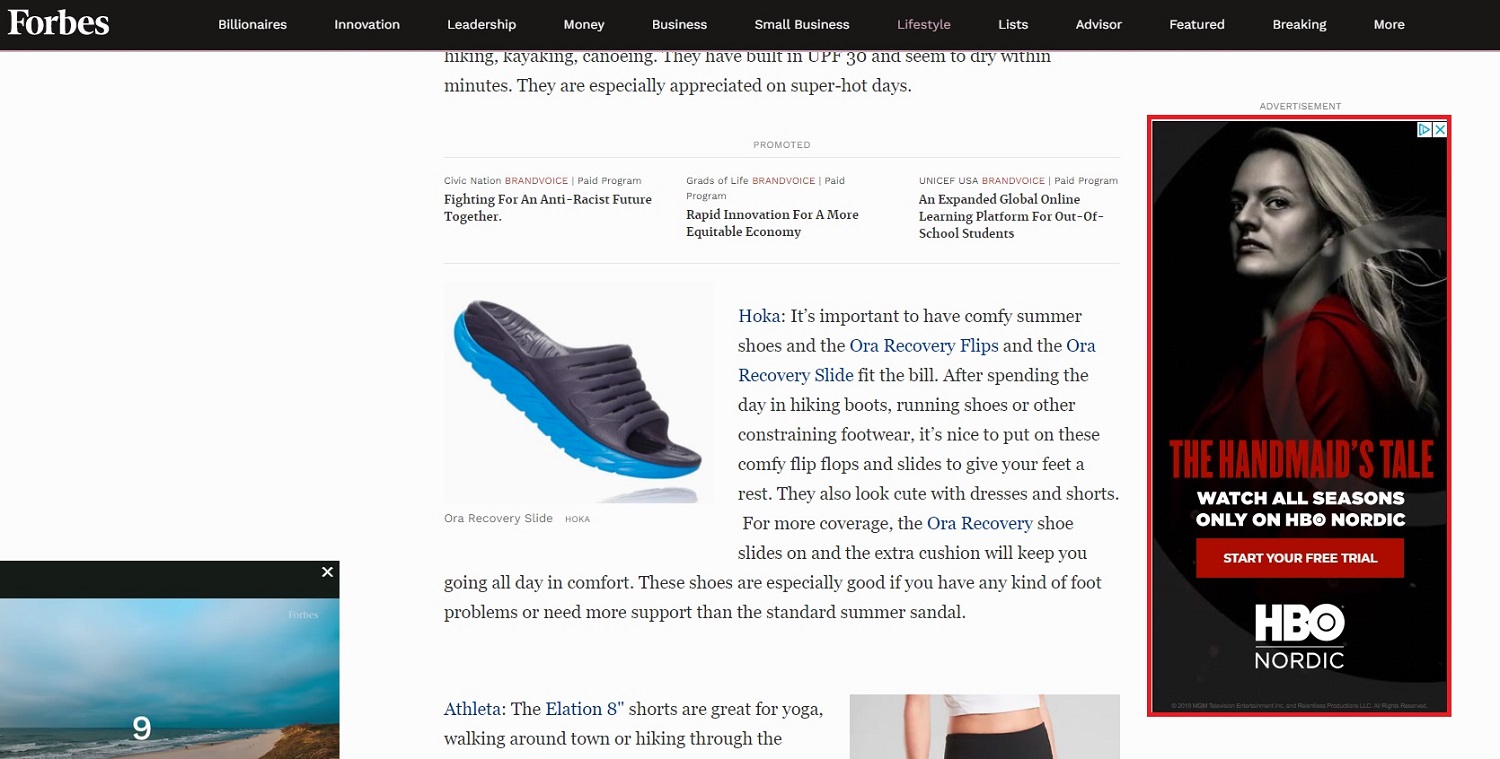 The banner ad’s color palette and fonts perfectly convey the feel of the show, just like a movie poster.

The black and red also stands out and grabs attention on white backgrounds, which the majority of websites have. 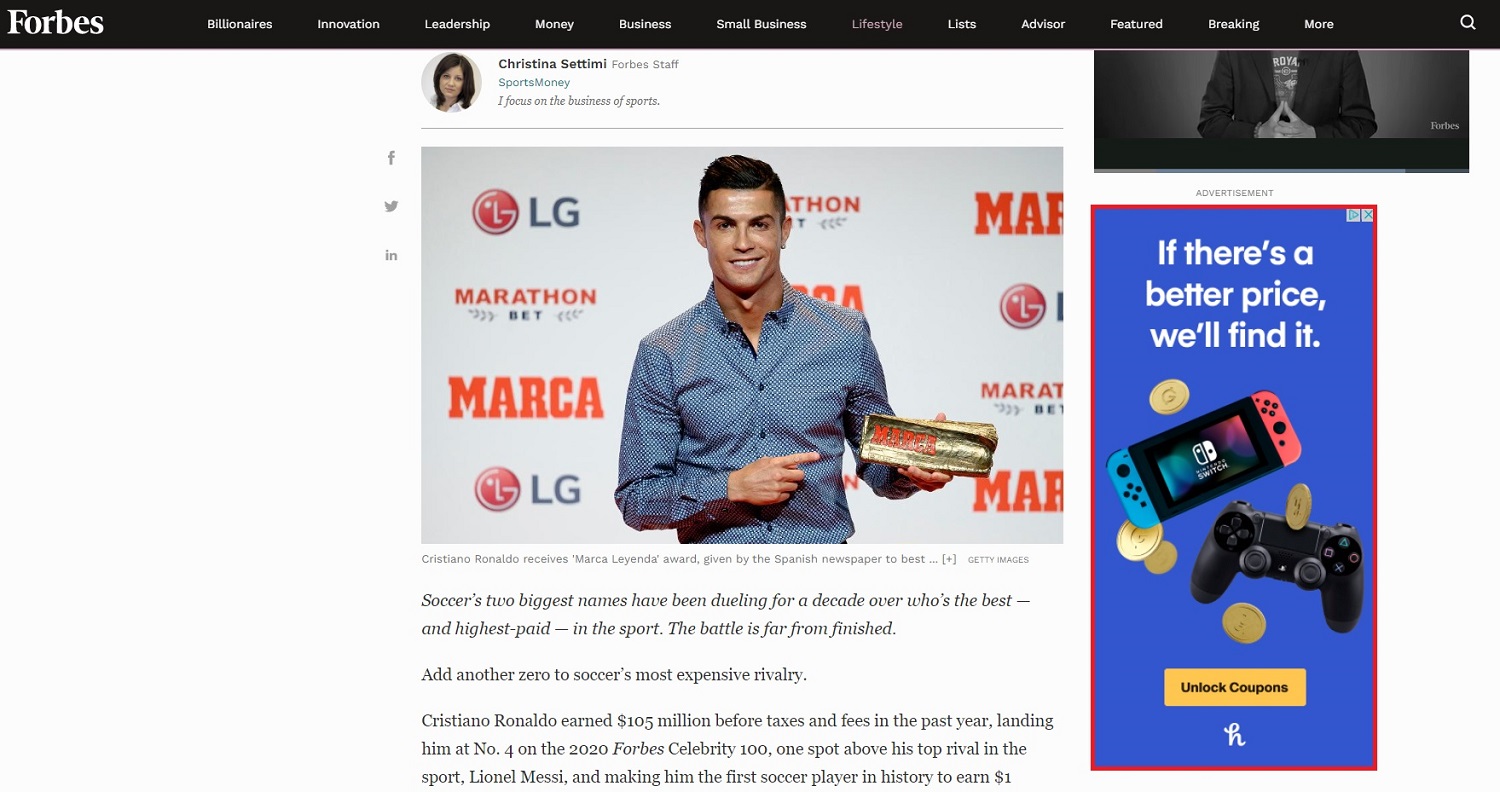 This banner from Honey promotes its automatic coupon finder in a single sentence.

It is the perfect example of KISS (Keep It Simple, Stupid.)

What do online shoppers care about when they are making a purchase? Getting the best deal possible.

With some basic product images, a few digital coins, and one sentence of copy, the ad makes a promise to Honey’s target customers.

If there’s a better price, Honey will find it. 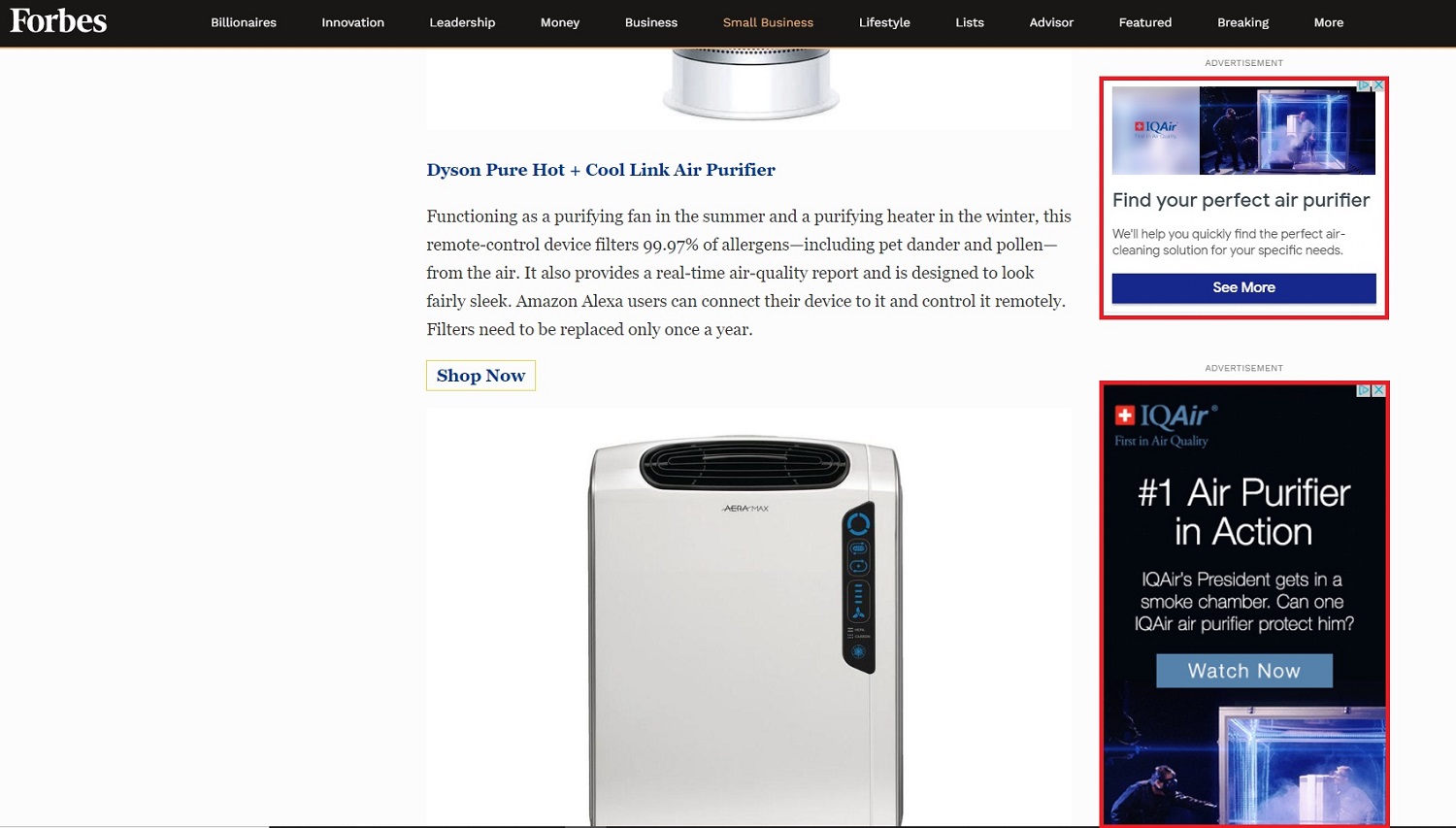 Who do you want to show your banner ads to?

Someone who’s ready to buy a product like yours, right?

These IQAir banners show up in an article about “the best air purifiers,” making sure potential customers consider them too.

Talk about perfect placement. You can replicate this with keyword targeting in your Google Ads campaigns.

Here we have a simple banner ad from Squarespace in a large leaderboard format.

In a colorful online magazine like Time, the monochrome ad stands out with a jet black background.

A great example of contextual advertising.

The copy mentions Squarespace’s “award-winning” designs, a classic use of social proof — saying, it’s not just us that think we’re good.

It highlights the main selling point of the phone, which is its 50x, incredible camera, and unique screen.

It drives action with a special offer of £30 off and over £235 worth in gifts.

It also promotes brand recognition by showcasing the phone’s profile from different angles.

Here we have a banner ad from GQ in an article from its sister magazine Wired (owned by the same publisher).

GQ’s Best Stuff box includes over $200 in electronics, accessories, and grooming products, just the thing to interest a reader of the Wired gear section.

It’s a great example of effective co-promotion between partner companies.

What Should Be Included In a Banner Ad?

If you want a banner to drive targeted traffic that will convert, you need to include the following elements:

If your product looks great, perfect. If not, show it in use in a visually appealing setting.

Honey’s “If there’s a better price, we’ll find it” slogan is a good example.)

Don’t be afraid of something simple like “Start Your Free Trial.”

Banner ads are the perfect way to build brand awareness on a budget.

The Ridge’s leaderboard ad is a great banner example to follow.

The main graphic is an eye-catching comparison between an old-fashioned wallet and the Ridge. It’s further enhanced by the concise but clear copy “Old Wallet, New Wallet.”

The simple “Shop Now” CTA spurs interested consumers to action, and of course, the metallic greys are part of Ridge’s core brand colors.

Banner ads are very much alive and well in 2020, as you can see from the examples above.

If you want to replicate their success for your own campaigns, you need to mix and match the best elements you can find in each.

For example, taking inspiration from the strong visual in the Rad Power Bikes banner and learning from Honey’s copy.

Digital marketing is constantly evolving, and banner ads are no different. To keep a high-performing campaign running, you need to keep learning.