You are here: Home / Blog / The 15 Best Hashtag Campaigns of All Time

Hashtag campaigns can do a lot for your business. They can build brand awareness and brand recognition.

They can even shape your brand and encourage the creation of user generated content.

Since hashtags dominate on Instagram and Twitter, these are significant advantages that we can’t afford to overlook. 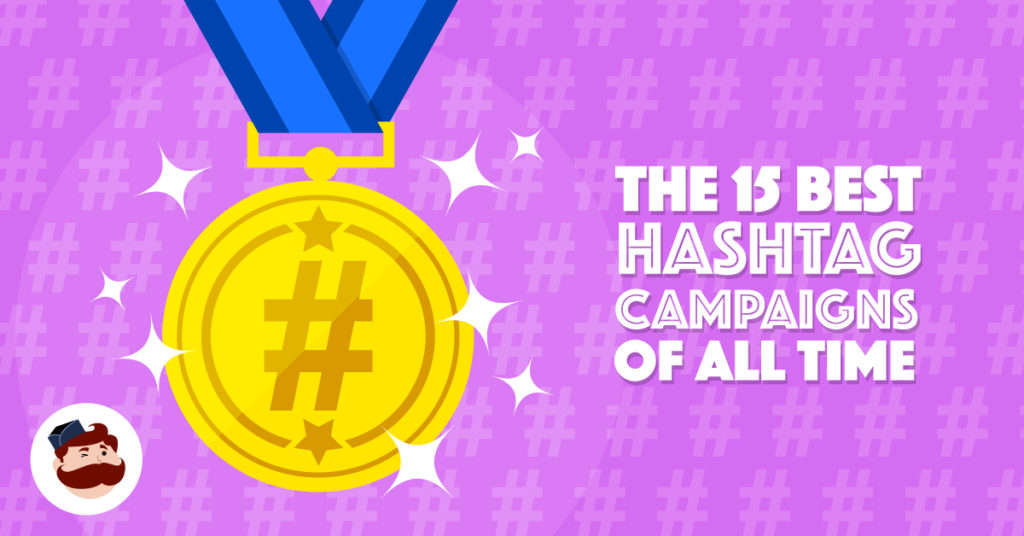 Creating branded hashtags can be difficult, and it can be even more challenging to incorporate a hashtag into a long-standing successful campaign.

How could we start this list with anything else? Coca-Cola’s #ShareACoke campaign is one of the most brilliant hashtag campaigns we’ve seen.

The idea behind the hashtag—cokes with names and titles on them—drove massive numbers of sales, and generated a ton of user-generated content on social media. People were snapping Instagram shots of bottles with their friends’ names; I even saw not one, but two pregnancy announcements where the first-time parents had “Mom” and “Dad” cokes in their announcement on Facebook. 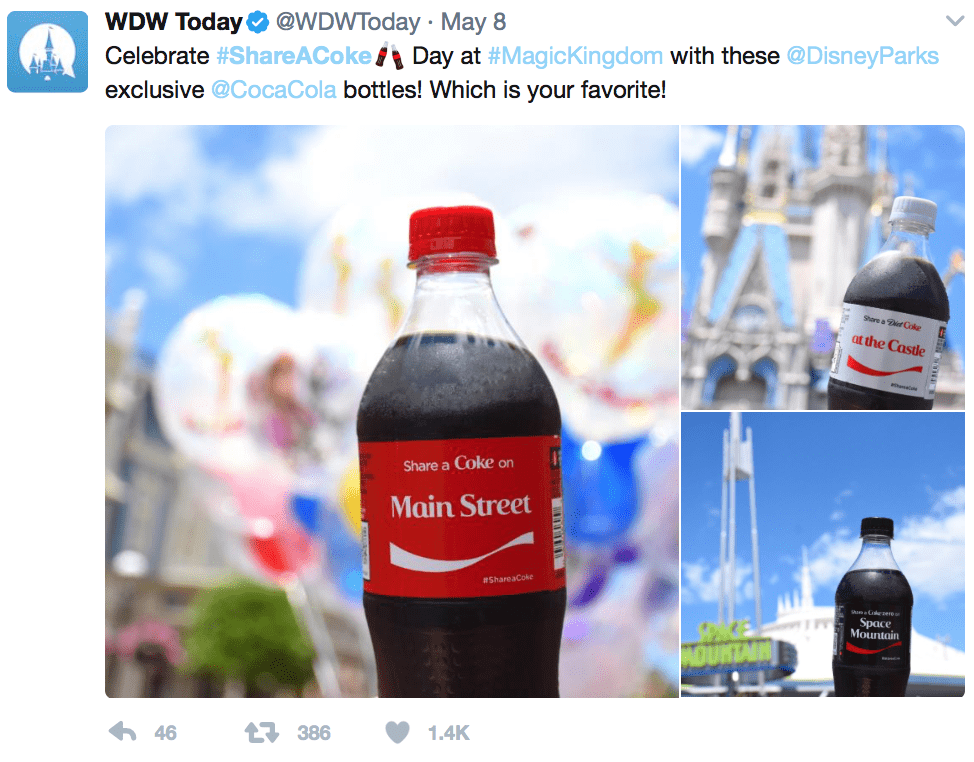 The #ShareACoke campaign worked so well because it incorporated both personalization on a mass scale (without actually being personal at all) and a community feel all at once; “share” is in the name after all. 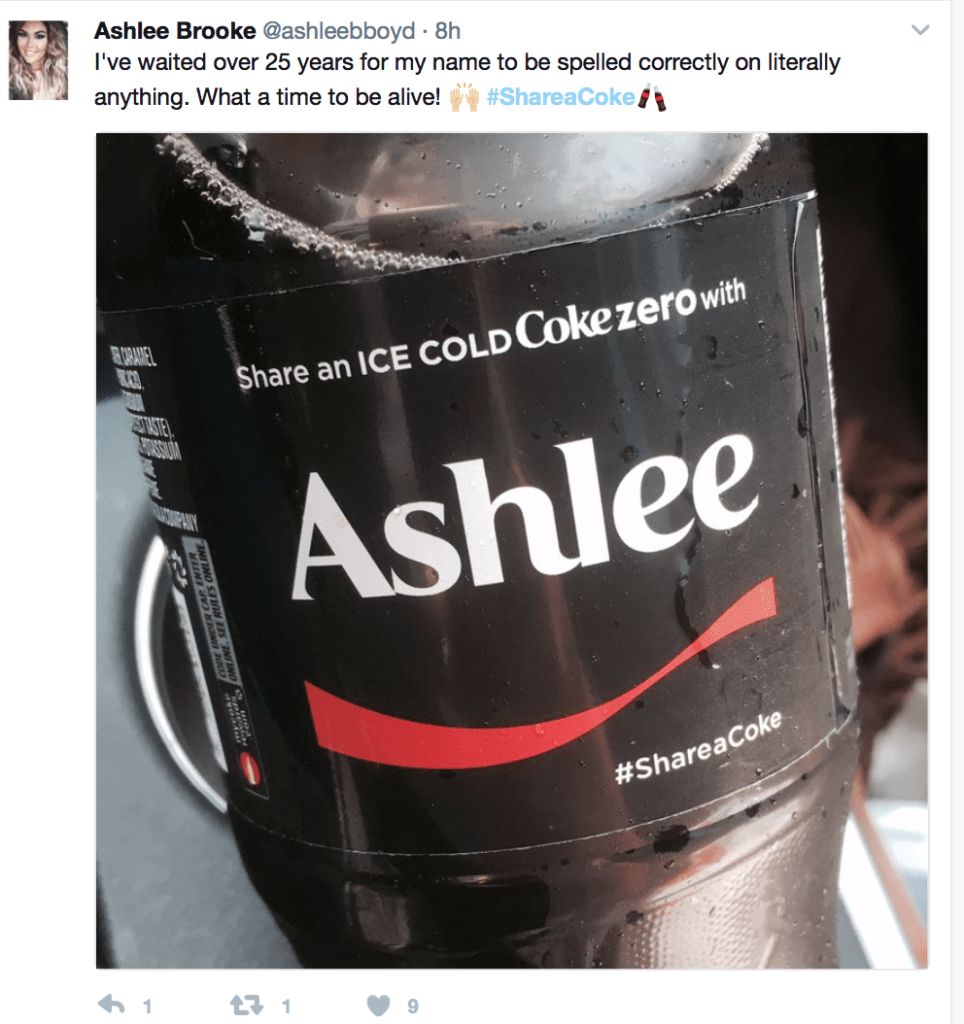 Coke kept their momentum from this campaign up; it’s still running, and I don’t see it going away anytime soon.

Brands that support causes or beliefs that its customers also believe in, can get a huge perk in loyalty. Always’ #LikeAGirl campaign is a great example of that.

They took the term “like a girl” away from its original meaning of being weak and, by showing young girls who were uninfluenced by society’s expectations, turned it into a hashtag of strength.

The #IceBucketChallenge campaign did two things in droves. It raised awareness about ALS, and it raised a ton of money for the ALS Association (even though they didn’t actually start the hashtag).

This is still a great example of how nonprofits can create fun, engaging hashtag campaigns to raise funds and awareness. 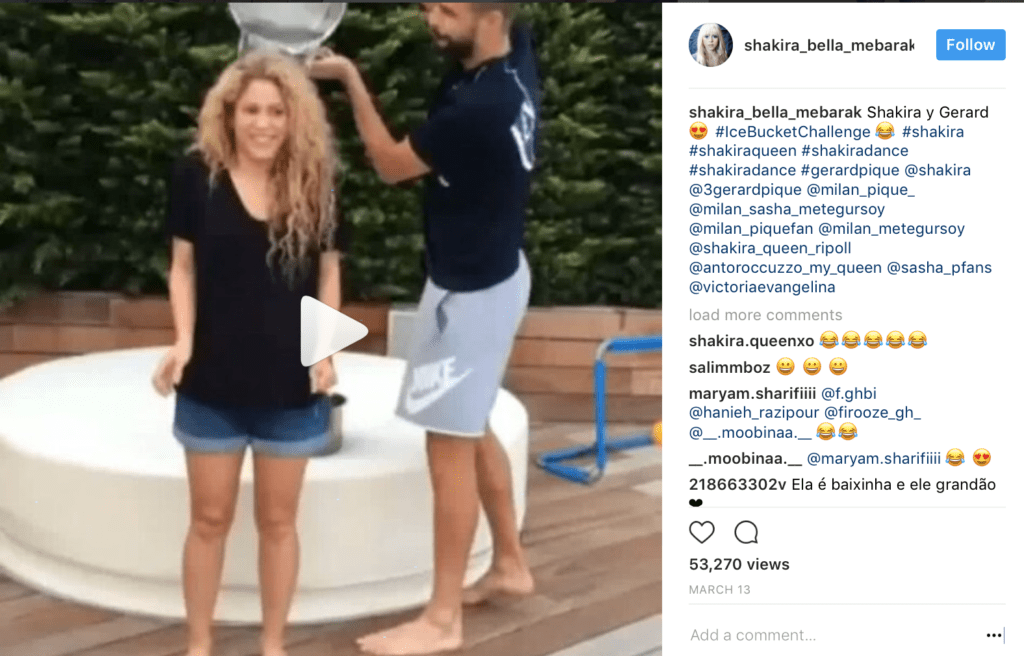 Celebrities got in on the challenge, but the insistence to “tag your friends” helped it go viral and get the kind of results it did.

🛑 Spoiler alert here for anyone who hasn’t seen Lord of the Rings and/or Game of Thrones (even though that’s on you at this point)! 🛑

Sean Bean is known for appearing in cult classics but dying almost instantly. When he was slated to appear in TNT’s show Legends, TNT used the hashtag #DontKillSeanBean to promote the show. 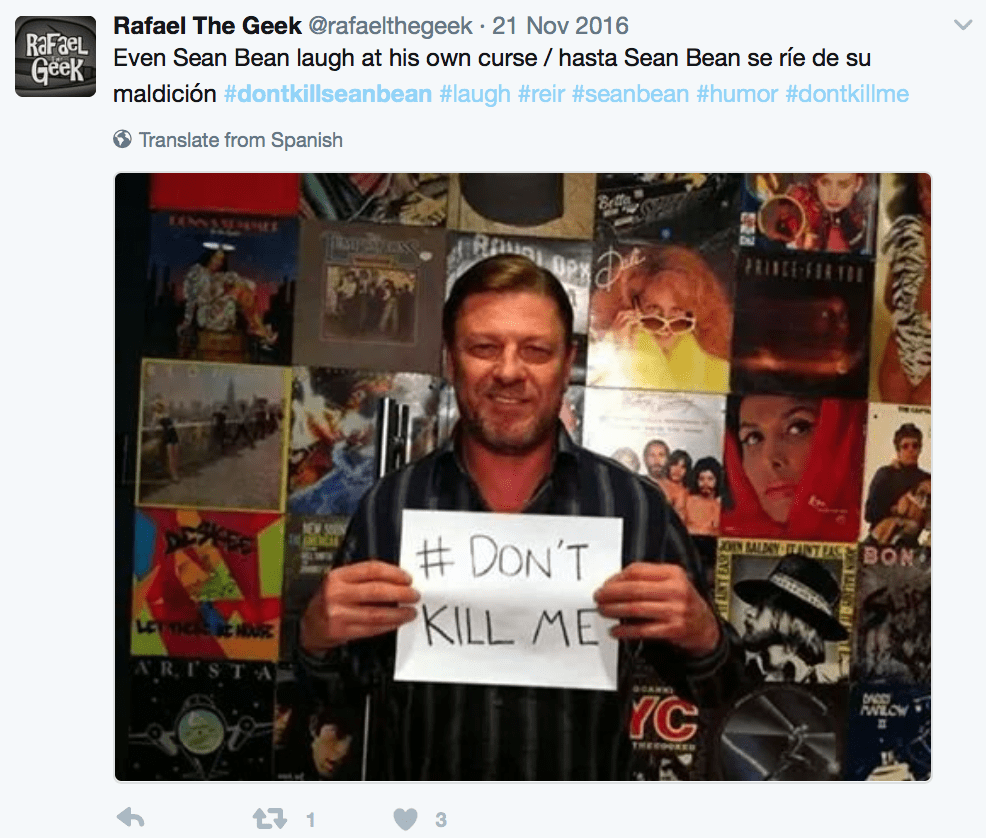 It was a great way to utilize influencer marketing, even though Bean himself isn’t active on Twitter. It also grabbed a ton of his loyal fans (thanks to the loyal fandoms of his work, he has many) and garnered plenty of engagement on social media. 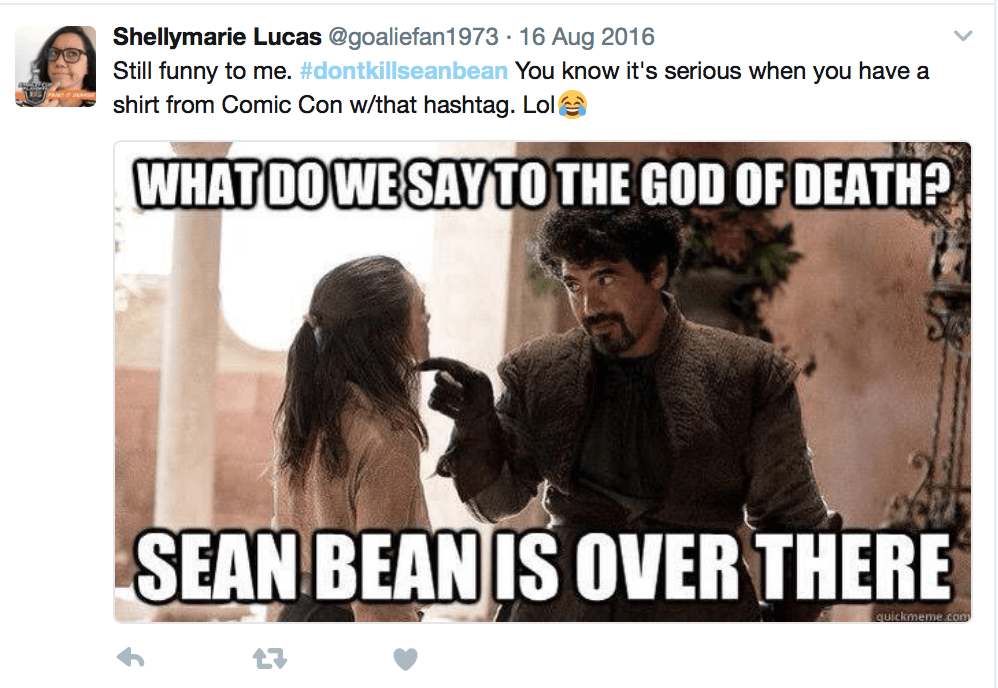 I love RedBull’s marketing, and I really love puns.

RedBull’s 2015 #PutACanOnIt campaign went viral almost instantly, sparking a ton of UGC. The reason why it worked is simple: it was fun, and it allowed users to be creative.

It actually inspired so much UGC that it got RedBull a ton of attention at absolutely no cost; users were doing all the work for them.

All they had to do was share some of the very best content that users created, which they could find by searching for their hashtag.

Your hashtag can be creative, or it can be direct and to the point; either is fine. Esurance’s #EsuranceSave30 is a great example of this.

The premise of their advertising is that customers can save 30% with them. After their related Super Bowl ad ran (with their hashtag in the bottom corner of the screen), they ran a Twitter sweepstakes with “all the money they saved.” 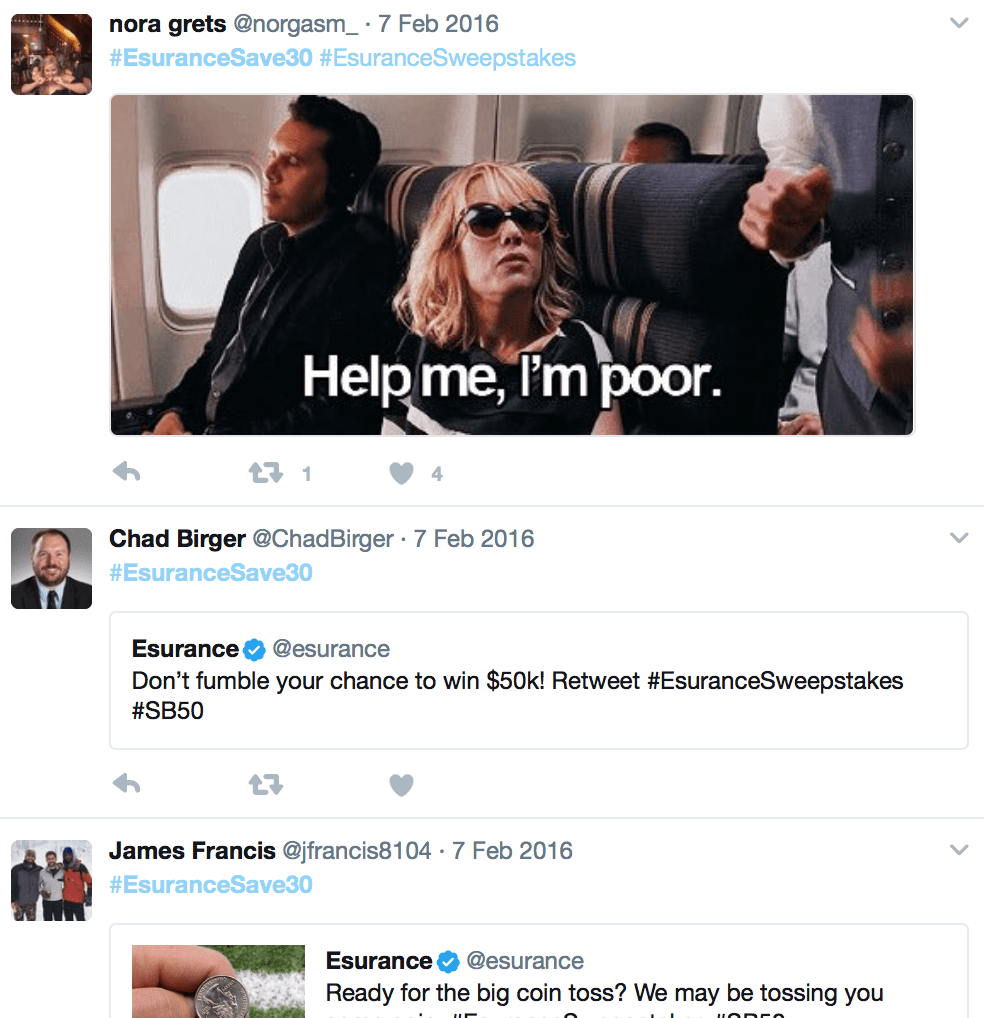 Nest’s security camera system can feel a little uncomfortable for a lot of people; who actually wants to be watched all the time?

To counteract some of the creepiness and showcase the human side of their brand, they used the hashtag #CaughtOnDropCam to encourage users to share hilarious videos. 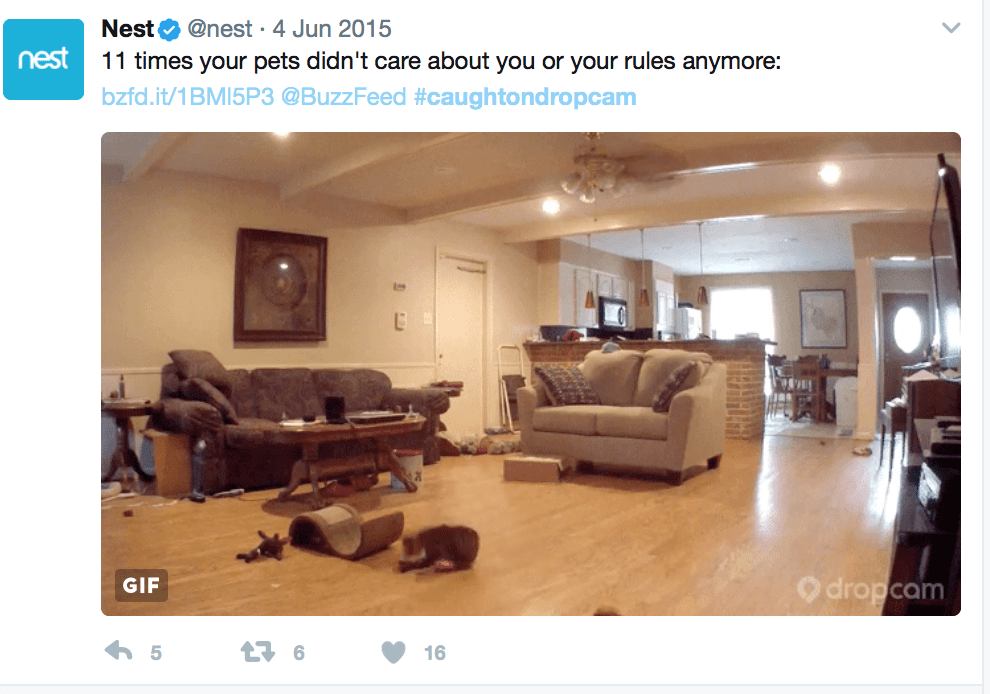 They got everything from hysterical family moments to animals gone wild.

And they got new customers too, of course!

Some businesses fall into industries that aren’t as exciting or engaging as others, and have it harder when it comes to user engagement.

You’d think “toilet paper” would be one of those industries, but Charmin has beaten the odds with their genius #TweetFromTheSeat. (They’ve also hit jackpot with their annual toilet paper dress contest, but that’s another story for another post).

The premise of this hashtag is simple; you’re theoretically supposed to tweet while on the toilet seat.

While the premise seems pretty ridiculous when spelled out, the campaign itself went viral on Twitter almost instantly. It was a fun and quirky campaign, and it had the catchy name that users couldn’t help but engage with.

Humor can go a long way on social media, and DiGiorno’s has run several hilarious hashtag campaigns to great success. This includes their #DigiorNoYouDidn’t campaign, which was designed to remind users that DiGiorno’s was always the better choice.

The hashtag was catchy, and users quickly embraced it as lingo on Twitter. 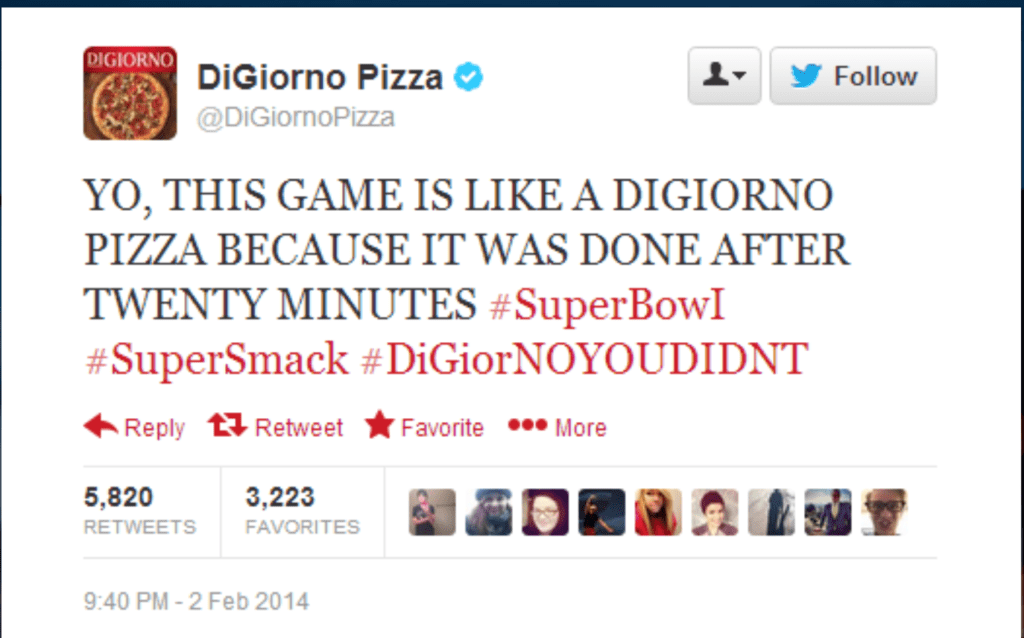 Plenty of brands use giveaways or contests to encourage users to create UGC. What was so crazy about Calvin Klein’s #MyCalvins is that they got a ton of engagement without offering anything in return.

They asked users to share pictures of themselves in their Calvin Klein undergarments, and got a shocking amount of content on Instagram in return—especially considering there was no real incentive to do so. 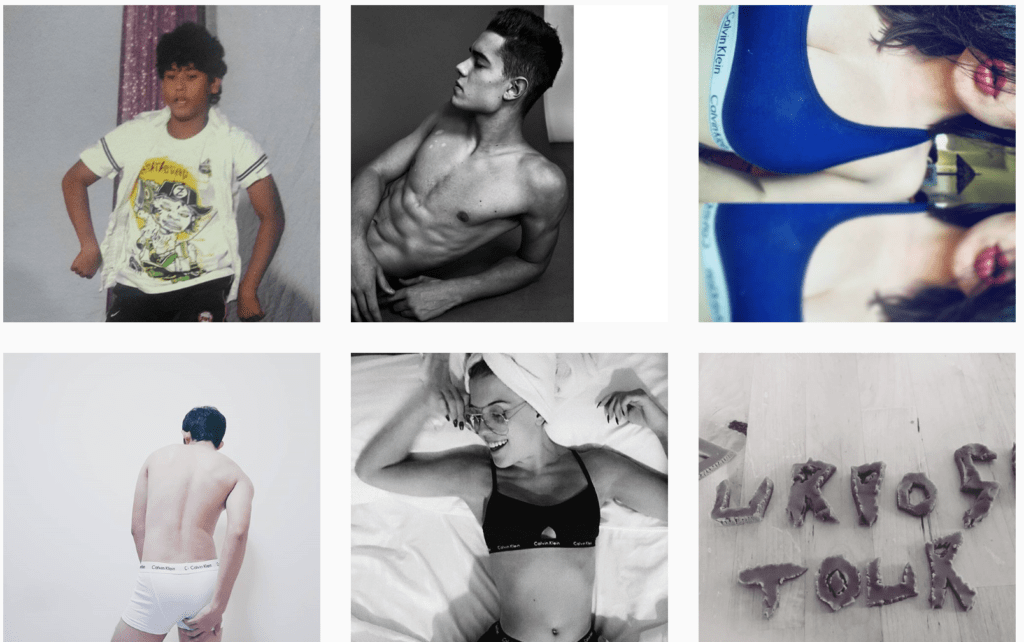 What wasn’t surprising was the enormous surge of new followers they got during the campaign as a result.

One of the biggest benefits of working from home is the fact that I get to spend most of the day with my dogs. Purina wants to make that reality for their employees, even though they hold traditional in-office jobs, and they’re promoting that perk with their #PetsAtWork hashtag campaign; apparently, people who work near their pets accumulate less stress during the day.

By emphasizing how much they care about pets and pet owners, they’re humanizing their brand. 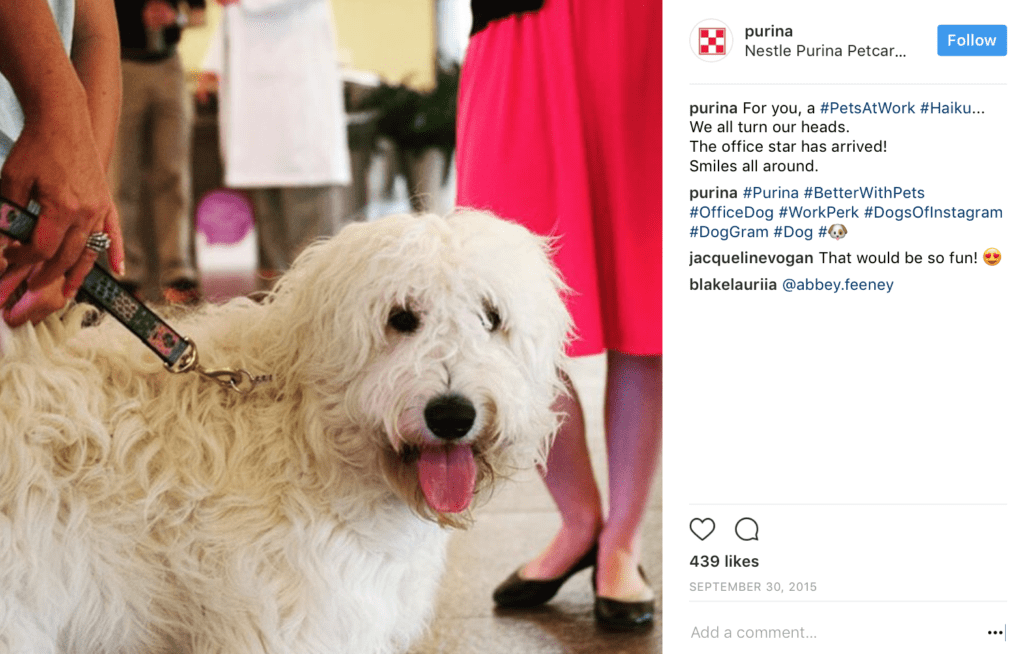 The smartest part of this campaign? Who doesn’t love sharing adorable pictures of their pets? They got a ton of engagement and plenty of UGC in no time at all.

Here’s the thing with this one: KFC didn’t actually start this hashtag, and it had nothing to do with their brand.

They saw the topic trending, though, and jumped in. This was a great idea; it’s a great way to channel a relevant trending topic and harness some of that engagement for your brand.

They offered a promotion, and used the topic to get in front of a very hungry audience who couldn’t stop thinking about fried chicken.

Even though it was short-lived, it was a win-win for everyone involved.

I know, another pizza place. Sorry. They just have great marketing teams!

This campaign went all the way back to 2012, and for every person who retweeted #LetsDoLunch, the cost of the pizza would go down for that day until 3PM.

This helped to create a community around the brand, with people rallying for everyone to participate to get the cheapest pizza ever.

85,000 tweets later (in just one day), and I’d say they accomplished their mission.

Make-A-Wish’s #SFBatKid is a great example of a hashtag campaign nonprofits can follow. 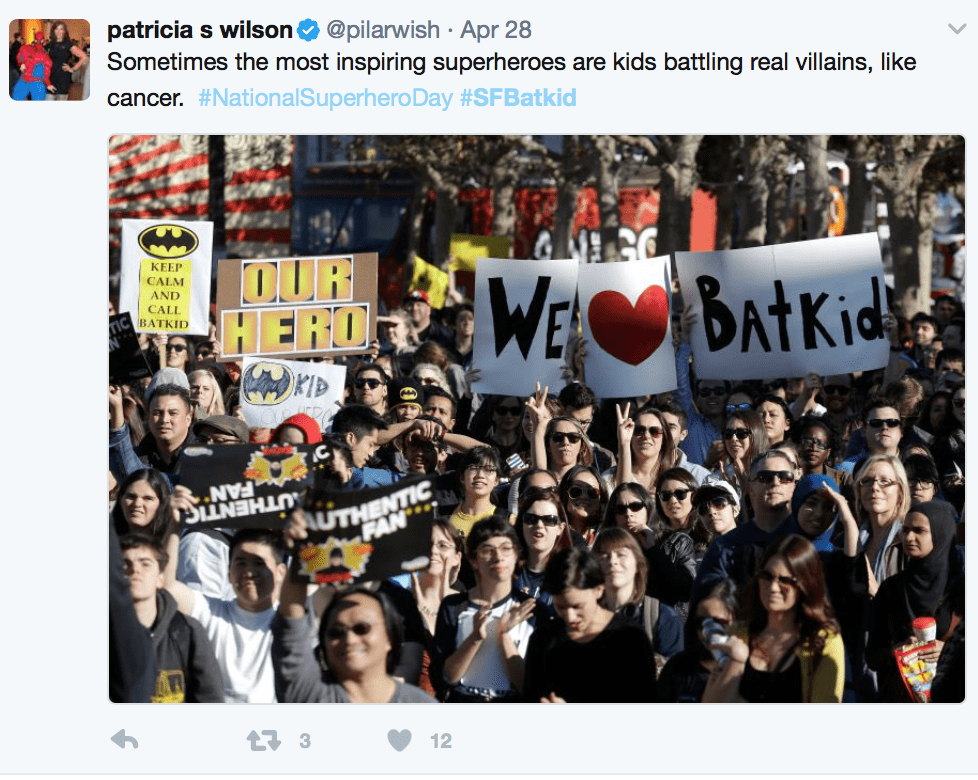 Make-A-Wish planned for this to go viral; they had the hashtag ready to go, and had several people on-hand to engage with activity related to the hashtag as the event happened.

They ended up with 1.7 billion impressions on the hashtag, along with engagement from former Batmans Christian Bale and Ben Affleck.

#TBT is a hashtag that’s already used on a weekly basis, so Expedia’s #ThrowMeBack fit right in.

They used an existing trend and tweaked it to suit their brand; because of this, it was easy to get followers on board.

Instead of using #TBT, Expedia just asked users to use the hashtag #ThrowMeBack for a chance to win a vacation.

They adopted a hashtag users were already creating posts for, and channeled the momentum for themselves.

The hashtag campaigns on this list have several things in common:

No matter what size your business is, you can create a hashtag campaign that has all of these characteristics.

By using your hashtag frequently and authentically, you’ll be able to increase brand awareness and familiarity. Eventually, users will start using the hashtag to create UGC, giving it a life of its own.