You are here: Home / Blog / Facebook Video Thumbnail: Is it Essential for the Success of Your Ads? (a $1,000 Experiment)

At AdEspresso our mantra is “test everything,” and as we heavily use Facebook video ads, we’re always looking for different ways to maximize their performance.

Recently we tested what Facebook video ad format works best and also how video performance varies by platform. But that was not enough to slake our unquenchable thirst for knowledge (and for “scientific” data that help you maximize your digital marketing and ROAS).

So we turned our attention to one little detail that many marketers neglect: the Facebook video thumbnail, that custom image or frame from your video advert that viewers see first. 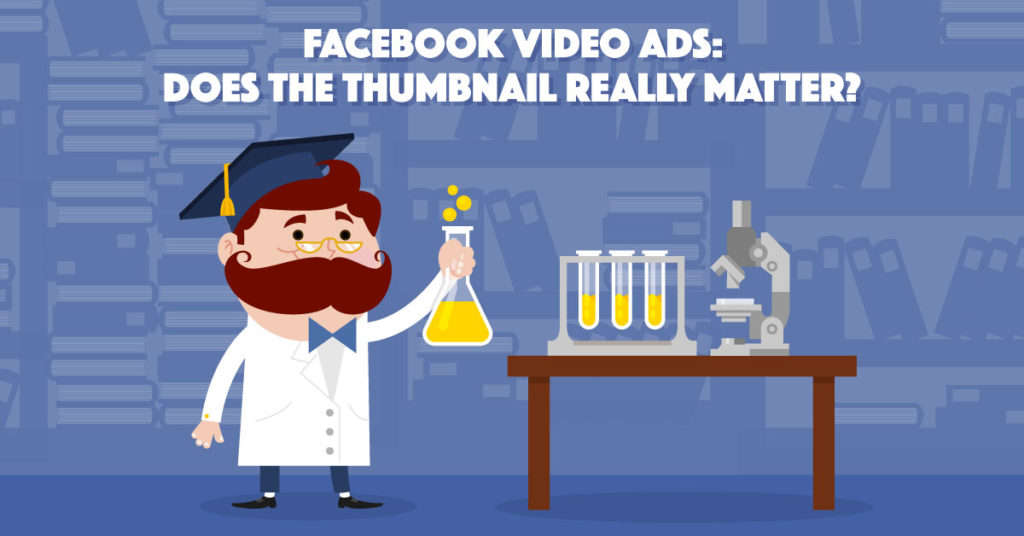 As we’ve seen working with thousands of customers, more often than not marketers willy-nilly take one frame from the video and use it as their Facebook video ad thumbnail.

Your Facebook Video thumbnail is especially important when users have autoplay turned off for Facebook videos, and picking the wrong image could seriously jeopardize the outcome of your Facebook video ad campaigns.

We’re huge fans of Wistia and have used their platform to host videos for years, so their new One, Ten One Hundred video series immediately got our attention.

Never heard about it?

Wistia challenged Sandwich Video to make three video adverts for their Soapbox app (a Chrome extension that enables anyone to record, edit, share, and measure presentation videos) at three very different price points — one for $1,000, one for $10,000, and one for $100,000. (If you’d like to see how the ads were made, check out the behind the scenes documentary series.)

Once the videos had been produced, Wistia embarked on a $60,000 series of tests to find out which version performed best across Youtube and Facebook for Soapbox app installs.

They tested direct response, carousel and sequential ads. (You can read about the experiment setup and download the results here).

One thing that wasn’t tested was the thumbnail image used for each video.

As Wistia launched their own Thumbnail Editor late last year, this was the perfect opportunity to run an experiment to see how essential thumbnails are for Facebook ads performance.

For this campaign we selected the video that had performed best in previous rounds of testing, which was the $10,000 version:

Everything else about the ads and adsets was kept the same to eliminate as many variables as possible.

Our aim when testing is to try distinctly different ads so that the results should be significantly different.

In this case, we used a photo of Adam, the founder of Sandwich video and star of the advert and tested it against a cartoon style graphic.

For each graphic, we then used versions with and without text.

Here’s how one of the ads looked, the headline, ad text and call to action button were kept the same in all versions: 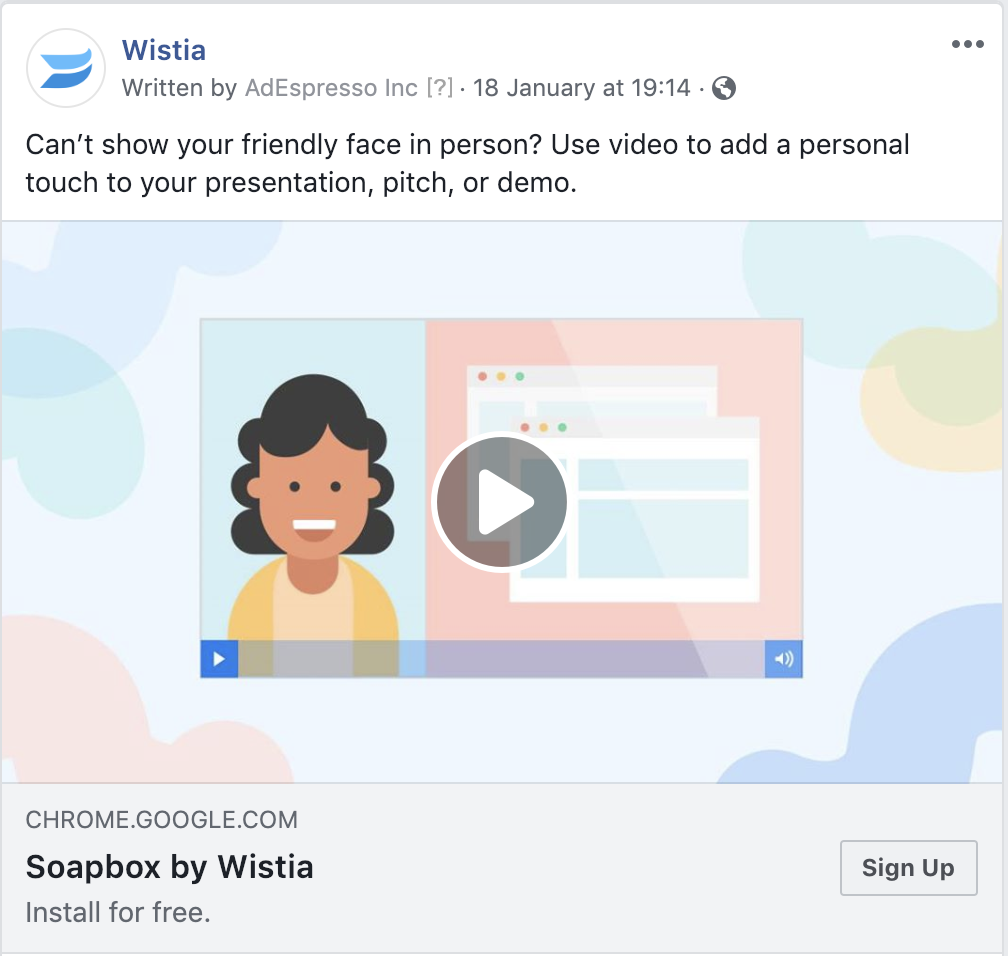 Our goal was to get installs of the Soapbox extension for Google Chrome (desktop version only).

Users were taken to the Chrome web store and then after installation were redirected to a Soapbox landing page where a custom conversion based on Wistia’s Facebook pixel was fired.

Scripting was used so that the pixel only fired on the first visit by each user, this way we could eliminate results being skewed by repeat visits.

To be clear, this was set up as a standard conversion campaign as we were measuring the pixel fires, rather than using an app install campaign.

Facebook desktop newsfeed only. Previous testing had shown poor results on mobile, as would be expected when the aim is to generate installs of an extension for a desktop only browser.

The campaign was optimized for conversions.

One ad per adset. This allowed us to precisely control the budget for each ad. Although this causes an audience overlap it shouldn’t be a problem given the audience size in relation to the budget.

A 1% lookalike audience based on previous Soapbox installers, United States only aged 21+. This gave an audience size of approximately 1.6 million people.

Therefore, we know that the video creative has a large impact on the CPA and so we hypothesized that the thumbnail would also be important.

Overall, our expectations were:

This goes against the findings in our previous experiment but when we tested cartoon v face to camera video, the cartoon thumbnail used the AdEspresso mascot. In this experiment, the cartoon image is much more generic and so is unlikely to be as engaging.

As it provides the viewer with more information.

The main advantage of the thumbnail is getting people to click when they either haven’t watched the video or only viewed a couple of seconds of it when they were scrolling through their feed.

Here are the results for traffic and conversions:

This results in a cost per install as follows:

We can also consider the video view and relevance score metrics:

In line with our hypothesis our conclusions are:

As we mention with all our experiments, we don’t suggest you follow a set formula such as “always use a photo and don’t add text”.

Rather, it shows that split testing can have a large impact on the outcome so be sure to add thumbnails to your testing strategy.

If you can halve your CPA not only does that save money but the chances are it makes the campaign much more viable and so you can scale your ad spend, resulting in many more conversions.

We can conclude though that

You should always use highly engaging thumbnails which are relevant to the video.

For the best performing video, only 28% of impressions resulted in a 3-second view. This impression to view ratio is what we commonly see in campaigns, only a fraction of your audience actually watch the video.

Success for a Facebook ad also depends on several factors coming together.

The best thumbnail got the most post reactions, this likely contributed to a lower CPM, more impressions then resulted in more clicks even though the clickthrough rate was lower and this, in turn, led to more installs.

It’s also likely that the conversion rate was aided by Adam being featured on the Chrome web store listing, so Adam’s thumbnail matched the landing page. The cartoon images weren’t used on the landing page so didn’t reinforce the message in the ad.

One final thing to note is that the number of conversions isn’t statistically significant, more budget would be required to have full confidence in the results.

As we’ve mentioned already though, our message isn’t that a certain thumbnail gives a specific CPA, instead, we conclude that with testing you have the potential to halve your conversion cost.

For most businesses, producing videos is a time consuming and fairly expensive process. But while they go to all the effort of recording and editing, they don’t give the thumbnail any thought.

Our experience has been that clients rarely include a thumbnail image when sending the videos to their advertising department or agency.

Often, a thumbnail is chosen at random from the video frames and as we have seen in this experiment, this can have a major effect on the outcome of the ad campaign.

Selecting thumbnails should be an important and integral part of the video production process, and we urge any video editor or graphic designer to include a separate thumbnail when sending the video to the advertising team.

Better still, a range of thumbnails should be included so that split testing can be performed, with the potential to halve the CPA.

When was the last time you tested thumbnails in your video ads? Let us know what results you saw in the comments below.