You are here: Home / Blog / How to Use Facebook Lookalike Audiences to Scale Your eCommerce Business

These audiences of people that haven’t engaged with us before are called cold traffic, as opposed to our Facebook fans, leads, and customers which have already engaged with us and are referred to as warm traffic.

To select a cold audience to target, there are basically two methods. 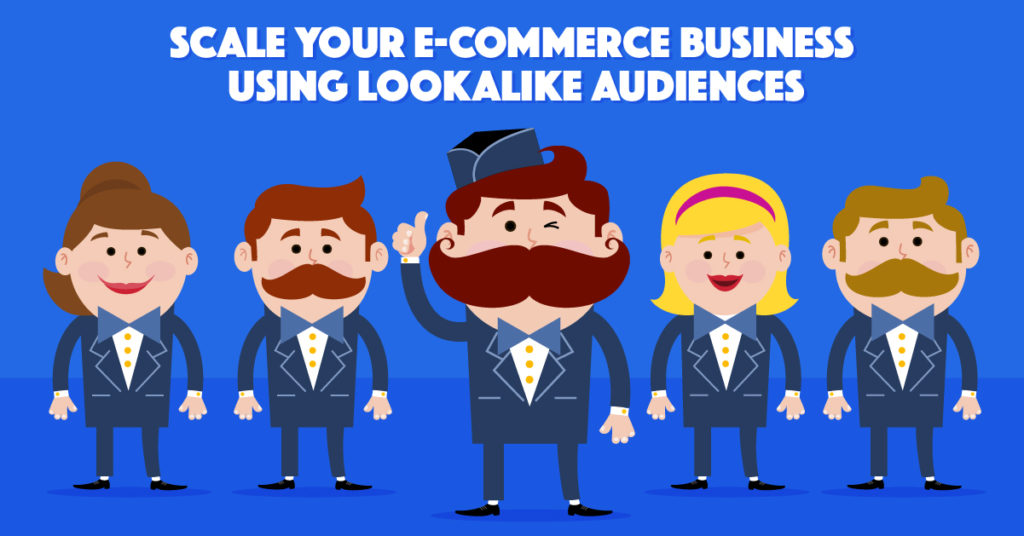 The first is to use interests and demographics, as we covered recently in our guide: How To Find The Best Audiences To Target On Facebook.

The second option is to use Facebook Lookalike Audiences.

And as these last ones often give the best results and are very quick to set up, today we’re going to explain how to create and get the most out of them.

There’s a very simple definition of a lookalike from Facebook:

A lookalike audience is a way to reach new people who are likely to be interested in your business because they’re similar to your best existing customers.”

So, you give Facebook a source audience (sometimes also called a seed audience) and Ads Manager will use all the available data to find common themes and from this create an audience of people will very similar characteristics.

When creating a lookalike you can choose the percentage, so a 1% lookalike will be the 1% of Facebook users in that country that most closely match the source audience.

That means you’ve instantly eliminated the 99% that are the least good match, instantly giving you a high performing audience to target.

This saves a lot of time as you don’t have to keep creating new audiences for every new campaign.

Interests Based Targeting vs. Lookalikes Audiences

How accurate is the interest categorization that Facebook uses?

Go to the Settings menu for your own profile, then select Ads from the left-hand menu on your desktop and you’ll be presented with your own options for ads: 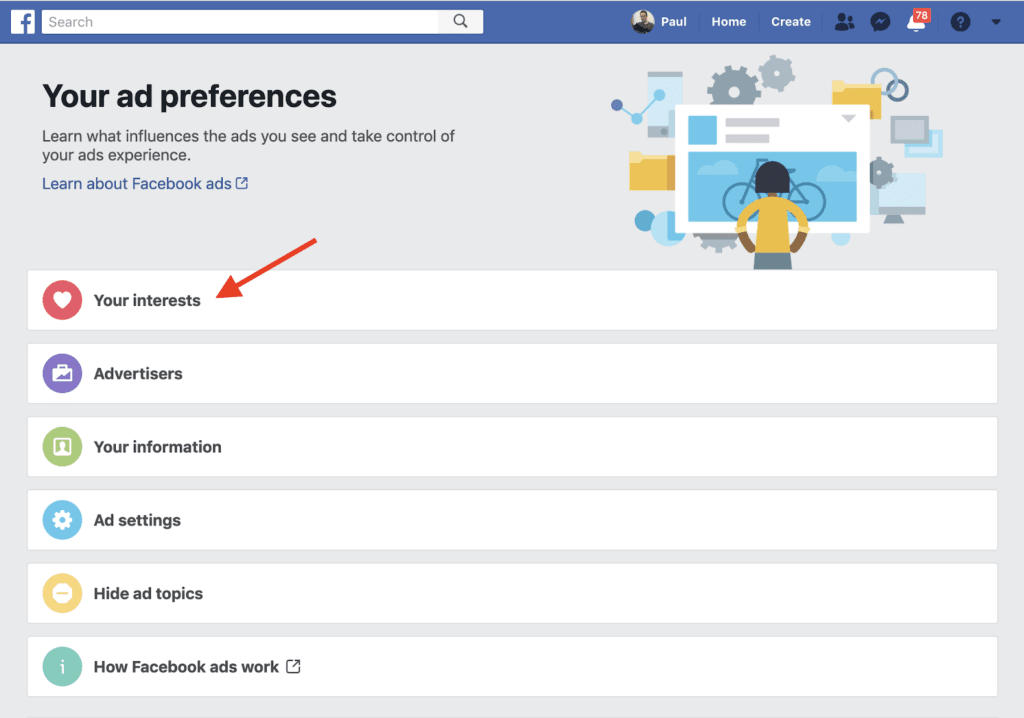 Under “your interests” take a peek.

Some of the interests are highly accurate, for example, it understands that I work with Shopify and WordPress sites using my MacBook and Android phone while streaming music from Spotify with my Bose headphones…the stereotypical digital marketer!

Not everything is as accurate though. Remember, Facebook has been mainstream for 10 years and so a lot of data might be outdated or Ads Manager might be misinterpreting certain signals. For example, I use the Vivaldi web browser and Facebook has me listed as being interested in the music of classical composer Antonio Vivaldi. 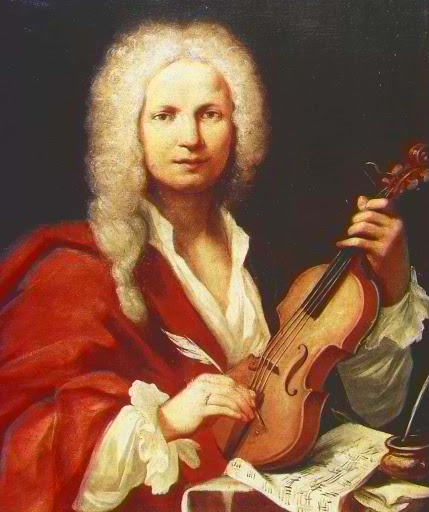 The guy in the portrait above is clearly NOT a web browser!

Similarly, Facebook thinks I’ve visited Canterbury, New Zealand when I actually took a day trip to Canterbury, UK which is only 11,000 miles apart. And if you check under the food section you’ll see it lists seafood and veganism together and raw food and barbeque.

In conclusion, interest-based targeting can be highly accurate at times, but it can’t be relied upon 100% as interests can become outdated or categorization can be incorrect due to misinterpreting a single data point.

One of the best things about using lookalikes is that they’re so quick to create.

In Business Manager go to the Audiences section, click the blue Create Audience button and select the Lookalike Audience option. 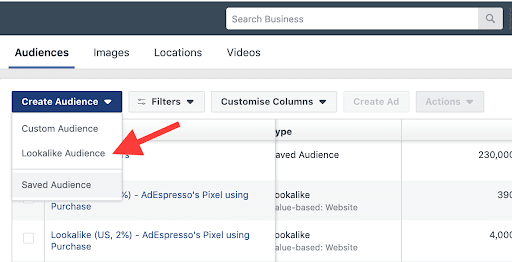 Next, choose a source audience, the country, and percentage and hit the blue Create Audience button.

Congratulations, you’ve created a high-quality audience in under 10 seconds! 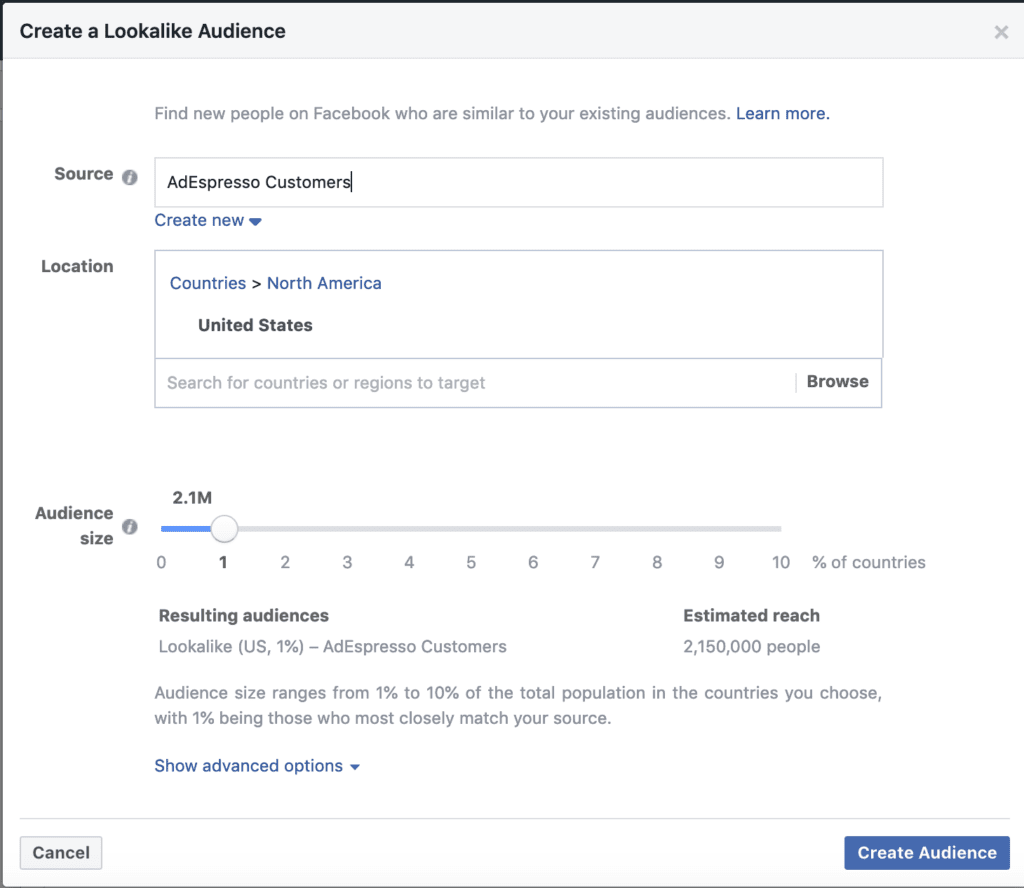 You can expand out the Advanced Options section to create up to six different percentage audiences at once.

As they are free to create, go ahead and create a range of audiences so that you have them to hand for future ad campaigns. 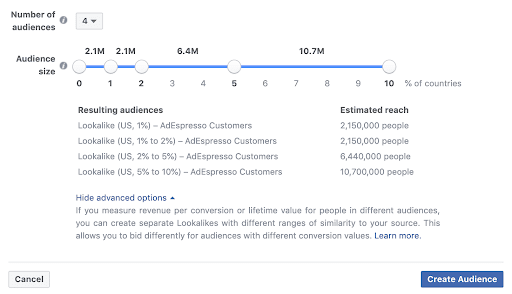 Once Facebook has been given a source audience, how does it decide who matches this audience?

We’ve asked Facebook and haven’t been given a definitive answer but from our discussions with Facebook and other information available, the signals they are likely to use include:

With the Facebook pixel on millions of websites, there is an endless amount of data on who signs up as a lead, who purchases, and even how much they spend.

Combine this with likes, comments, shares, videos viewed etc on Facebook plus demographic data and it’s possible that hundreds or thousands of data points go into making a lookalike, although we don’t know the exact formula that Facebook is using.

For eCommerce, we’ve previously covered how to create value based lookalikes by uploading a customer lifetime value file.

However, there’s a new type of value-based lookalike audience in town that is much better as it is based on data generated by the Purchase pixel event. 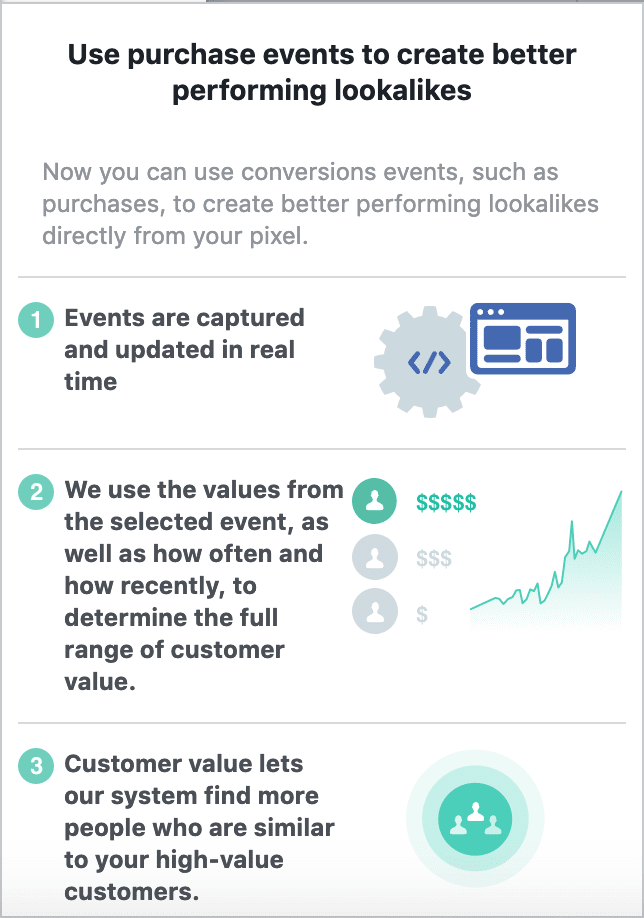 These new value based purchase lookalikes have three advantages over standard purchase audiences:

Previously we could create a source audience based on value OR recency OR frequency but never before have we been able to combine all three so easily.

So, for eCommerce use the new value-based lookalikes wherever possible.

The minimum size for a source audience is 100, but keep in mind this doesn’t give Facebook much data to work with, so they recommend including between 1,000 and 50,000 people.

Quality is more important than quantity as the algorithm is looking to find similarities, therefore if you have enough people in your audience you might be able to segment it down to find a common theme.

For example, if you have a large email list, instead of including everybody in the source audience you could remove those that have been on the list for less than 3 months. Alternatively only include those that have opened one of our emails recently or have clicked on a link within the email.

A whole range of pixel events and custom audiences can be used as a source audience for a lookalike.

These include but aren’t limited to:

Always aim for a source audience that most closely matches your end goal.

For example, if your aim is lead generation, consider using an audience of lead pixel fires, an email custom audience or lead form completions.

You can use more than one lookalike in an adset if you wanted to increase the audience size while still maintaining quality.

If you’re just starting out with a new account there’s a high chance that you don’t have the 100 purchases necessary to create a lookalike, and you certainly won’t have the minimum of 1,000 that is recommended.

So, start lower down the funnel and work your way up to better source audiences as you scale.

If you have an established brand but haven’t been doing eCommerce yet, you can use a source audience of Facebook fans or leads.

If your business is completely new then you can start by running a video views campaign to a broad audience and building an audience of video viewers.

From this create a lookalike and run traffic to the website to start feeding your funnel.

Your source audiences as you move up the funnel could be:

If you are expanding your business into new territories you can create a lookalike for the new region based on data from an existing country that you have data for. This can be really useful as a starting point when you don’t know what interests to target in the new country. Naturally, once you get enough leads or sales in the new country you can switch to using that data for a more accurate lookalike.

You can also combine several countries in one lookalike audience. When doing so you’ll see an information panel letting you know that one country may have an audience that is proportionately larger than the others: 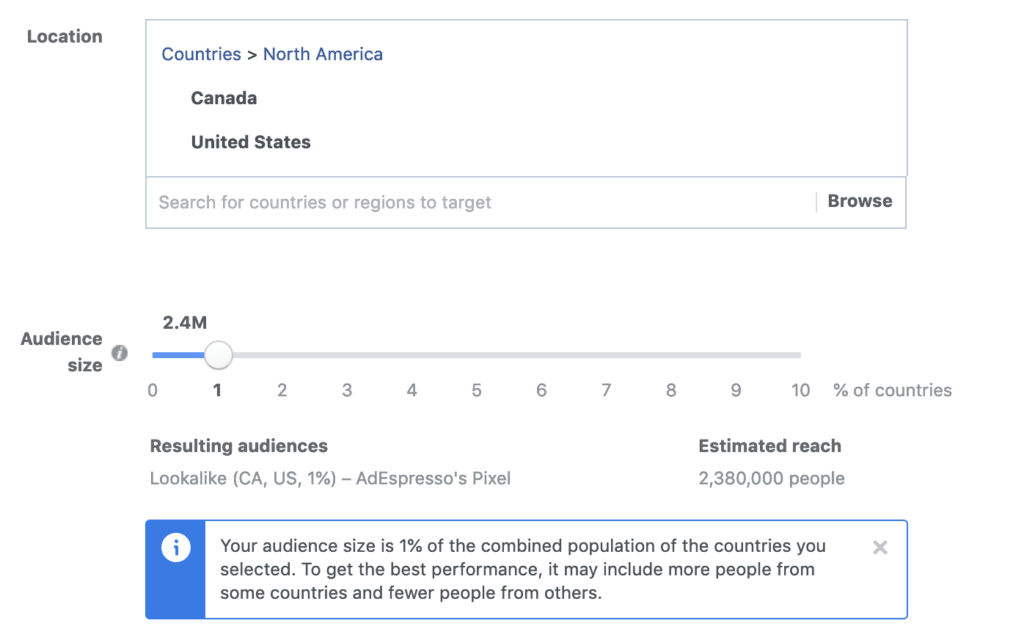 There’s also an option to create a lookalike for a region:

Perhaps you want to target all countries in the EEA (European Economic Area), one click is all it takes to include all the countries.

The most common question we get asked about lookalike strategy is “what percentage should I use?”.

Beware any answer giving an exact percentage unless you know what country they’re referring to. 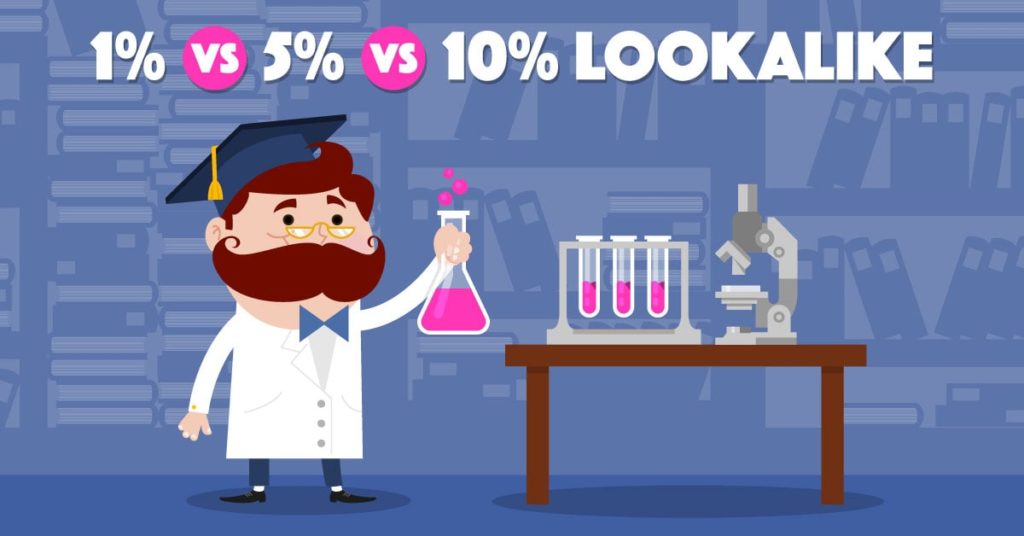 As a starting point, we’re often aiming for around 1-2 million in our cold traffic audience, assuming we’re covering the whole country and not just a city.

In our $1,500 Experiment for lead generation in the US the following results were generated: 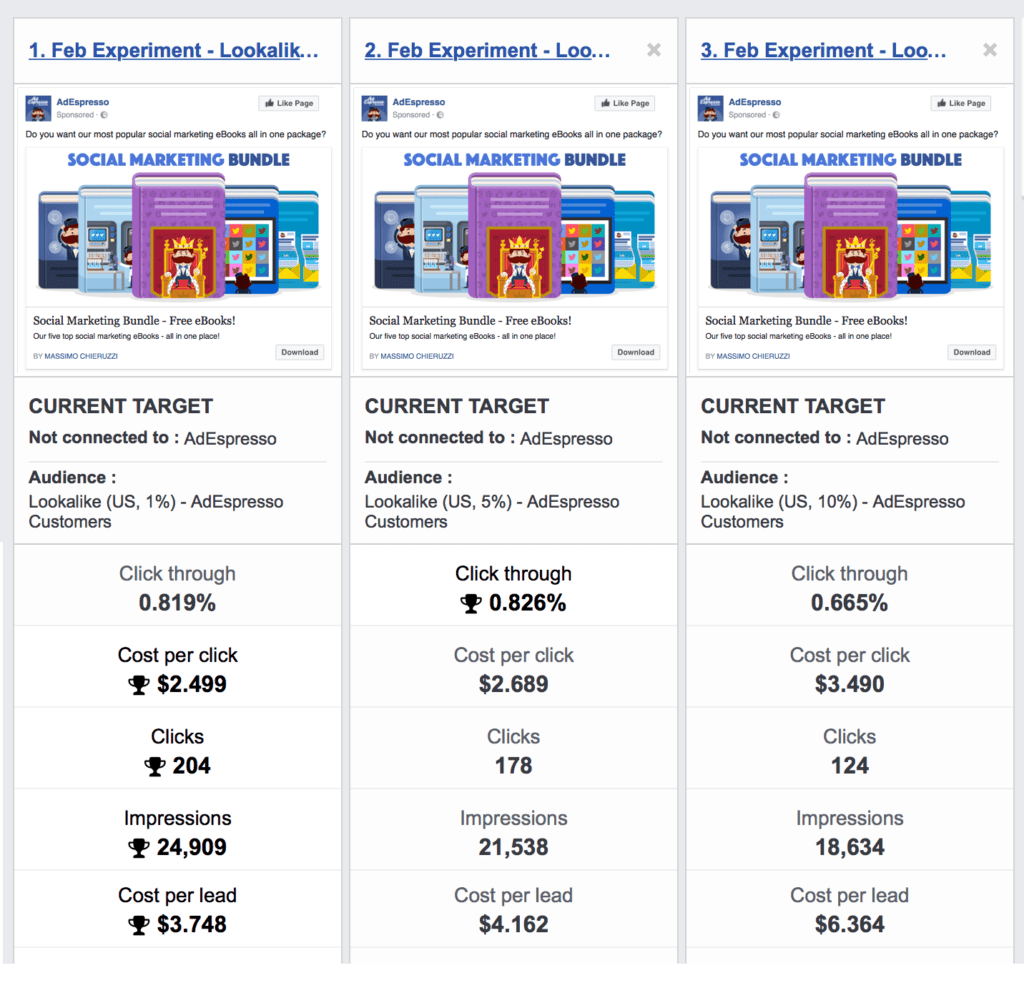 As your ad spend increases you will start to saturate your original lookalike audiences, so over time move up to the larger percentages or switch to a different source audience.

In theory, a lookalike shouldn’t need any age, gender or interest restrictions as Facebook is already taking this into account.

However, it’s still worth testing some layering, for example in the US a 10% lookalike (21.5 million people) combined with your top 6 interests to create an audience of 1 million can be super powerful.

Traditionally, creating cold audiences was a lot like a hipster brewing coffee: it was a time-consuming process with each artisanal, handcrafted audience taking a lot of research to find just the right combination of interests, locations, age, gender, and other demographics.

Now, we can often get a better result using a lookalike audience that takes just a few seconds to create and has the advantage of dynamically updating.

There can occasionally be drawbacks to using Facebook Lookalike Audiences, the main one being that Facebook doesn’t understand what your business or product range is, all it can look at is the data points it receives.

However, for most clients, we see excellent results and use lookalike audiences around 60% of the time for cold traffic and interest-based audiences the other 40% of the time.

It does vary from business to business so always test both approaches to discover what works best for you.

Even for B2B we’re seeing good results with Facebook lookalike audiences and use them regularly for our own lead generation.

With audience selection increasingly becoming a “done deal” it gives us more time for working on the more creative aspects of an ad campaign such as creating images and videos.

What do you think? Is there something we didn’t cover? Which strategy do you use when creating your Facebook Lookalike Audiences? Let us know in the comments!