You are here: Home / Blog / Facebook Interest Targeting Expansion: Should You Use It? A $1,000 Experiment

So you have a business. Your customers love you and they helped you get where you are, but now it’s time to grow. You need to expand your reach, finding new people interested in what you offer.

But how do you find the best interests to target for your Facebook ad campaigns? It can be very challenging.

Facebook’s Interest Targeting Expansion helps advertisers to overcome this challenge and reach more people, without you having to manually add more interests. 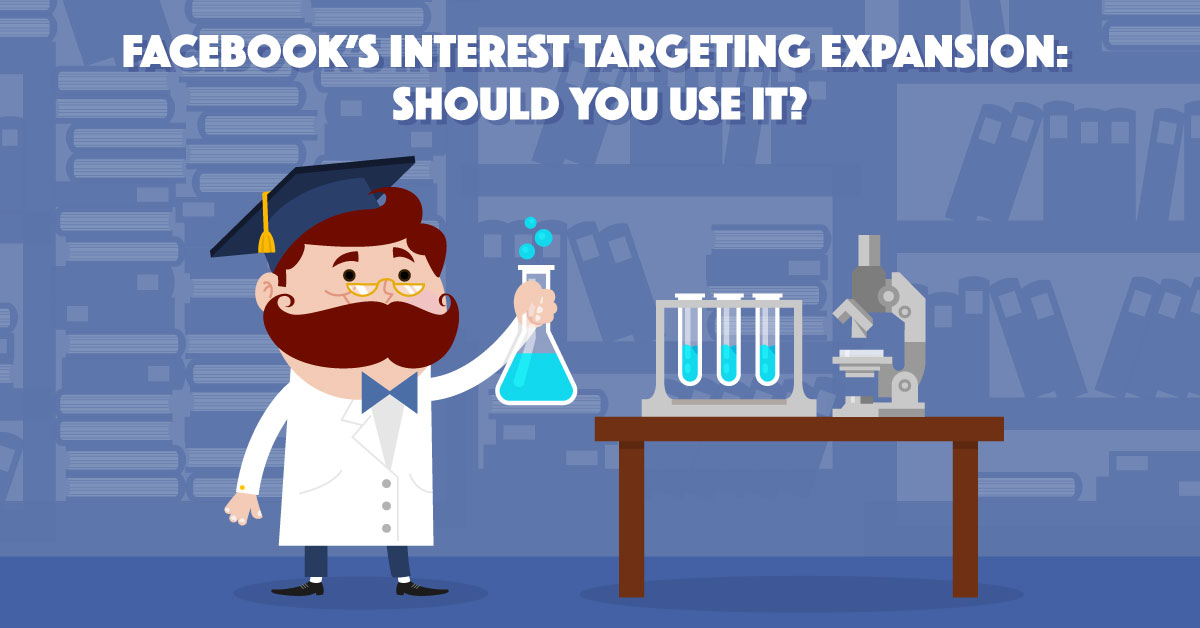 Basically, by selecting this option you allow Facebook to adjust your detailed targeting and automatically add interests to your ad set to get you better results.

But will Facebook’s algorithm be better than your brain when it comes to deciding who’s gonna see your ads?

We are not afraid of challenges, so we put Facebook’s Interest Targeting Expansion to the test.

If you’ve run Facebook ads for a while and use interest-based targeting, you’ll have noticed the checkbox to “expand interests when it may improve performance at a lower cost per result”.

When we hover over the tooltip, Facebook goes on to explain:

This option lets Facebook automatically expand the interests in your detailed targeting criteria if there’s a chance to reach more people likely to convert.

If we then dig into Facebook’s help files, there’s a fuller explanation:

Note the wording that they use in each case:

This vague messaging has caused confusion, and one of the most frequent questions we get asked at AdEspresso is:

There’s only one way to find out, and that’s to head to the Batcave and run another $1,000 experiment. 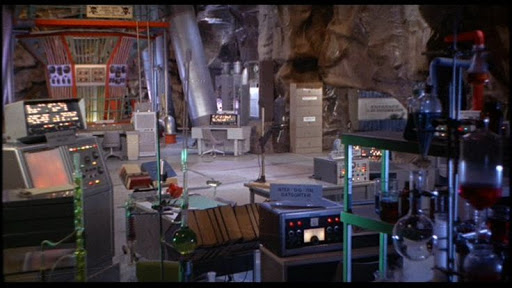 Our goal was to measure the cost per registration for our Facebook Ads Targeting Blueprint webinar. 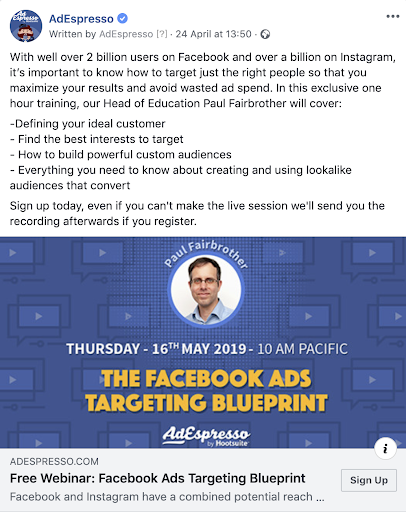 When clicked on, this took the user through to the landing page where we set the Complete Registration pixel event to fire when the submit button was pressed: 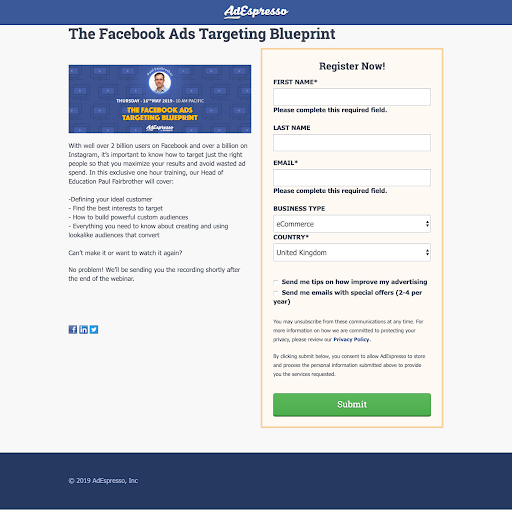 To select the first interest to target, we used Facebook’s Audience Insights which we’ve covered in depth here.

The interest with the highest affinity score of 5273 was Bing Ads so we chose that one:

The targeting we used was:

For the Bing Ads adset, the effective audience size was 39,000: 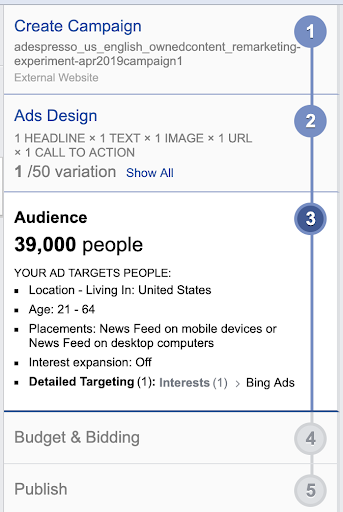 With interest expansion turned on in the second adset, the audience size jumped to 150 million: 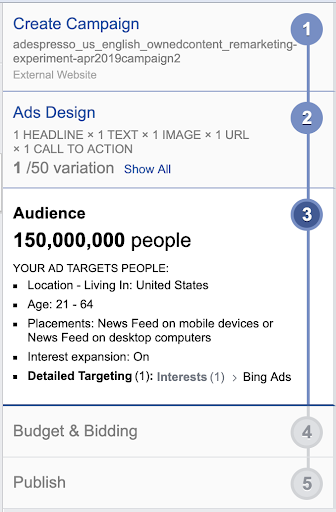 So, our first test was to see how well interest expansion works with a small but very high-affinity interest.

We also wanted to see what would happen with a much larger interest audience.

The best match for this was Hubspot.

The affinity score was lower at 685 but we used it as it contained 940,000 people we could target:

Again, when interest expansion was turned on the audience size jumped up to 150 million:

Making any predictions was incredibly hard because so little information is known about the mechanics of how interest expansion actually works.

When it makes the jump from 39,000 to 150 million, does it still focus on the core audience or cast a very wide net?

Our hypothesis was that using interest expansion would result in a lower CPM but also a lower conversion rate.

The unknown is by how much these would vary, would the cheaper traffic costs outweigh the lower conversion rates?

These were our predictions:

Would we be right? The only way to find out was to put it to the test…

Do you want to know the behind the scene of this experiment?

Do you also want to learn all the secrets the Pro use to scale their ad spend in a sustainable way? How do they increase the number of sales, leads, and engagements, without impacting their ROI? And how you can do it too?

Then all you have to do is click on the image below and register for our next FREE webinar! 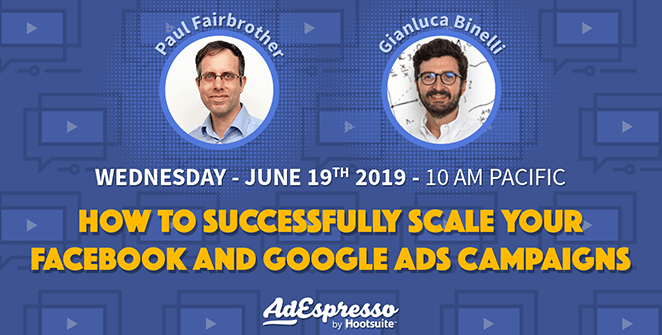 Click to book your seat for our next webinar. It’s FREE!

During this exclusive one-hour live training we’ll cover much more than just this experiment. You’ll learn:

And if you can’t make it for this live session or want to watch it again, we’ll be sending you the recording shortly after the end of the webinar.

Here are the results for the Bing ads interest which had the highest affinity score and audience sizes of 39,000 and 150 million depending on whether or not expansion was used: 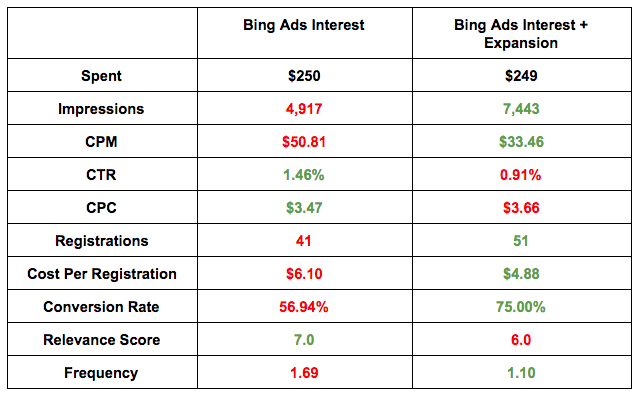 Next up is the Hubspot interests which had a lower affinity score but a larger audience size of 940,000 and 150 million when expanded: 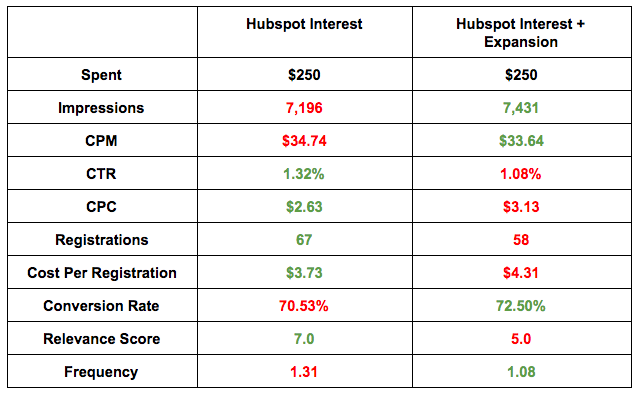 Our hypothesis was proved to be incorrect, as the adset that we believed would give the lowest cost per registration was actually the highest.

So, how can we interpret the data when expansion both increases and decreases the CPA?

Instead of a simple yes or no answer when deciding to use expansion, the most likely explanation is to consider a hypothesis based around audience size:

New hypothesis: For cold traffic, an audience size of around 1 million is ideal, with under 100,000 being too small and above several million being too large.

The Bing Ads adset of 39,000 has a much higher CPM than the other three and has a relatively high CPC. The audience is also rapidly saturating with a frequency rate already at 1.69. Crucially, the conversion rate is the lowest, even though it’s the audience with the highest affinity score.

It looks like with such a small audience, Facebook is struggling to optimize properly and find enough of the right people to convert. A small audience also results in a higher CPM, and these two factors combined give a high cost per registration.

For the Hubspot audience, the 940k size is ideal: it’s still well defined, but also it’s large enough to keep the CPM, CPC, and frequency down.

Just as importantly, the pool of people is large enough for Facebook to pick out those with the highest potential of converting, giving a reasonable conversion rate.

Takeaway #2:
For larger audiences of around a million, consider leaving off interest expansion, especially until the frequency rises.

It would be nice to have a cookie cutter formula for Facebook ads strategy and conclude by saying “check this box” or “always use options X, Y, and Z”.

In this case, though, the advertiser themselves can bring extra value by looking at the data available before making a decision.

For a small audience of under 100k, most likely it will keep costs down by enabling expansion.

There is another option available, could you combine several small interests together into the same adset to increase the reach? Alternatively, could you swap to another audience with a similar affinity score but a larger size?

When working with larger audiences, such as those containing a million people, there’s a less initial benefit to using expansion.

Perhaps start off without expansion, then monitor the frequency rate and enable it later if the CPA and frequency start to rise.

Alternatively, if you know from the start that you’ll be using a high budget it might be worth using expansion and paying a higher cost, to begin with, and focusing on the long term CPA.

By using all the data – both before starting the campaign and also monitoring the metrics while it’s running – you can make an informed decision.

If you’re still not sure, why not set up a simple A/B test as we’ve done here?

Or, even better, why don’t you ask our top experts during our next webinar?

The appointment with our head of education Paul Fairbrother and his incredible guest, Gianluca Binelli (Lead online acquisitions on Paid Search campaigns at Google and founder of Booster Box, the first “Scientific Online Marketing and Technology Company”) is for June 19, at 10 AM (Pacific Time), click here (or on the image below), to reserve your FREE seat!