You are here: Home / Blog / Inside Facebook’s Campaign Budget Optimization

If you use Facebook for your digital marketing and advertising, you know that campaign budget optimization isn’t easy.

Unless you’re a gigantic data firm with a treasure trove of information, it can be hard to tell how much money you should spend on advertising for any one particular audience. 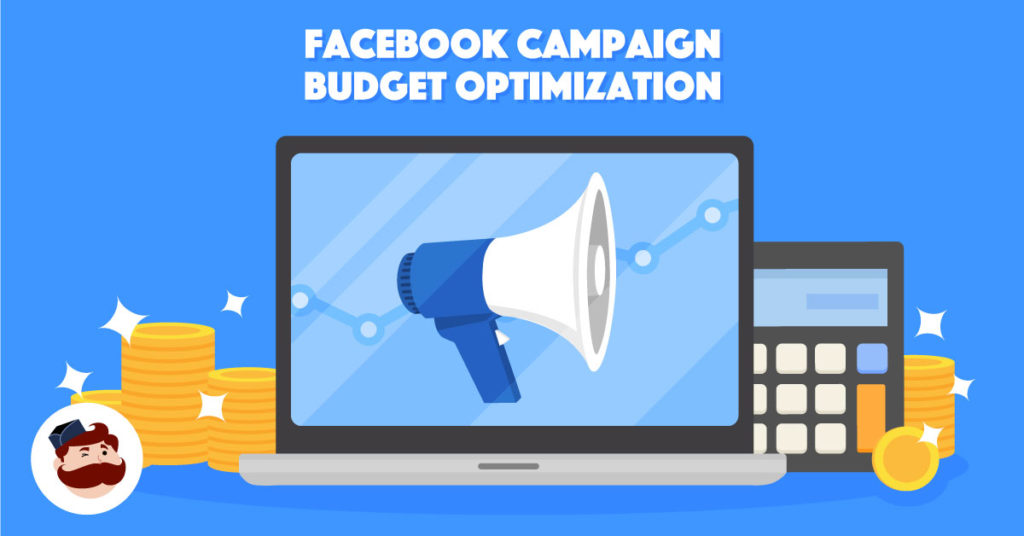 It’s a new feature that helps you automatically redistribute your budget to the best performing audience.

In some cases, this feature will be mandatory and can completely change how you create and scale your Facebook ads campaigns.

So, how do you prepare for the upcoming changes to your account?

Just keep on reading and you’ll be all set!

In this article, we’ll show you:

On 8th November 2017, Facebook introduced Campaign Budget Optimization or CBO which allows Ads Manager to optimize a campaign even further by deciding how to divide the budget between ad sets, not just ads.

While this change may seem frightening at first, we’ll show you how to prepare for this change by utilizing this new feature and analyzing the results.

Let’s get started! But first…

A Note on Facebook’s Conversion Optimization

One of the many reasons why Facebook advertising has been so popular with businesses is that there is already built-in machine learning that helps to maximize your return on ad spend.

This algorithm includes powerful optimization options, as we saw in our $1,000 experiment where we tested optimizing for different objectives such as link clicks, reach, engagement and conversions.

Not only can Ads Manager optimize for a certain goal, but it can also make your ad spend go further by giving preference to the best performing ads within an ad set.

Here’s an example from a recent AdEspresso campaign:

This ad set – or group of ads – has a budget of $45 a day, and Facebook can decide how to divide this between the ads depending on performance.

Facebook has built-in optimization where ad delivery can be improved to show the ad to the best people in the audience based on recent conversions.

This optimization is based on the learning phase and happens at ad set level.

Budget optimization is different as this considers what audience to allocate the most budget to, rather than who to display the ad to within each audience.

There is some overlap, as large budget shifts can reset the learning phase and Campaign Budget Optimization helps to avoid this.

On the whole, though, Campaign Budget Optimization and adset optimization are different things.

With the addition of Campaign Budget Optimization, Facebook hopes to improve our results once again by taking a step back and letting the algorithm manage the budget of the adsets entirely.

This means that instead of us dictating the adset budget and how much we want to spend for each target, we’ll simply tell Facebook how much budget we have for the entire campaign and the algorithm will distribute it as it sees fit.

So what does this mean for our results?

How do we even begin to measure the differences between campaigns that have this feature enabled, and those that do not?

Now, normally we would jump right into the definition of Campaign Budget Optimization and how to analyze your results, but it’s important that we understand exactly how Facebook campaign budgets work beforehand, as this is a topic of much confusion for even the most capable advertisers.

Let’s start from the top and work our way down.

Much like the non-marketing definition, the campaign represents an organized effort towards a goal. In this case, a campaign specifically refers to the collection of ads and adsets we’ll use to reach our goal, be it link clicks, conversions, etc.

Think of it like the tortilla of your marketing burrito. It holds all of our delicious ad goodness inside!

Taking it a step further, we come next to adsets. Adsets are, quite literally, sets of ads that share the same targeting, bidding, and schedule.

Very simply, ads are the creatives that will be shown to your audience. This encompasses your photos/videos and copy.

For those of you who are visual learners, you can see a flowchart of the structure below: 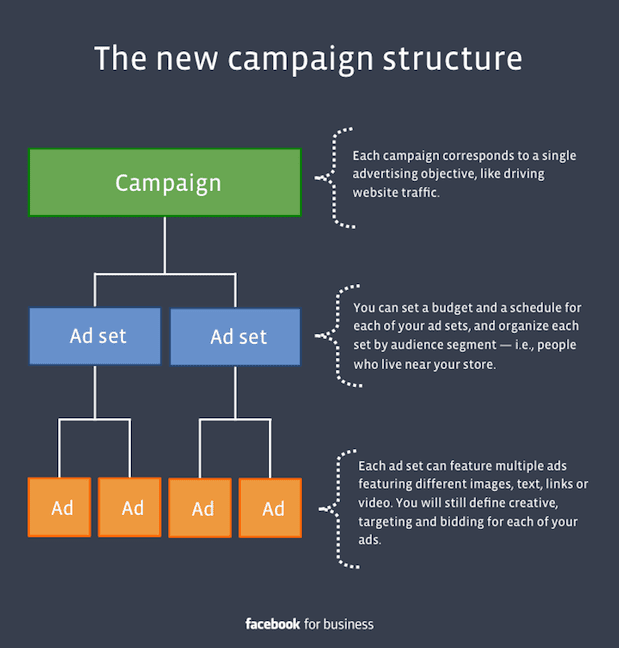 As you see in the example above, the budget for the campaign actually resides in each of the adsets, not on an ad or campaign level.

Now that we know how these assets play their part in the grander scheme of things, let’s dive into the changes coming with Campaign Budget Optimization.

What is Campaign Budget Optimization?

Facebook states the definition of Campaign Budget Optimization very clearly in the knowledgebase:

If we want to visualize the differences, we can reference Facebook’s comparison below. 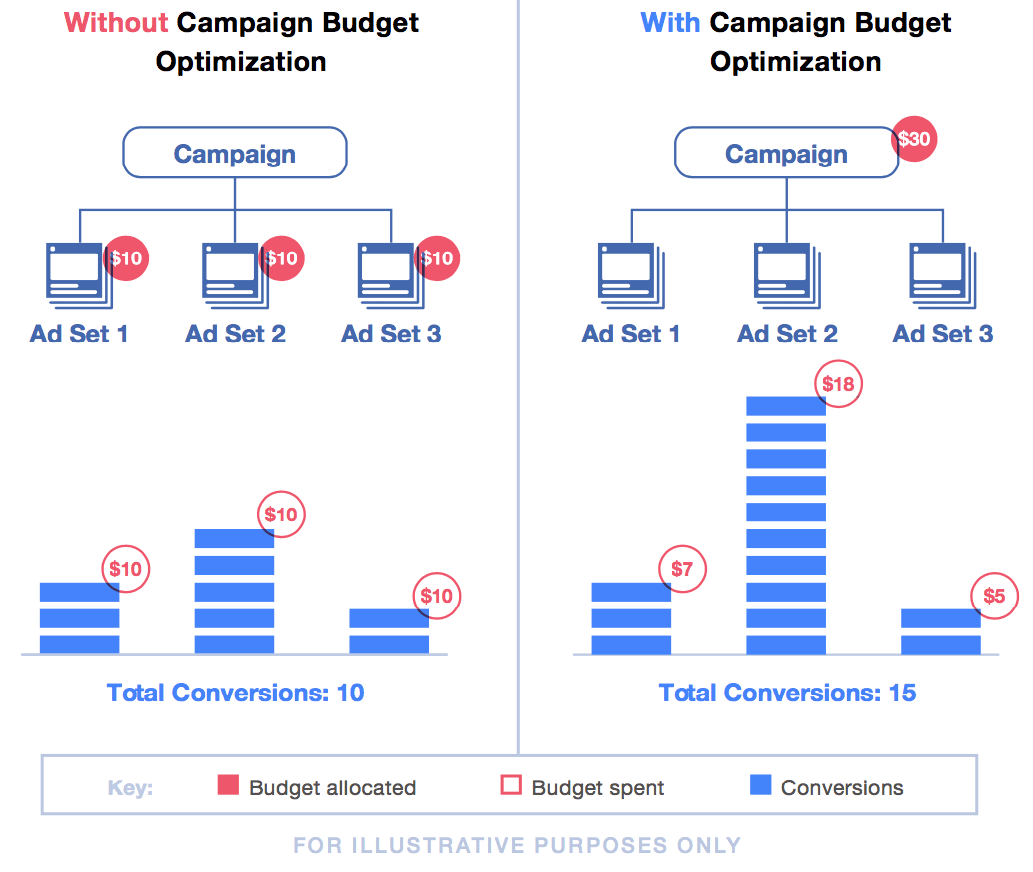 As we see in the chart above, without budget optimization (and without us going into our campaign every day to make adjustments) we’re giving the same $10 to all adsets instead of giving more budget to the ad set that’s converting well for us.

With Campaign Budget Optimization enabled, Facebook is automatically taking the budget and redistributing it to the better performing ad sets.

But how do they decide how the budget should be distributed? Once again, let’s hear it straight from the horse’s mouth:

“We optimize your campaign budget in real time on an opportunity-by-opportunity basis. Our goal is to get you the most results possible, and for the cost of those results to align with your bid strategy.”

In addition to helping you manage your budget automatically, Facebook also boasts several other benefits of this feature. 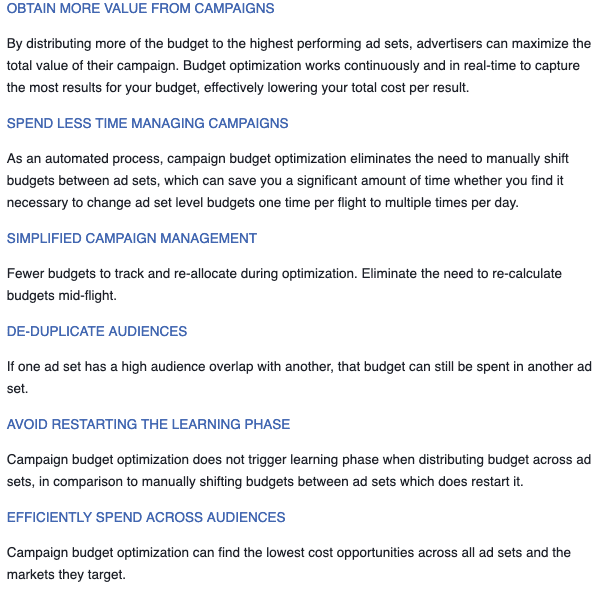 How do you know if Campaign Budget Optimization is mandatory for your account?

If you’re an admin on an ad account that will have this feature set automatically, you should have received a notice in your inbox like the one below: 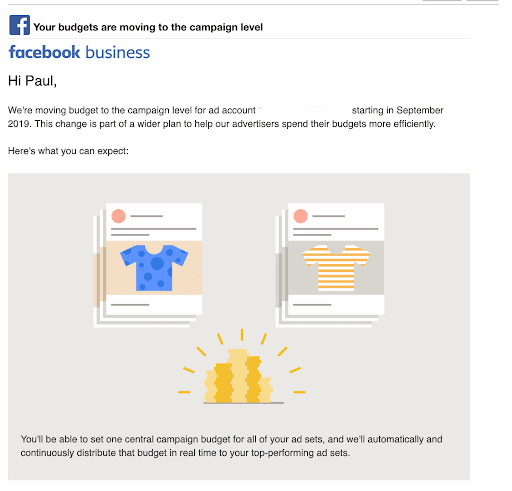 A notification has also been appearing at the top of accounts in Ads Manager for affected accounts:

So far we don’t know how many accounts will have a compulsory migration to Campaign Budget Optimization come September. Anecdotally, the figure looks to be around 25% but this may well change between now and September.

Getting The Most Out Of Campaign Budget Optimization

Now that we’ve learned how the budget works without Campaign Budget Optimization, and how it will work with CBO enabled, it’s time to ask ourselves the most important question…

What’s the secret sauce to getting the most out of CBO?

Here are three specific tactics to use to get the most out of this new feature.

As we covered above, each adset needs a minimum of 50 conversions for stable delivery. There can also be day to day random variation in results such as weekends v weekdays.
The advertisers that we’ve spoken to that are seeing the best results with CBO are giving it 4-7 days minimum before scaling.

Campaign Budget Optimization works best when you separate out your Top Of Funnel, Middle Of Funnel and Bottom Of Funnel or TOFU, MOFU and BOFU as marketers call them.
For instance, you would want to allocate a small but highly valuable warm audience proportionately more budget then a cold audience of people that haven’t interacted with you before.

The “budget & schedule” section of an adset allows you to set these: 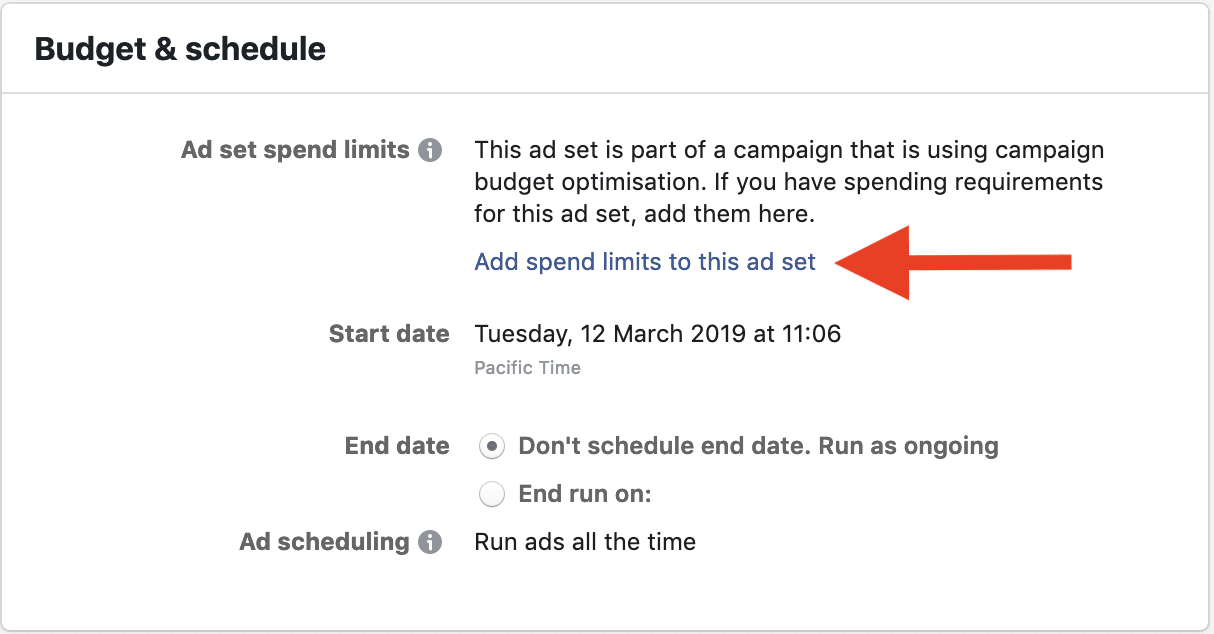 Click on the spend limits section to control the budgets: 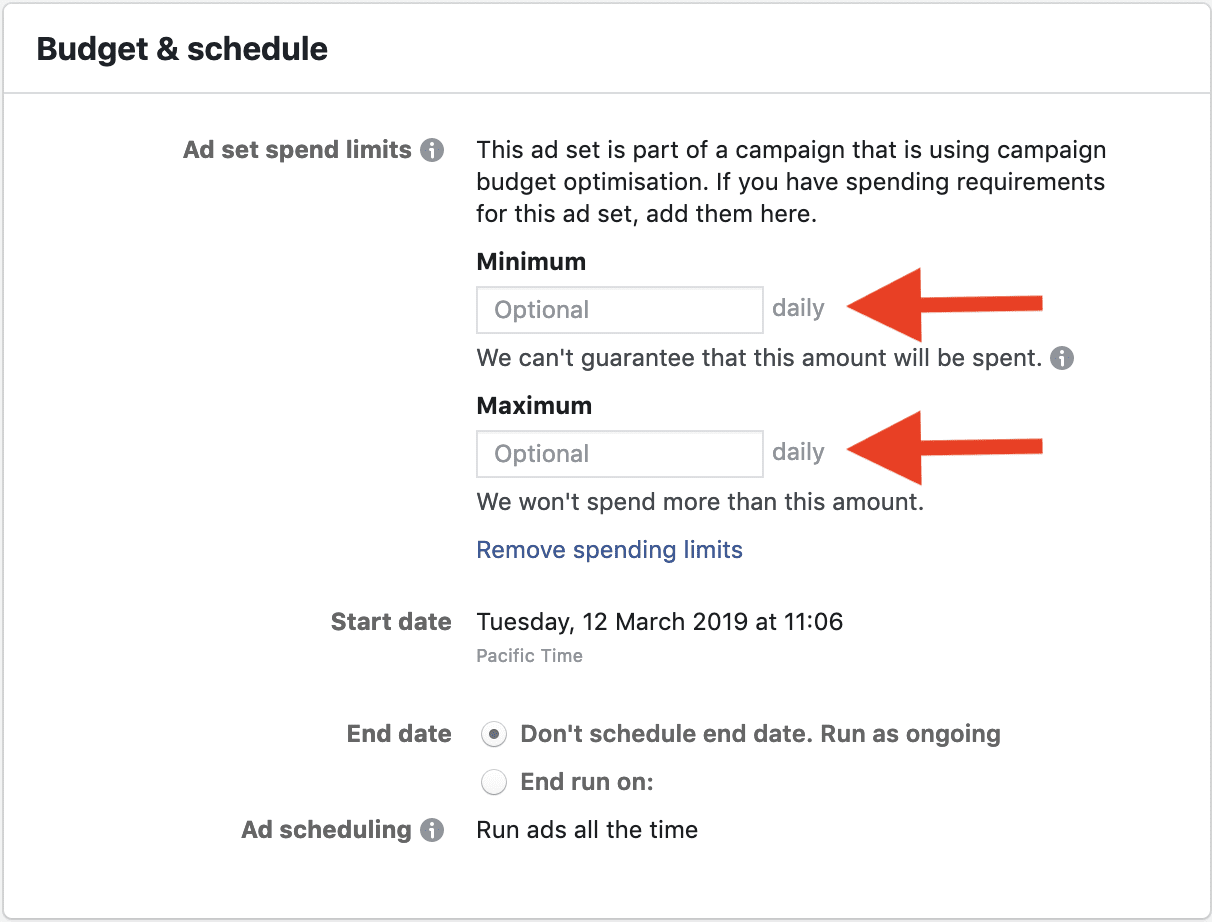 The reason why this is so important is that on some occasions Campaign Budget Optimization can be extreme with how it allocates budget, especially for a new campaign with not much data.

In a campaign with 10 adsets, maybe it could decide to give 70% of the budget to one adset. This can be useful when the campaign is established and it’s clear which adset is best, but at first, it’s better to give all the adsets a chance by setting minimums and maximums.

How To Evaluate Results – The Breakdown Effect

In their guide to using Campaign Budget Optimization, Facebook is keen to stress that you should look at the overall results of the campaign and not focus on the results of each adset. 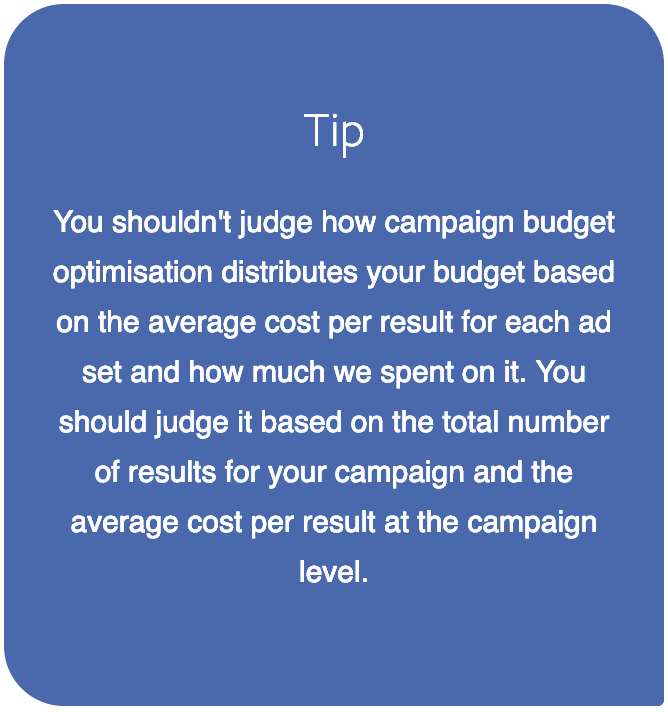 This is due to something called the “breakdown effect” and Facebook have a full explanation here.

What this means is that any given audience or placement only has the capacity to produce so many conversions at a given price.

As the audience starts to saturate, so the price will increase, so it makes sense to increase the overall capacity of the campaign by allocating budget to other audiences.

Here’s an example of CPA by placement:

By looking at the campaign after a day it’s natural to think we should allocate all the budget to Facebook with a CPA of $0.35 and none to Instagram at $0.72.

However, if we did this then the CPA starts to rise on Facebook and it then actually becomes cheaper to advertise on Instagram.

Campaign Budget Optimization can take this into account and decide how much budget to give to each audience to give the overall cheapest CPA.

We need to keep this in mind when analyzing the results of a CBO campaign compared to one using manual budgeting.

The manual campaign can be optimized to leave just a handful of cheap adsets running, however, when we start to scale the CPA of this campaign will rise much faster than one that is spreading out the budget by using Campaign Budget Optimization.

How Should I Prepare for the Campaign Budget Optimization Switch?

If you have been notified by Facebook that your account is being converted to CBO in September then it’s time to get prepared now.

When this feature takes effect, they will be switching over your existing campaigns as well as new ones.

We recommend taking the following steps now in order to prepare yourself for this big change.

You can test Campaign Budget Optimization either with new campaigns or existing ones.

For current campaigns, each adset has to have the same objective, for example, you can’t have one adset optimized for engagement and another for conversions.

September is too close to the all-important Q4 holiday season to begin testing Campaign Budget Optimization then, also ad prices can be very high in Q4 so it’s much better to test during the summer when ad pricing is lower and there’s not so much urgency.

Setting a budget for your ad campaign’s audience has never been easy, but now it doesn’t have to be so hard.

With Facebook’s Campaign Budget Optimization feature and our handy tips, you can start to automate more of your work – leaving you with even more time to pet your favorite furry friend.