You are here: Home / Blog / Everything You Need to Know About Facebook’s Audience Network

The first three are pretty much self-explanatory, especially since you’ve probably seen clear examples of all the placement options that fall beneath them.

But what about the audience network placements? 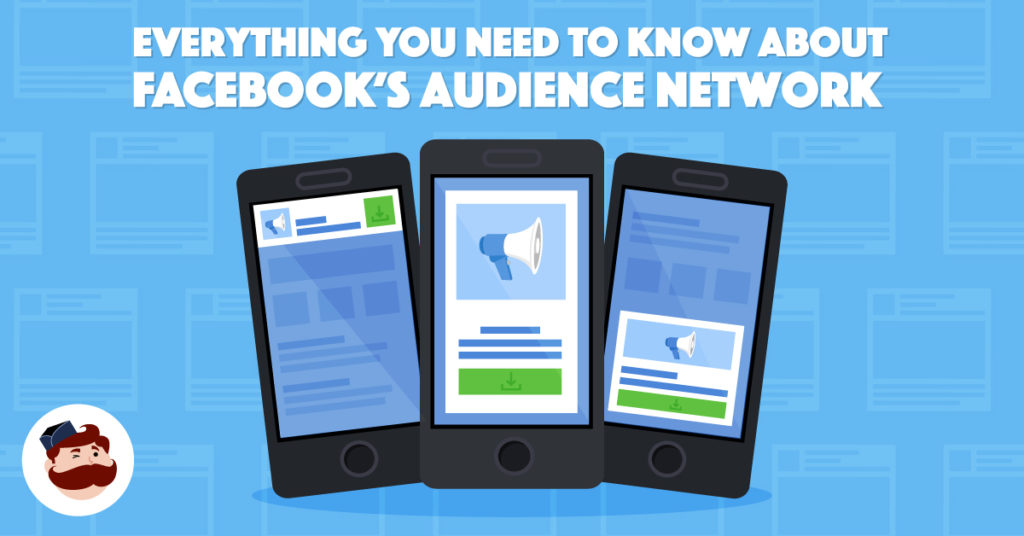 What is the audience network and why should you be using it?

In this post, we’ll discuss all that and more.

We’ll go over everything you need to know about Facebook’s Audience Network so you’ll have a definitive answer about whether or not you should be using these placements for your ads and your apps.

Facebook Audience Network was released in 2014, but there’s a lot of businesses and even some marketers who don’t fully understand what it is.

Facebook Audience Network is an off-Facebook, in-app advertising network for mobile apps. Advertisers can serve up their ads to customers who are using mobile sites and apps other than Facebook,  extending their reach beyond the platform while still getting to use Facebook’s exceptionally powerful ad system.

Facebook’s audience network is also a monetization opportunity for those who have apps. Anyone can join Facebook’s Audience Network, and when people engage with the ads within your app, you get a chunk of Facebook’s resulting ad revenue.

As a bonus, ad formats are flexible, so mobile apps displaying audience network ads can integrate native ads that still fit their design. This means that the user experience will be better, and these ads will perform better as a result.

This is a good question: if I’m paying for the high engagement and excellent placements on Facebook and Instagram, why should I enable Audience Network placements?

There’s two big answers to this question. As we’re addressing them, remember that though the ads aren’t on Facebook or Instagram, you’re still benefiting from the laser-sharp targeting capabilities.

The first answer is that you’re getting extended reach. Your ads are being shown on an additional platform, which could help it connect with the right audience. And, since audience network ads may stand out a bit in an app a bit more than it would in a newsfeed, this could be an advantage.

When you do this, you have more room to bid higher on some of your other placements while still maintaining that desired average CPA bid.

In fact, AdEspresso’s in-depth cost analysis showed that average audience network CPCs consistently stayed well under $0.10, while all other placements ranged from $0.20 (mobile newsfeeds) to over $0.70 (Instagram Ads). 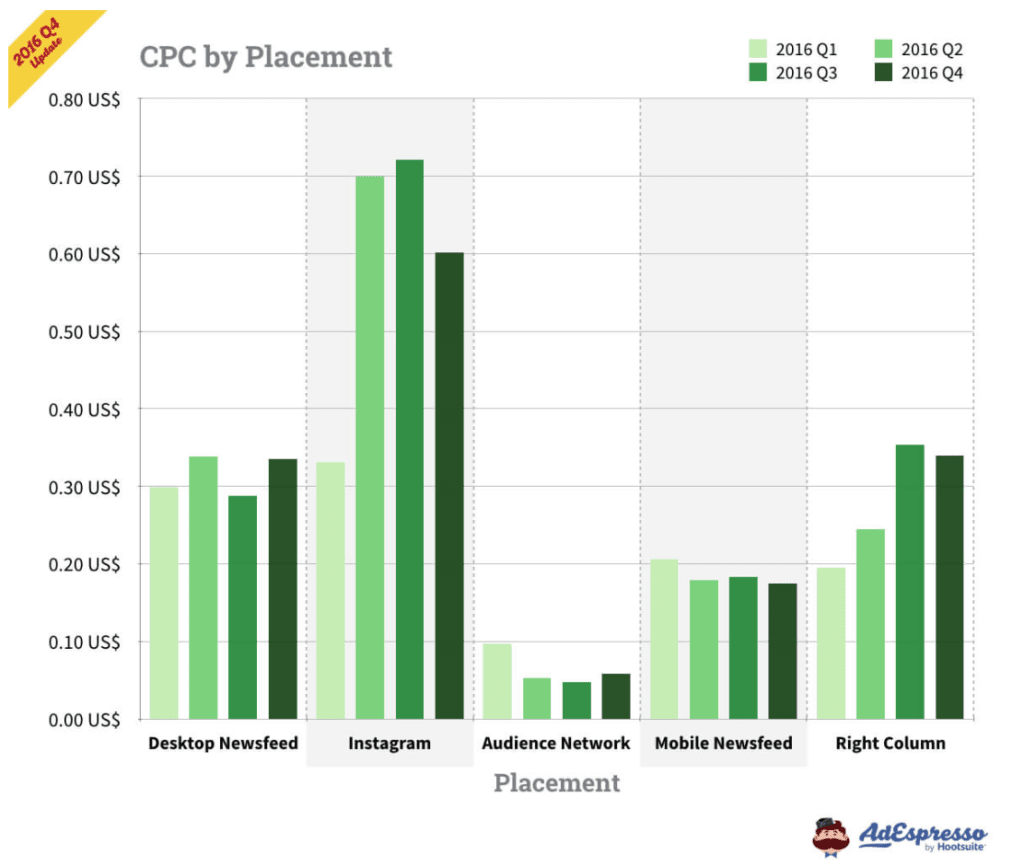 As a result, you’ll be able to afford more placements on more high-ticket placements while simultaneously extending your reach further. Win-win. Oh, and Facebook wins, too, so as Michael Scott would say, win-win-win.

What Do I Need to Know Before Running Facebook Audience Network Ads?

There’s a few things you’ll want to decide right off the bat, and they pretty much involve the exact format and audience placement ad that you’re going to use. You have three different options:

You can absolutely use both video ads and still images, whichever you prefer.  You should, however, stick to the correct aspect ratios for both to guarantee that they look great. By Facebook’s own recommendations, these are:

Why Should I Join Facebook’s Audience Network?

The biggest appeal to join the audience network and connect your app or mobile site to it is the monetization potential.

All you have to do is plow through the initial set up, and you’ll be able to collect passive income from engagement on the ads displayed in your app.

Since the ads use flexible formatting, they’ll look great within your app—like they belong there.

And since the ads being shown to your app’s users are utilizing Facebook’s incredible targeting system, they’re likely to be relevant. This all bodes well for you.

How to Join Facebook’s Audience Network

Joining Facebook’s Audience Network is actually pretty easy; it just takes about fifteen minutes, and Facebook walks you through the whole thing.

First, you’ll either create a new App ID, or select an App you already have connected to Facebook.

To create a new App ID, all you need to do is name the ID and enter in the URL.

Next, you’ll add your app.

Start this process by entering in your app’s iTunes or Google ID.

Once you do this, you’ll create your ad spaces.

There are only four allowed per platform, and they can’t be deleted- only edited. 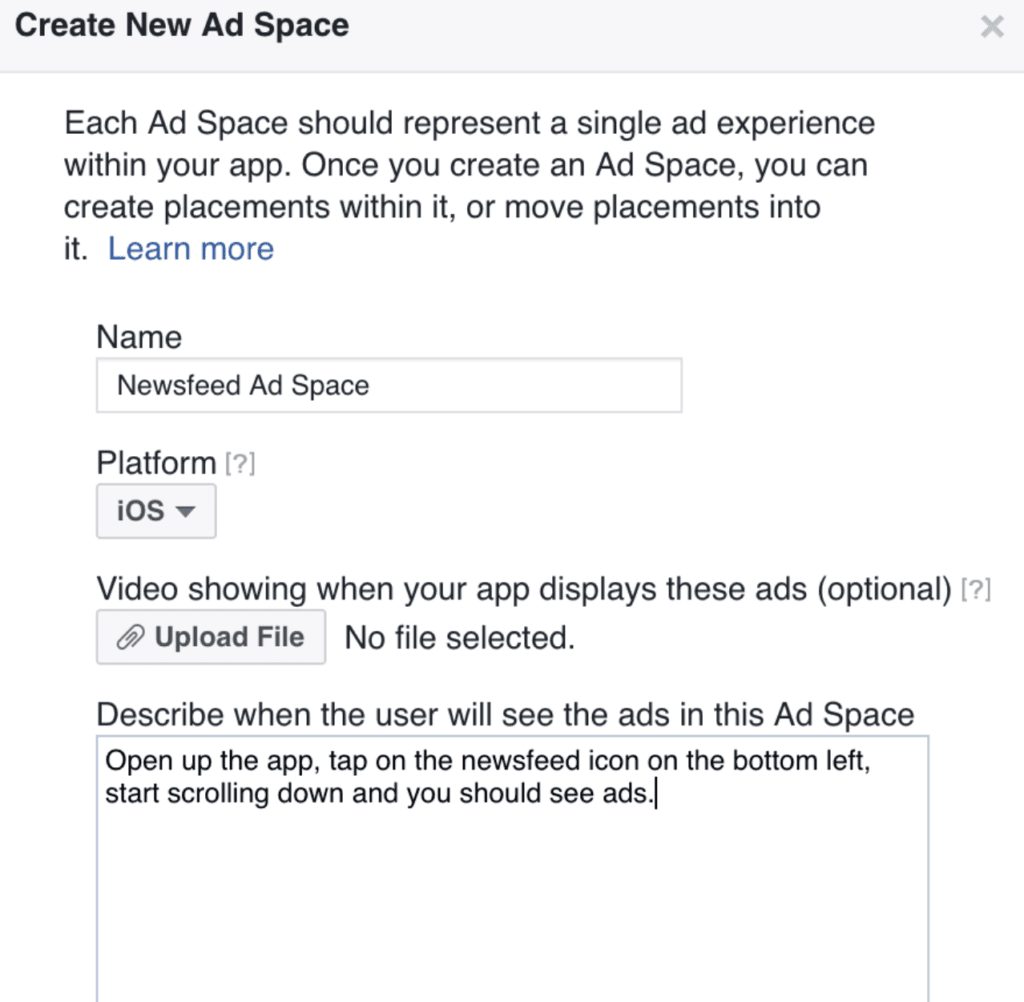 Once you create your ad space, you can then create an ad placement within it. 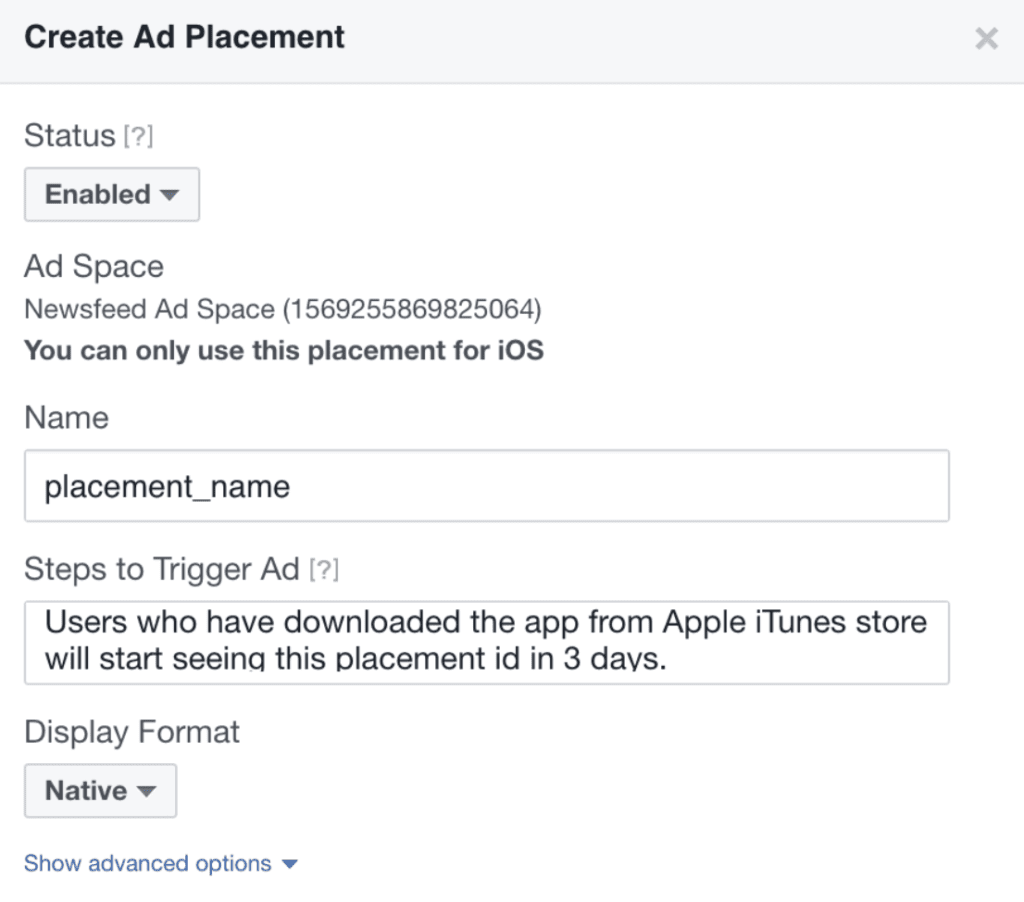 Next, you’ll integrate the Audience Network’s SDK with your app, test its integration, and submit your app for review.

You can see Facebook’s guides on how to do this here, depending on the platform type.

After you do this, just provide payout information so that Facebook can send you your check when it comes.

Facebook’s audience network is an excellent opportunity for both advertisers and app owners.

It helps keep costs down for the businesses and marketers running Facebook Ads with multiple placements.

It also provides a direct source of monetization for app owners.

It’s a great asset to have on hand and use as you wish, and since the placement is automatically enabled for almost all ad campaigns, you don’t have to worry about forgetting to select it.

What do you think? How do you take advantage of Facebook’s Audience Network? Do you use it as an advertiser or an app owner? What benefits has it provided you? Let us know in the comments below!