You are here: Home / Blog / Buying Instagram Followers? Our Experiment Reveals The Truth…

When every blogger and mom-and-pop store seems to have more followers than you, with hundreds of people blowing their comments and engagement rates through the roof, how are you supposed to compete? 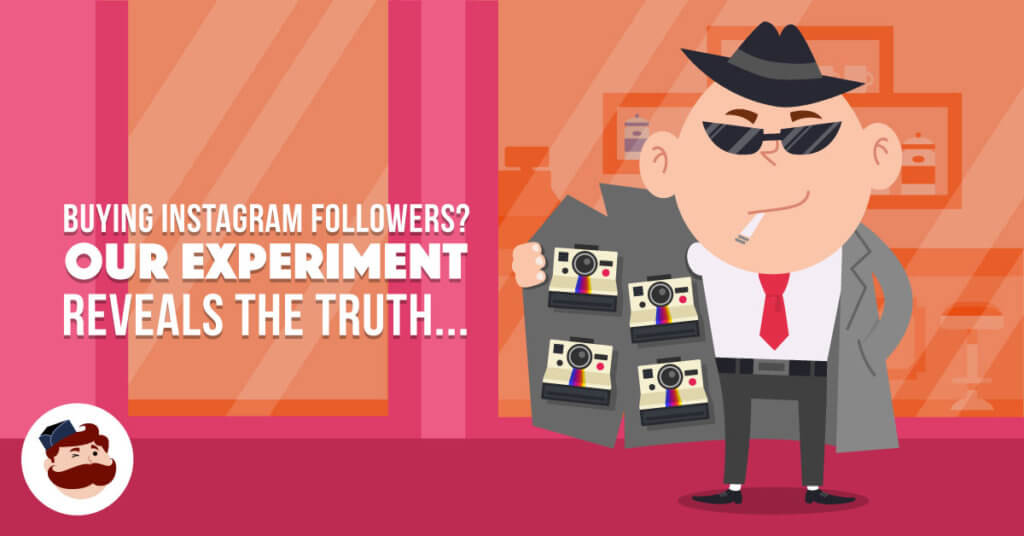 With Instagram standing as one of the top sales platforms for e-commerce, the temptation to buy followers has never been stronger.

Get more followers, and even if they’re “fake”—the thinking goes—real people will take notice and start to shop in your store.

But does this theory hold any water? We set up an experiment to find out.

So, What’s the Deal with Buying Followers?

There are generally two ways to buy Instagram followers:

This method seems easy and cost-effective, with several services offering 1,000 followers for $12.99. The bad news is that Instagram has been known to crack down on fake accounts. We didn’t test this tactic out—since the “followers” are shell accounts, they clearly aren’t going to drive revenue or engagement for your business. It’s also an easy way to get banned.

Within this cycle, people will see that your account followed them, check out your page, and give you a follow. This technique works because it plays off common Instagram etiquette—follow me, and I’ll follow you back—but here the other account gets unfollowed after a few days. You can choose how fast you want the bot to work, but it’s generally faster than what your crazy-dedicated intern could do on a few energy drinks. This method can range from $2.99 per day to $99.99 for 30 days.

We decided to go with the latter of the two options because it was more likely to actually work as a method of increasing our brand’s social media strength, given that our followers wouldn’t just be a bunch of empty accounts.

The experiment was relatively straightforward. We set up a real Instagram account with a store attached and track our follower count, engagement, and conversion rates. Then we would use a bot to ramp it up and (theoretically) gain followers at super speed. Finally, we’d compare the results of the bot with the original organic results.

In this experiment, we will measure: 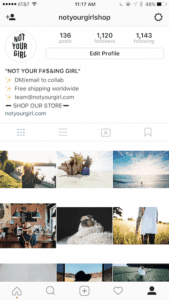 All the images are high quality, and we posted regularly, but not excessively—about once per day. The Instagram is linked to an online shop where you can buy some branded Not Your Girl gear and a few other items. 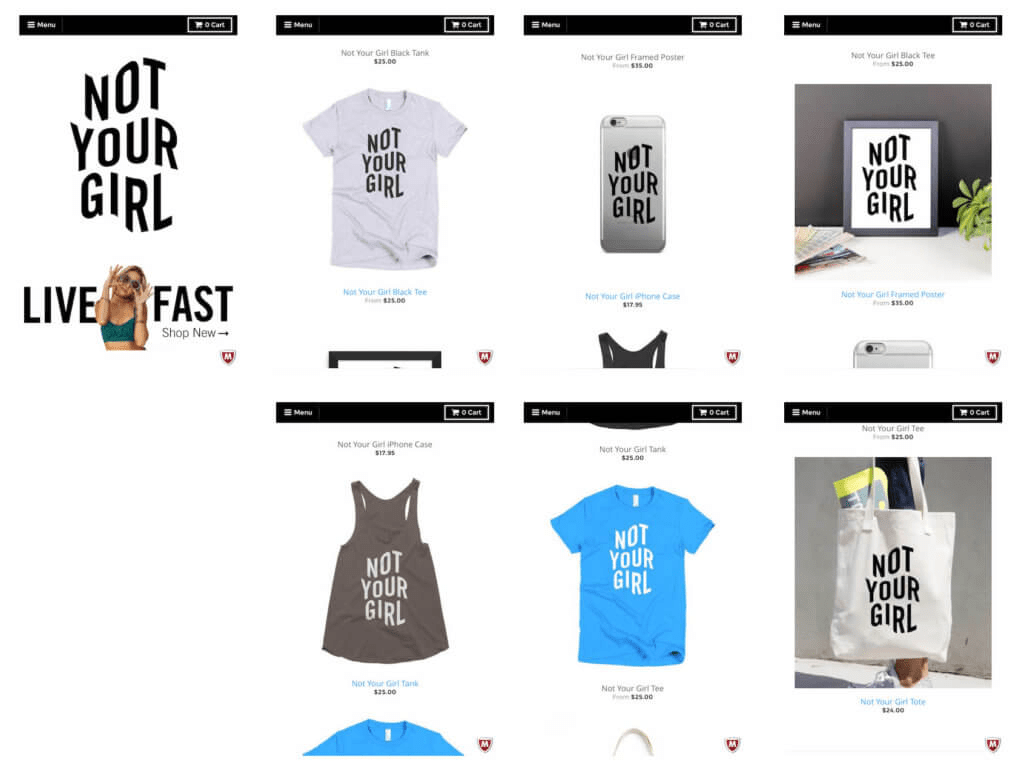 We also used a bunch of hashtags on each post, to help the organic aspect of our growth. We used the same hashtags throughout the entire experiment, to keep everything but our follower-gaining tactics consistent. 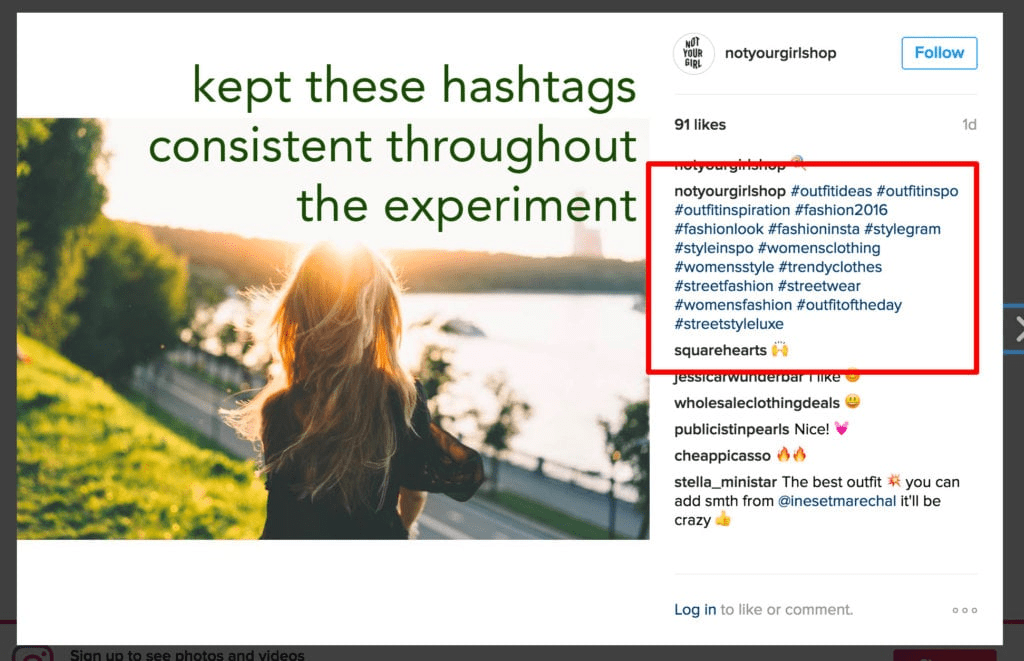 Those users then saw that we had engaged with them, and hopefully followed us back.

We didn’t go in and comment on posts or DM any of the people we followed, because we wouldn’t have been able to keep that consistent with our bot.

We temporarily stopped gathering new followers and posting before we switched over to buying followers. This gave us a nice clean break when we went back to look at our results — there is no overlap at all between our bot results and our human results.

There are a lot of bots and services out there you can use to buy Instagram followers. These types of services are abundant, and often seem pretty fake. We used Boostgram, which claims to help you fully automate your account and give you “real followers, likes, and comments.” The monthly cost for Boostgram is $99 and up.

It’s pretty easy to set up: you link your Instagram account with Boostgram in their dashboard, choose some quick settings, like how fast you want the bot to run, and you start “generating” followers.

The generation process is pretty much the same as what you would do yourself (find, follow, unfollow) but much faster. We targeted people following four popular stores that have the same target audience as Not Your Girl. We didn’t use any of Boostgram’s other targeting options (gender, location, etc.). 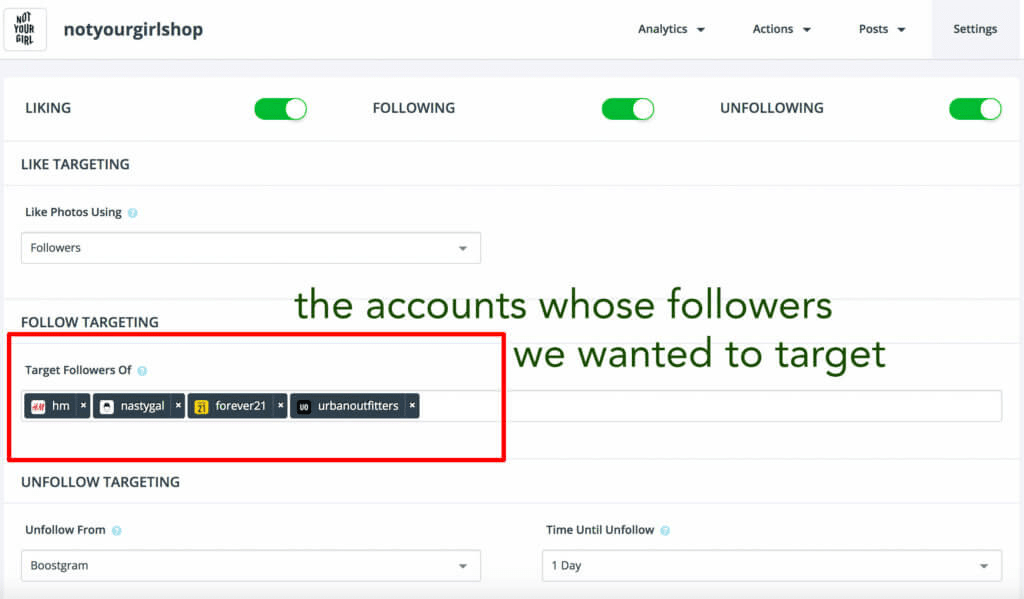 Bot or Not? The Results Of Our Experiment

Since the regular method ran longer, it makes sense that it would gain more followers overall. Also, at the very beginning of the Not Your Girl Instagram we had three days of +20 follower gain, which skewed the results a little. Even considering that, the regular method still won, gaining an average of 9.3 followers per day, while the bot method gained an average of 4.1. 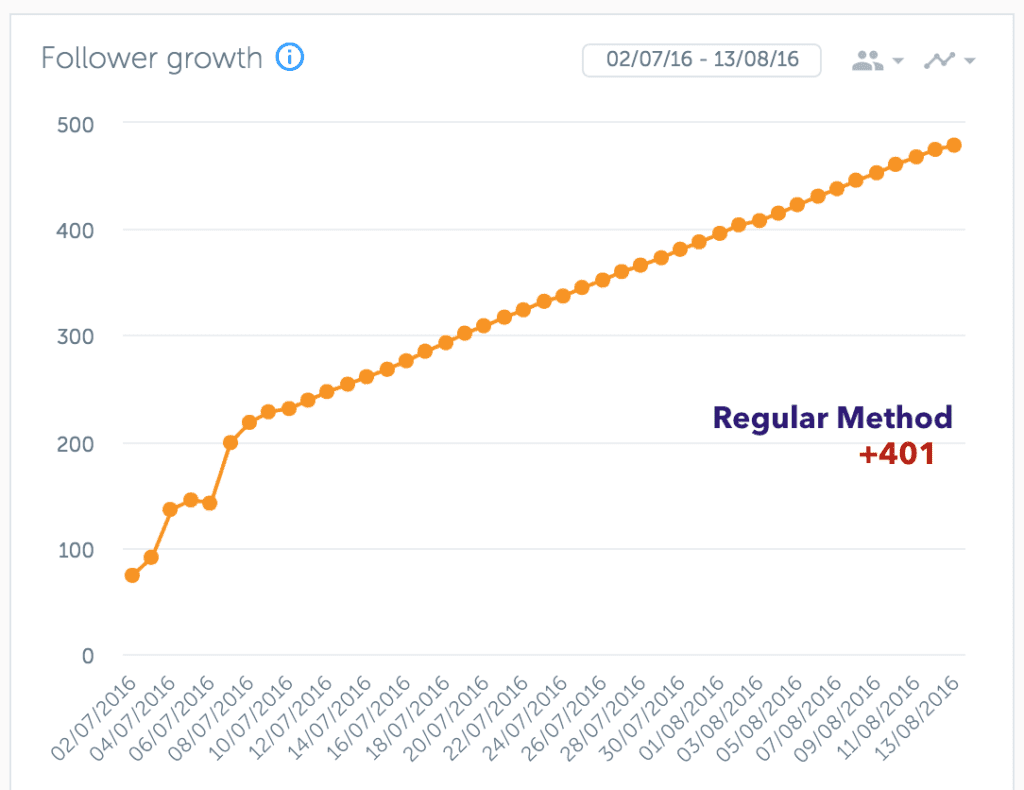 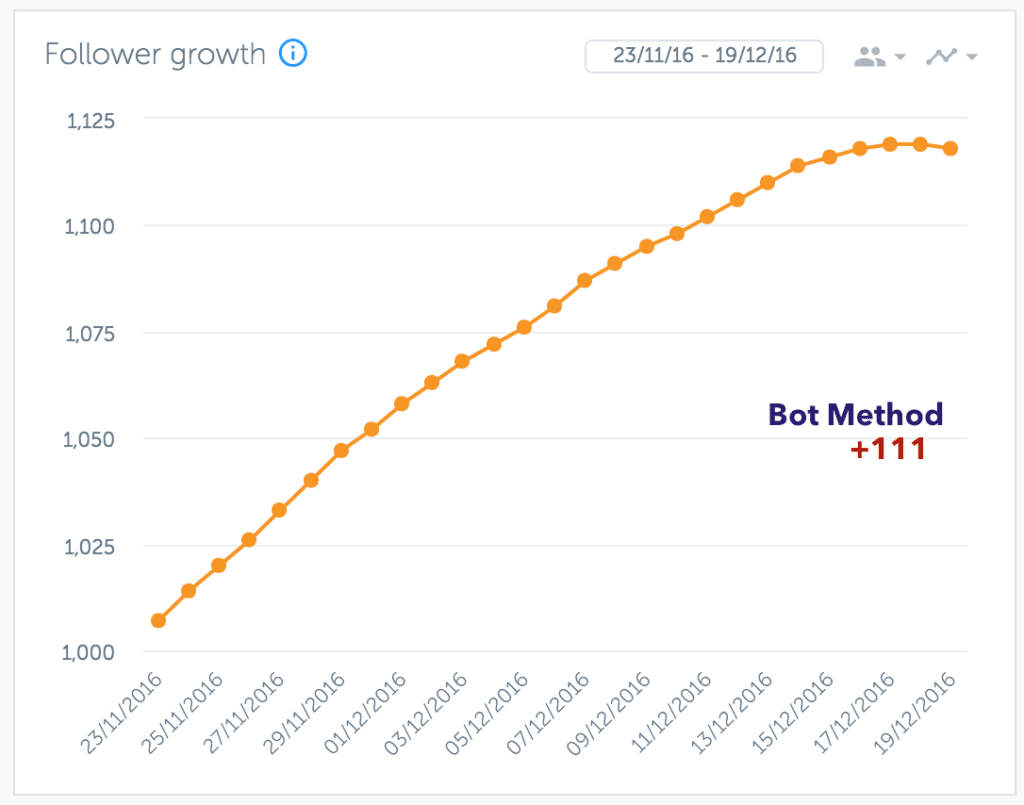 There’s no denying that we saved time with the bot. But results don’t lie: the regular method clearly beats the bot when it comes to acquiring followers, even though the bot was “working faster” than a human.

Once again, the regular method beat the bot method. 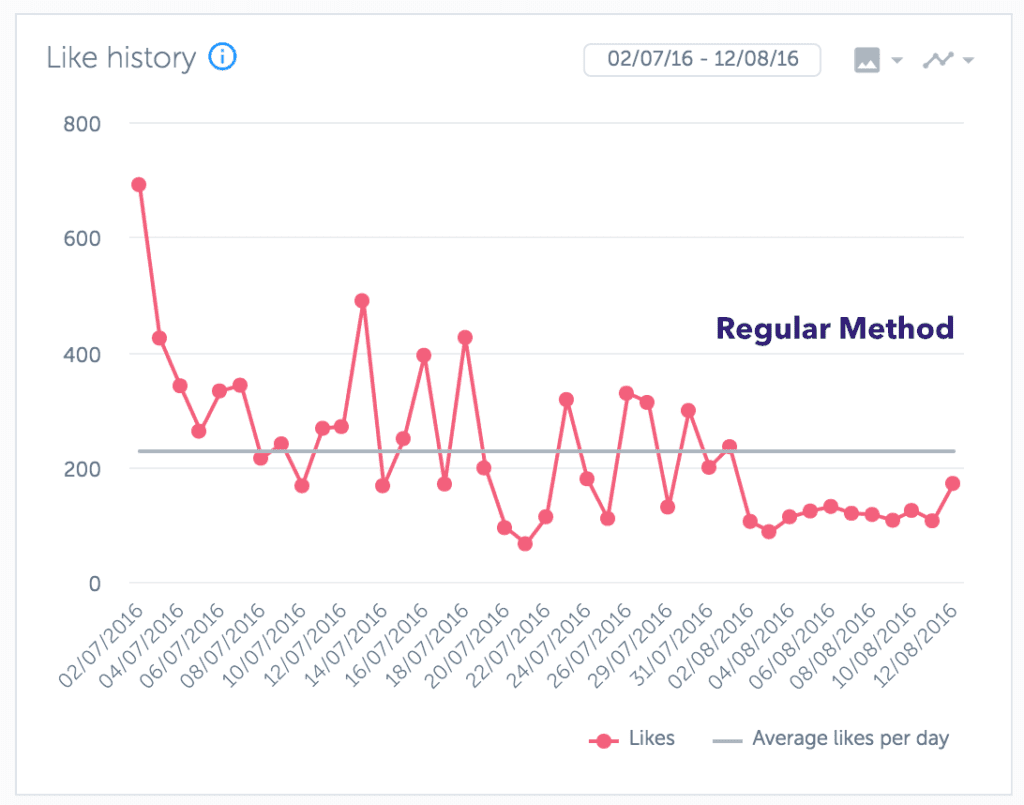 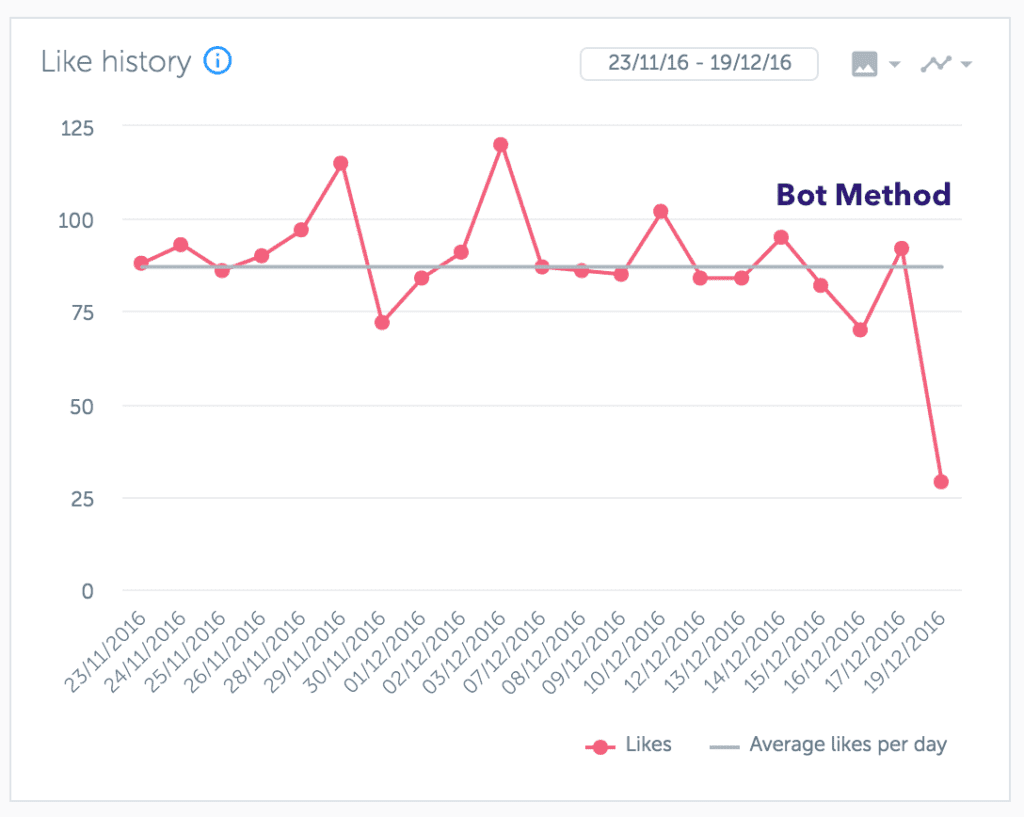 The average likes per day for the bot doesn’t crack 100, but the regular method garners over 200 likes a day—that’s double the likes.

Comments are a similar story. 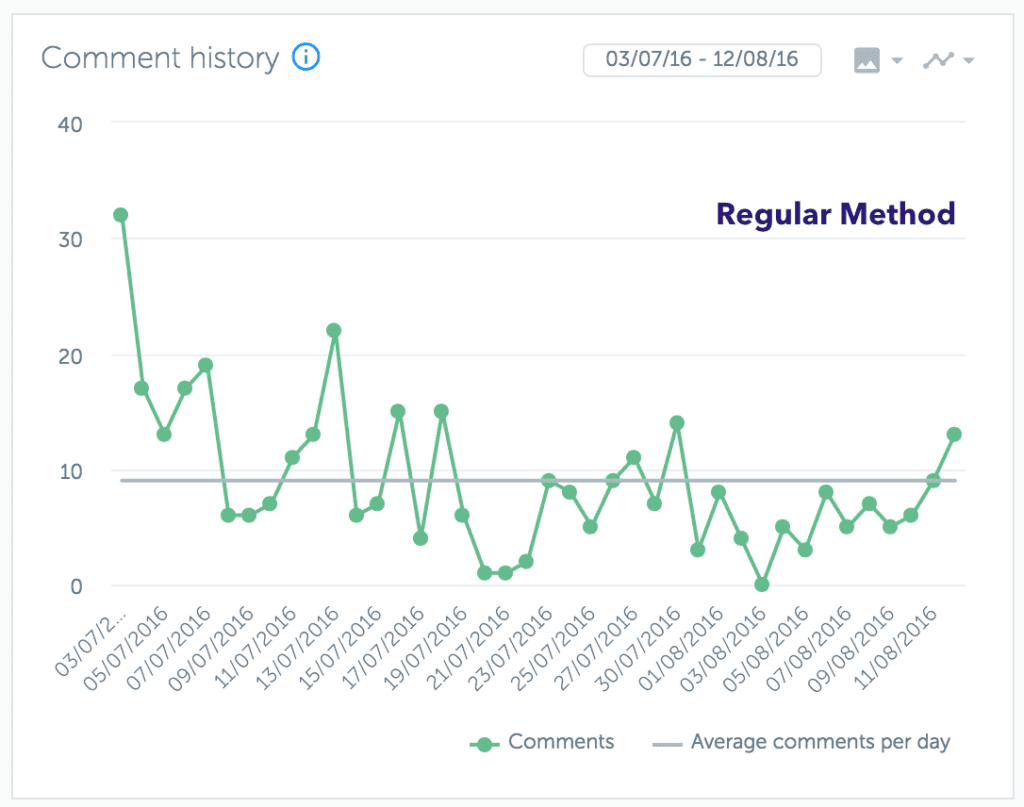 For the regular method, we cut off the first day because it was an outlier and skewed our graph, which is why this starts on the 3rd of July instead of the 2nd. 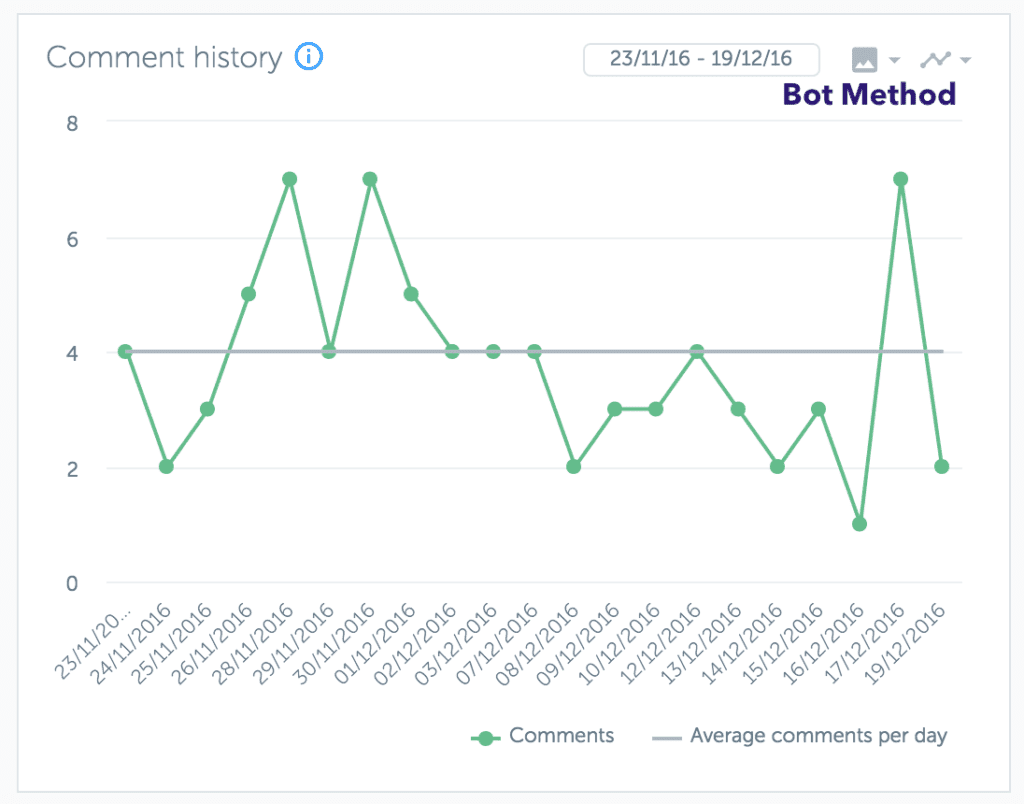 To figure out your engagement rate, combine the number of likes and comments on a post and divide by how many followers you have:

Even though the bot was following real people, our engagement rate still saw a significant drop compared to our non-bot efforts.

While we didn’t rake in the dough with either campaign, there was a definite difference in number of customers who visited our web store from our Instagram when we used the bot and when we didn’t. 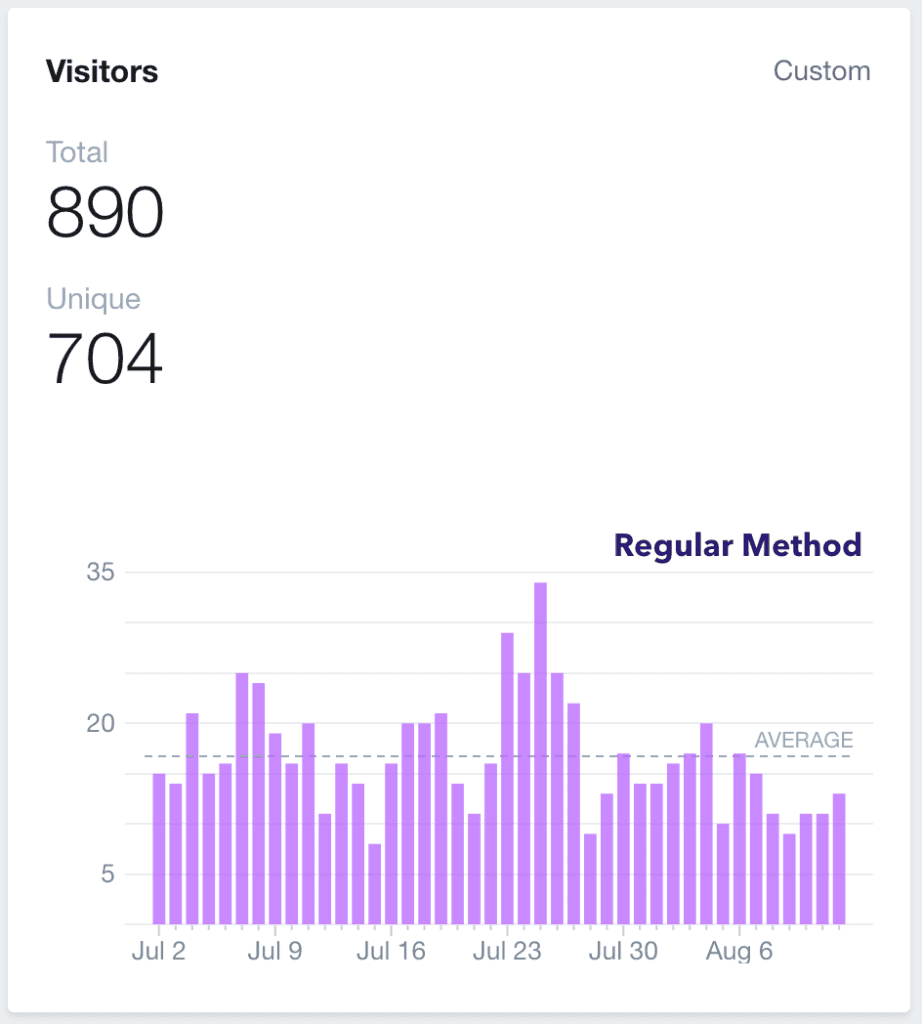 The regular method averaged between 15 and 20 visits a day to our online shop. 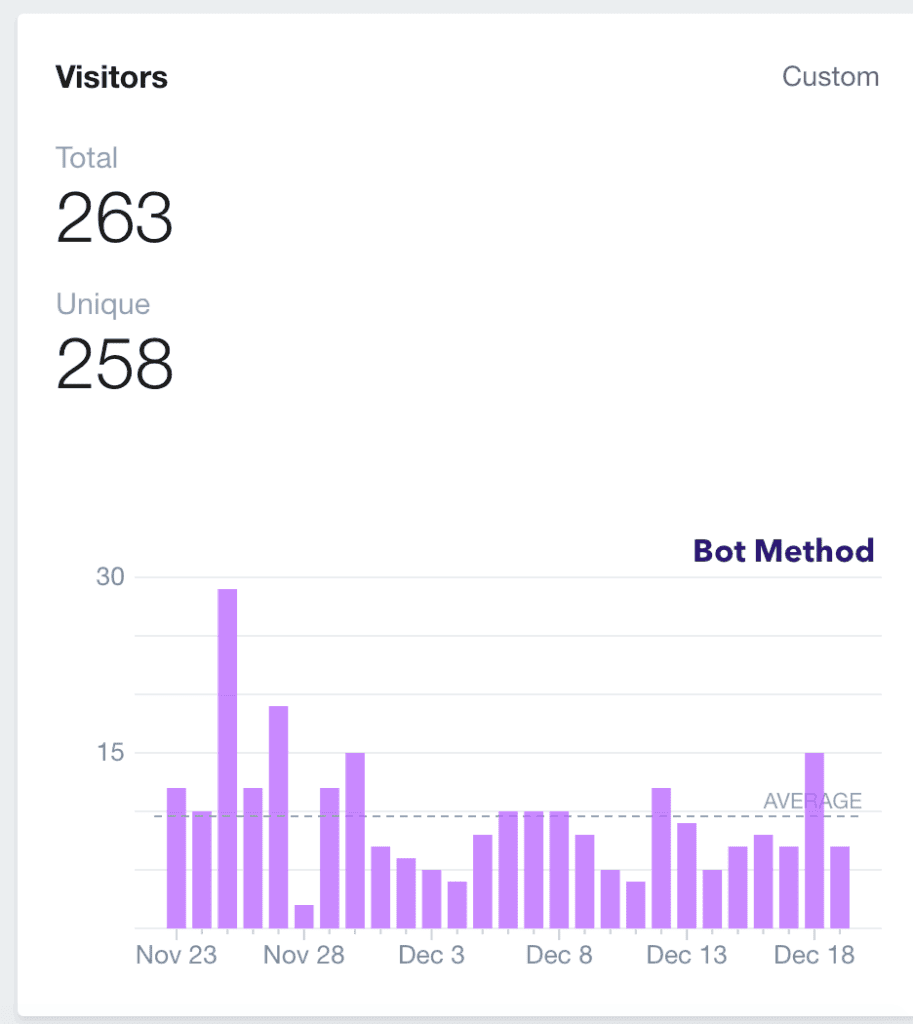 Meanwhile, the bot averaged between five and ten visitors a day. Again, regular outperformed the bot.

And the trend just continues.

The regular method actually drove interested customers to our shop—ones that put items in their cart and purchased. We got consistent sales throughout the month or so of the regular method part of the experiment. 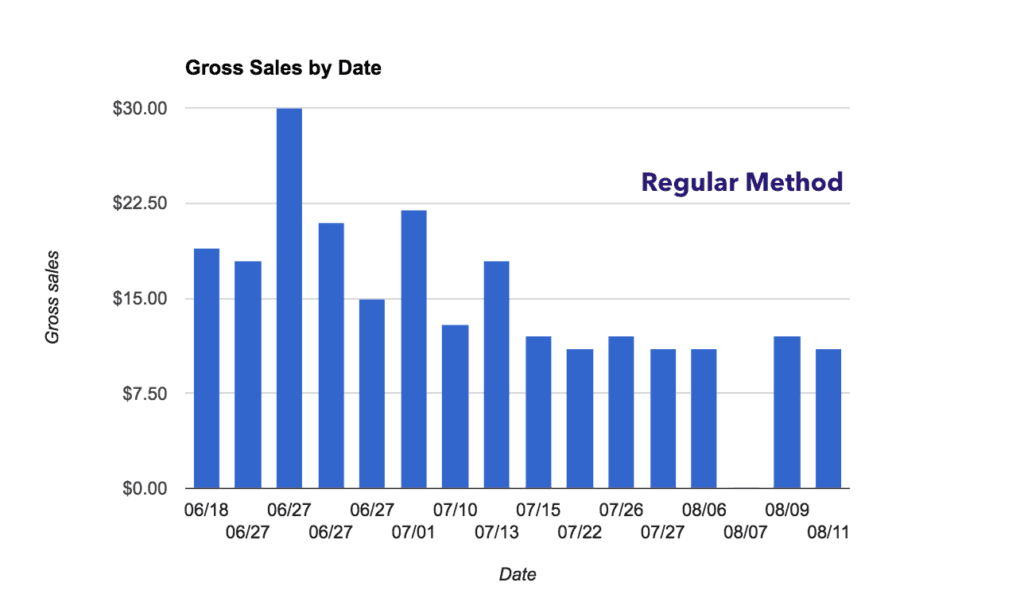 The bot, meanwhile, didn’t gain us a single purchase, and only led to one visitor adding something to their cart. 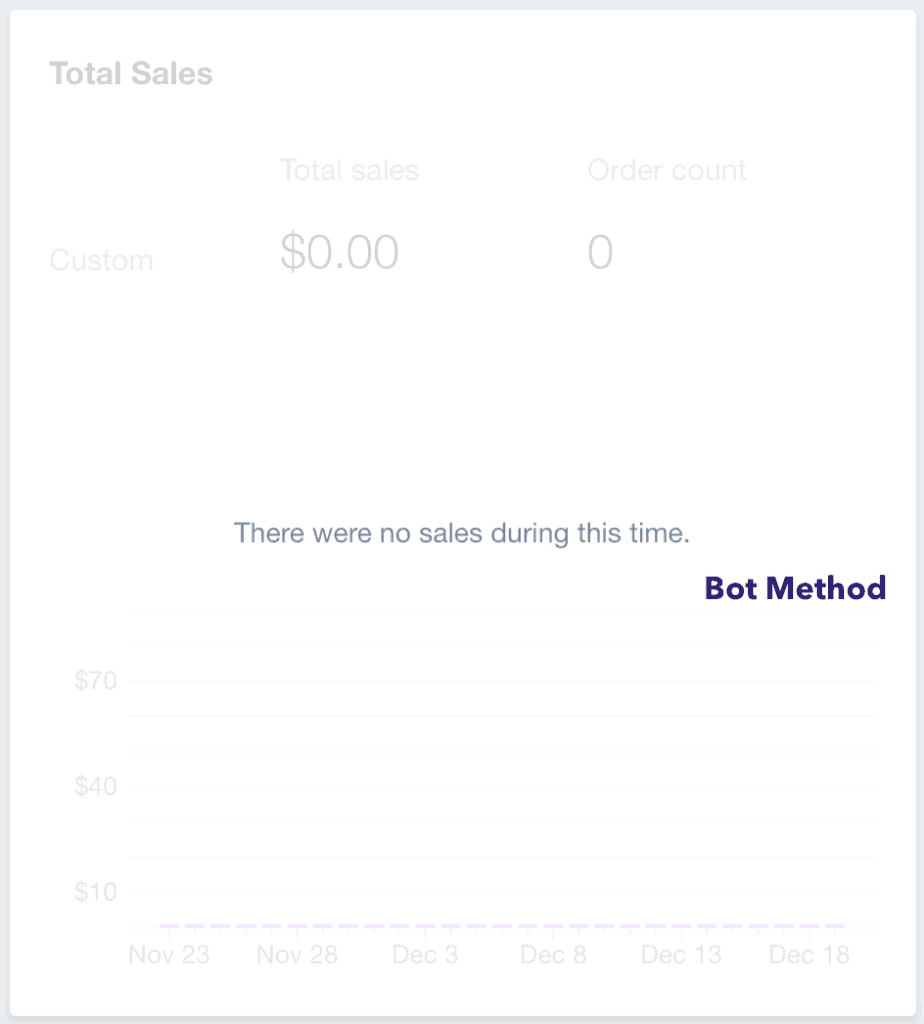 “There were no sales during this time,” is something you never want to see as a business and a massive demerit for the bot.

The types of people who were following our Instagram and visiting our shop during the regular method were people who were actually interested in our product, which is exactly what you want when you’re building a follower base on social media.

Here’s the takeaway: When you’re starting a new social media account for your business, build social proof by having engaged customers and authentically connecting with people who follow you. Don’t try to buy Instagram followers.

You Can’t Bot Your Way To A Business

Bot-produced followers might boost engagement on the surface, but they don’t care about your business. They won’t buy merchandise or talk about you to their friends.

During the bot portion of the experiment, we weren’t going out and engaging with potential fans of the shop and trying to get them to follow us back—we were relying on the bot to bring us customers. The result? We didn’t sell any merchandise during the period of trying to buy Instagram followers (via the bot), and our engagement rates dropped.

Why Did the Bot Fail?

Why the bot performed worse than the regular method could come down to a number of things.

Get on Instagram. Post every day. Get followers. Cash out—that’s how building a business on social media works, right?
Karen Horiuchi of Glambot disagrees. 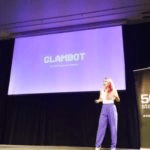 Although an impressive following on Instagram is nice to have and gives the appearance of success, what really matters is money in the bank.
An e-commerce startup needs to focus on revenue through conversion. Survive first, then flaunt later.”

Flaunt later? That seems too easy for someone who’s already succeeded on social media to say!

Building a brand on social media isn’t about getting more followers than everyone else, it’s about getting into a niche market and building connections with real people that appreciate your product and—most importantly—are willing to spend money on it.

While there’s a lot that technology can do, a robot still can’t find that sweet spot without help from humans. Organic interaction with users is the only way to learn about your followers and define your niche in the market.

Even though it may seem daunting to set out a plan to increase your follower count on Instagram, a little strategic planning and some elbow grease will get you the followers—and customers—of your dreams faster than a bot ever could.

What do you think? How do you grow your follower base on Instagram? Have you ever tried to buy Instagram followers? Did it work for you? Share your story with us!