Facebook Lookalike Audiences are an excellent way to reach people who are similar to your existing customers and followers.

When creating a Facebook Lookalike Audience, you can choose between a range of 1%-10% of the total population in your chosen target country, with 1% being those who most closely match your source. 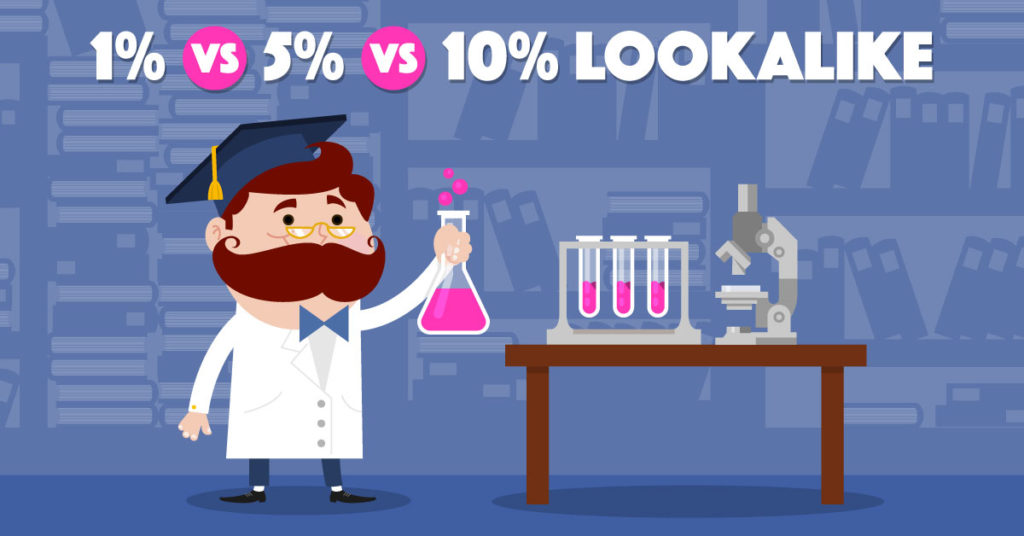 We bet you’ve been wondering which percentage is the optimal option.

Should you select 1% to target only the most potential buyers or expand your Lookalike Audience further to 5% or more?

We set out to find the answer.

In this month’s experiment, we tested three Facebook Lookalike Audiences to see whether targeting 1%, 5% or 10% of people work best.

The results almost matched our hypothesis that “the bigger, NOT the better.” To find out more, read the full article.

Hypothesis and Experiment Set Up

Our hypothesis was that the smaller the Lookalike audience, the better the results.

To begin with, Facebook’s algorithms are super smart, and we believed that they could detect the most potential target audience based on existing data.

As we created a Lookalike Audience out of 1% of the country’s population, we thought Facebook would concentrate all the best prospects in this audience.

Consequently, in OHO a 10% Lookalike audience would include more people that aren’t interested in our offer.

We decided to run an experiment with our own lead generation ad campaign featuring the Facebook Ads Bundle – a collection of our all-time top eBooks.

We conducted a 14-day Facebook ad A/B test to find out which Lookalike Audience has the lowest cost-per-conversion and cost-per-click.

To ensure the correctness of our A/B test results, we kept all the other ad campaign elements the same, except the ad set audiences which we wanted to test. We also tested Mobile vs. Desktop ad placement. As a person clicked on the ad, a download box popped up where people needed to enter their email and name. For most Facebook users, these forms are pre-filled, and all that needs to be done is to hit the “Submit” button. After someone had entered their credentials and clicked “Submit,” the download of our Facebook Ads eBook bundle began.

By the way… In case you’re wondering whether Facebook Lead Ads work, we also did an experiment to test this hypothesis. We found out that Lead Ads performed just as well as ads with a landing page. Read about the experiment here: Landing Pages vs. Lead Ads: The $2,000 Facebook Experiment

To set up the campaign, we used the best Facebook A/B testing tool – AdEspresso. We recently made audience testing even easier, so do check it out!

For ease of testing, you can create one campaign and split test the audiences against each other. We went over the top and did three different campaigns with a unique lead form in each – which was a waste of time and a mistake on our end! The results will be identical either way, so we highly advise you keep it simple with AdEspresso and split test your lookalike audiences within the same campaign.

As we’ve seen the best results while advertising on Mobile and Desktop News Feed, these are the placements we chose.

We were also curious to see whether Desktop or Mobile Facebook Lead Ads work best, so we decided to also A/B test the ad placement.

The daily budget for each ad campaign was $35. As all the campaigns were active for 14 days, the total experiment budget was around $1,500.

We used Facebook’s automatic bidding options and optimized our ads for lead generation, which means we paid per impressions.

As we mentioned earlier, it’s best not to experiment with too many campaign elements at once. Otherwise, you might have the same problem as marketing pioneer John Wanamaker who said:

“Half the money I spend on advertising is wasted; the trouble is I don’t know which half.”

Our advertising goal was to get new leads that were similar to our existing customers.

So, we created Facebook Lookalike Audiences based on a Custom Audience of past converters.

All our Lookalike Audiences were targeted to the USA, meaning that even the audience targeting 1% of the country’s population included 2.1 million people.

Our first Lookalike Audience targeted 1% of US population that most resembled our existing customers.

The second Lookalike Audience was larger, targeting 5% of the US population.

The third Lookalike Audience we tested targeted 10% of people in the US most closely matching our client base.

As we wanted to ensure that our current customers, trial users, and people who already had downloaded the eBook won’t see our ads, we excluded them as Custom Audiences.

Which of these three audiences delivered the largest number of new leads at the lowest cost-per-conversion?

During the 14 days of campaign runway, we were anxious to learn if our initial hypothesis was right. And I bet you are too. It’s time to reveal our findings!

It was hard to tell the results before the end of campaigns because, as you can see, the campaign results were kind of “jumpy.”

It’s a good thing we were using AdEspresso for campaign management as we were later able to use the Campaign Comparison feature. After analyzing each campaign’s results, here’s what we found:

As you look at the campaign comparison, there are even more fascinating insights waiting to be uncovered. Key Takeaway: It makes sense to create smaller Facebook Lookalike Audiences as they deliver higher campaign ROI (at least in the short term).

Make a guess: Were people more likely to click on our Lead ads and download our eBooks on Mobile or Desktop?

The correct answer is -Mobile.

Across all three lead generation campaigns, Mobile outperformed the Desktop ad placement by more than 45%.

If you look at the campaign timeline of one of the test variations, you’ll see that Mobile was constantly performing at a higher rate.

Here’s another takeaway from our experiment: the campaigns performed at the same rate throughout the 14-day period.

As you can see from the chart below, the cost-per-lead remained at the same level for all 14 days.

What’s interesting, is that the click-through rate started to improve as the ads were delivered to more people.

This is an excellent example of how Facebook’s algorithms learn from your ad delivery and your results, and start to eventually deliver the ads to people most likely to click and convert.

When creating Facebook Lookalike Audiences, it’s best to keep them small rather than target 10% of a country’s population.

This actually makes a lot of sense, since Facebook creates Lookalike Audiences based on people’s similarity to your Custom Audience.

Another thing we learned is that when targeting relatively large audiences, your Facebook campaigns perform well even after a 14-day runway. However, it’s best to keep some auto-optimization rules and alerts turned on, just in case of a drop in performance.

If your goal is to target the most potential lead prospects, you should create Lookalike Audiences targeting 1%-2% of a country’s population, instead of aiming for 10%.

And -for best results, don’t forget to exclude Custom Audiences of people who have already converted!

Unsure where to start? Read our guide to Facebook Custom Audiences